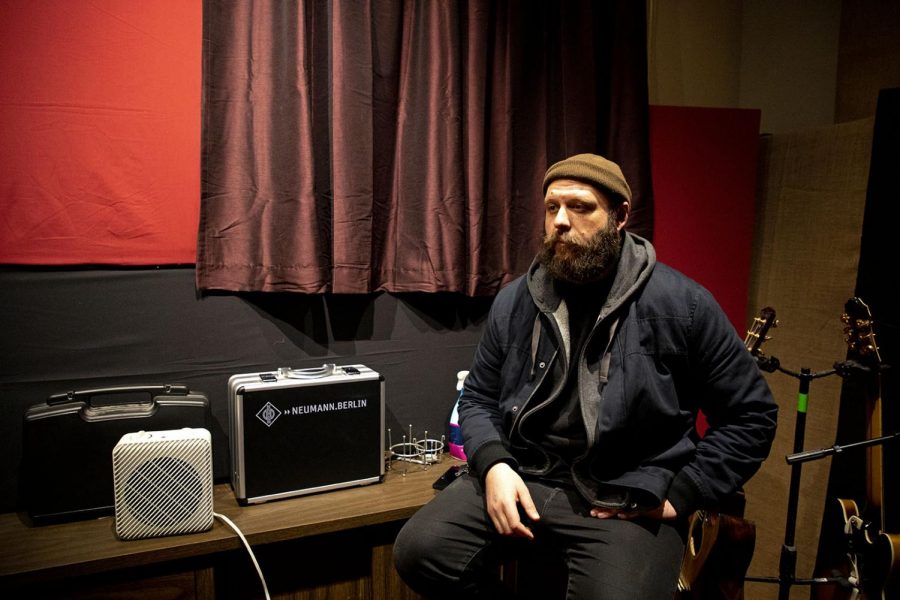 Justin Eckert, owner of NF Records, opened his recording studio in 2016. Eckert started off learning guitar when he was 4 and was inspired by the production side of music which lead him to where he is now in Bowling Green.

Nameless Faceless Recording Studio, or NF Records, was named for the audio engineers and producers in the music industry that are often behind the spotlight—something that owner and head audio engineer Justin Eckerd prefers.

Though Eckerd grew up moving from city to city, he spent most of his formative years in Kentucky. After his basic training in the National Guard, he went to the University of Louisville but said it didn’t fit what he was looking for. He left to work in Fort Knox as a government contractor until one of his friends convinced him to go to WKU in 2008.

Eckerd attended WKU for about two years until he was deployed to Iraq, which he said “threw a wrench” into his college career.

Eckerd said he returned to Bowling Green, his home for the past 11 years, with the “headstrong idea” of finishing college and pursuing music, which he always wanted to do.

Eckerd was 4 years old when his parents bought him Fisher-Price toy instruments, and he taught himself guitar during his childhood. He played in his church’s band and started asking questions about the production side of music. Eckerd said he fell in love with it.

Eckerd established the name NF Records in 2015 and began recording out of his house while he worked as a car salesman. He said he wasn’t driven enough to pursue music full-time until he ended his engagement.

Eckerd said he was supposed to get married in August 2016, but he opened NF Records’ commercial location instead.

“It put me in a really kind of lonely place, but at the same time I was happy because I was pursuing this full time,” Eckerd said. “So I took all of that negative energy—everything that was happening around me in my environment, all that hurt—I took it and channeled it into this.”

Over two years later, Eckerd runs NF Records out of its downtown location full time. He said he wants it to become “bigger than life.” NF currently serves around 200 clients.

With his dog Blackwell by his side, Eckerd has recording sessions almost every day. He said he wants to make his clients feel at home and makes every interaction encouraging. Because of this, he has been called the “DJ Khaled of Bowling Green.” Eckerd said he drew inspiration from Khaled’s charisma and work ethic.

Eckerd said one of his recent clients was struggling with the impending death of his mother. The client and his half brother, who also lost his mother, worked with Eckerd to record a song about their mothers. Eckerd said the atmosphere in the studio was heavy and set a kind of reverence.

“I was kind of in a way thankful that I was part of their lives in that moment,” Eckerd said. “It was very rewarding to be a part of that and give them a product that they can be absolutely proud of for ages. Something they can go back and listen to and reminisce on.”

Allen Witcher, who makes music under the name The Vinci, said he has known and worked with Eckerd since the studio opened. Eckerd said Witcher is very similar to him, and they quickly became friends.

Witcher said Eckerd does work in nearly all genres and can match each client’s vibe.

“He’s a musician that can fit anything an artist brings,” Witcher said.

Eckerd said he anticipates NF Records expanding to larger cities, but he wants Bowling Green to remain its home base as a way to give back to the people that gave to him.

“There’s been so many pioneers, so I won’t say I want to pioneer a change in Bowling Green,” Eckerd said. “I think I want to be the guy who steps up and takes control of the change.”

Eckerd said there have been Bowling Green musicians who found success in the industry and moved away without returning to help the music community.

“I want to expand the name for sure but always bring it back to Bowling Green,” Eckerd said.

Features editor Laurel Deppen can be reached at 270-745-6291 and laurel. [email protected] Follow her on twitter at @laureldeppenwku.