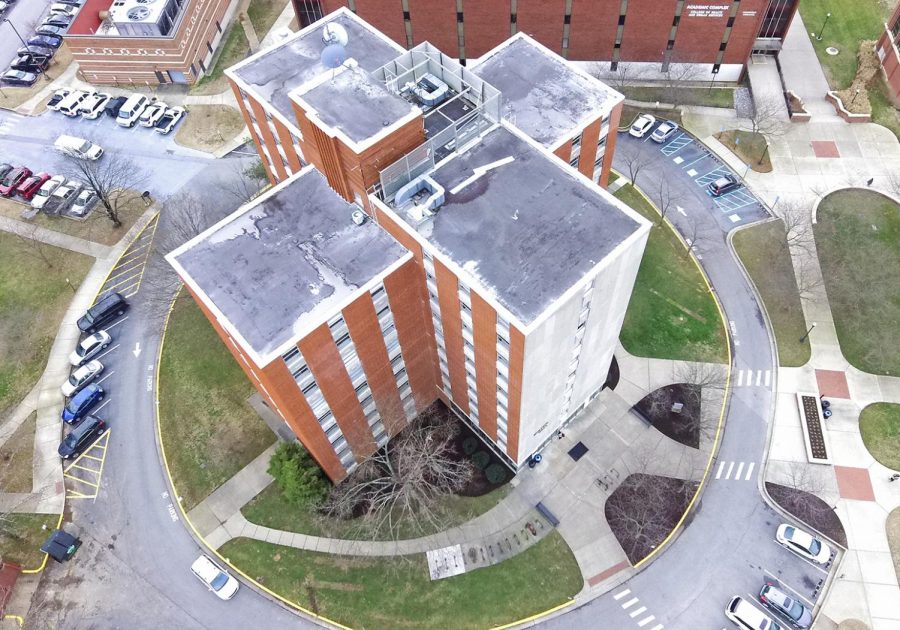 WKU announced Minton Hall would remain closed during the Spring 2019 semester due to necessary work to prevent mold. Residents were initially relocated in November due to mold outbreaks.

Due to outbreaks of mold across campus and the closing of Minton Hall for an additional semester, the process of responding to maintenance requests will now go through the Department of Facilities Management rather than Housing and Residence Life.

In a meeting with the Herald editorial board last week, President Timothy Caboni said this was one of the major changes to prevent further large-scale outbreaks of mold. He explained he wants the same quality of upkeep and maintenance for the residence halls as all other buildings on campus.

“That is the bigger issue we are attacking head-on,” Caboni said.

Caboni said the change was implemented at the end of the fall 2018 semester. Previously, students could place maintenance requests online or with their resident assistant. These requests were initially done through a paper system, but HRL recently switched to digital reports which could be viewed through the InSite database.

A Herald investigation in November 2018 found that over 500 maintenance requests regarding mold were discovered on the database. Reports were found in every dorm on campus. More than 8 percent of requests analyzed were marked as “completed” or “closed” on Sept. 13, 2018. Some of the requests dated back to 2017.

In November, 348 Minton Hall residents were relocated to various dorms across campus. Originally, the plan was to have those students back in the hall for the spring semester. Two days before residence halls reopened to students, the university announced Minton Hall would remain closed until the spring 2019 semester.

The announcement on Jan. 16 upset several students living in the dorms who expected to return after first moving out in the final weeks of the fall 2018 semester. Caboni said the university first learned of an issue in Minton on Jan. 15 and decided to close the hall for another semester the next day.

“I had taken the time off Tuesday to pack everything from my old room in Rodes, and to hear that I wasn’t going back to Minton was really disappointing,” Gilstrap said.

Gilstrap said she was disappointed by the lack of communication between WKU and Minton residents.

“There are improvements that can be made with mass communication and letting us prepare better,” she said. “It’s been a very stressful experience for all of us in the honors college, having Minton taken away twice with little time to prepare.”

While the university thought Minton was on track to be reopened on time, Caboni said mold measurements cannot be taken until after the removal process. Once it realized the hall needed additional work, it decided it would be best to remain closed to prevent another move during the semester.

“You can’t just say you’re a student-centered university,” Caboni said. “You have to walk the walk, not just talk the talk, and what’s most important is that the decision we made is in the best interest of the health and welfare of our students.”

Due to the opening of Hilltopper Hall and persistence rates from first to second semester, Caboni said there was some automatic flexibility which allowed the university to close Minton for another semester without having issues finding places to put students.

To help former Minton residents, Caboni said the university has discussed implementing free laundry throughout the semester. Conversations about giving additional credit to Minton residents are ongoing. When students were initially moved from Minton in the fall, they were given $1,000 in credits for spring semester housing.

No matter where the student was relocated, Bob Skipper, director of media relations, said students would pay the discounted Minton rate of $1,245.

Caboni assured everyone was working tirelessly to open Minton for students, and the university spared no cost.

News Editor Rebekah Alvey can be reached at 270-745-6011 and rebekah. [email protected] Follow Re- bekah Alvey on Twitter at @bekah_alvey

Assistant News Editor Emily DeLetter can be reached at 270-745-6011 or emily. [email protected] Follow her on Twitter at @emilydeletter.