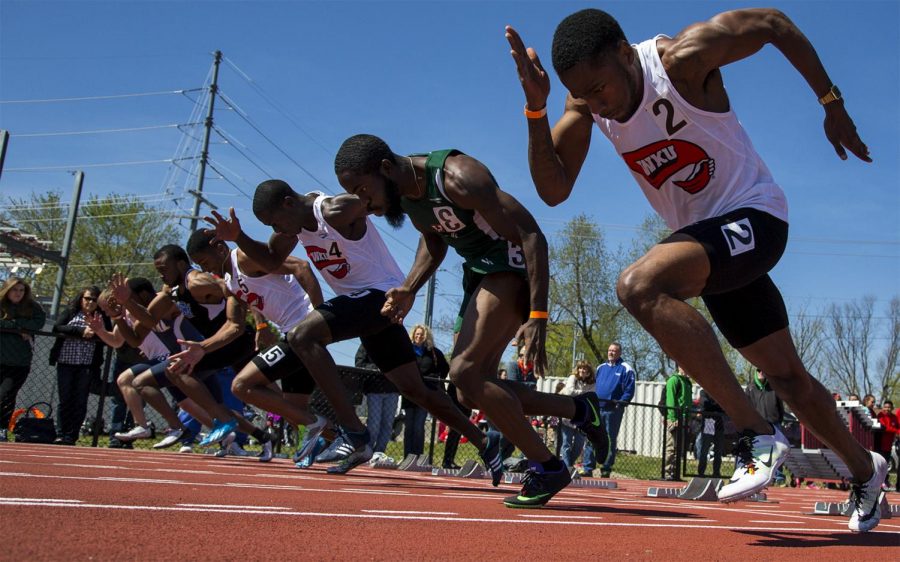 During the Men's 100 Meter Dash, WKU senior Ja'Karyus Redwine, right, finished in 6th with the time of 10.77 seconds at the Hilltopper Relay Meet at Charles M. Rueter Track and Field Complex on Saturday, April 9, 2016. (WESTON KENNEY/HERALD)

The WKU track and field team announced its schedule for the 2018-19 season on Thursday, with the Hilltoppers set for eight meets in Kentucky and Tennessee this season.

The Hilltoppers will start the season off with an indoor meet at the Vanderbilt Indoor Opener on Saturday, making it the sixth-straight year the team will begin its season in Nashville.

The Hilltoppers won’t have another meet after this through the holiday season, but will continue their meets on Jan. 12 at the Gene Edmonds Open, hosted by Purdue in West Lafayette, Indiana.

The Hilltoppers’ first meet in Kentucky will be the Rod McCravy Memorial Invite in Lexington.

The teams will then head to Birmingham, Alabama, Boston, and back to Birmingham again before returning to Nashville on March 22-23 for Vanderbilt’s Black and Gold Invitational in Nashville.

After the Pepsi Florida Relays in Gainesville, Florida, WKU will invite teams to Bowling Green for two days of competition on April 5-6.

Two weeks later, the Hilltoppers will split the team and travel to Atlanta and Torrance for the Georgia Tech Invitational and Mt. SAC Relays on April 19-20.

The squads will split again the next week, as some members head to Philadelphia for the Penn Relays, while others will compete in Louisville for the Lenny Lyles/Clark Wood Invitational on April 26-27.

The Hilltoppers will all untie together the week after as they end the regular season at the Kentucky Relays in Lexington.