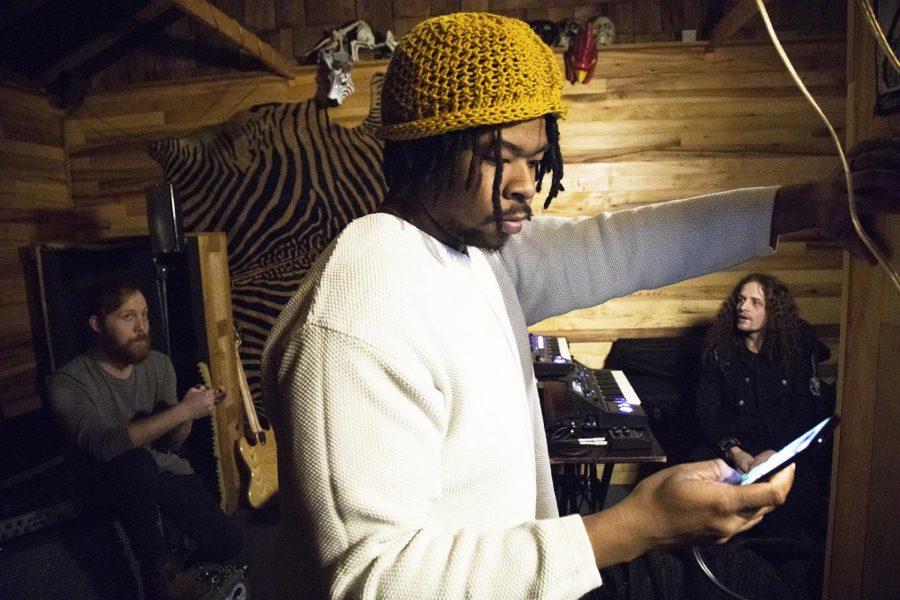 Lee Williams, left, Reuben Bynes, center, and Scott Gardner, right, have been a part of the band Waco Bell for the past two years. Lee plays bass, Gardner does instrumentals and Bynes raps for the group. “I knew we made it when I googled our band name and they didn’t autocorrect it to ‘Taco Bell.’ That was a year ago,” Gardner said

A standard music album features 10-to-12 separate recordings issued as a collection on potential mediums like CD, vinyl and online music platforms. An extended play record or EP is similar but typically features four-to-six recordings. At eight recordings, local hip-hop group Waco Bell’s latest release, “Black Matters,” is a bit of an outlier.

Released on major music platforms like Spotify, Apple Music and SoundCloud on Oct. 20, production for “Black Matters” began in November 2016 shortly after the 2016 United States presidential election. Waco Bell frontman and rapper Reuben Bynes, 23, of Bowling Green wrote much of the album’s lyrics in consideration of the recent election and other social issues in America.

Though Bynes had written primarily short stories and poetry before meeting with Waco Bell keyboardist and producer Scott Gardner, 30, a Bowling Green resident, in late 2014, he had grown interested in writing raps during his teenage years and saw an opportunity with Gardner. Bassist Lee Williams, 27, of Bowling Green joined the group soon after.

First releasing its debut mixtape, “m.t.tendencies,” to music sharing sites like Bandcamp and SoundCloud in September 2015, the group has released two singles, two EPs and “Black Matters” since then. Bynes said each release is a manifestation of what the group was feeling and thinking at a given point in time.

“I’m taking these memories, these experiences, these thoughts that I’ve had and putting it permanently out there,” Bynes said. “It’s always going to be there as kind of a reminder of where I was at.”

As a black artist in Bowling Green, Bynes said “Black Matters” allowed him to express his ideas regarding racial and social injustice he’s experienced and witnessed throughout recent media. The album’s opening track, “Heartbroken,” attacks this issue head-on. The song’s hook and ending lyrics, “We just want to feel safe inside America / We heard it was great inside America,” are particularly evocative.

In order to best understand the significance of each song on the album, Bynes said he hopes listeners will stick with “Black Matters” from start to finish. At a total runtime of just under 30 minutes, Bynes said he believes each song works best when taken not individually but as part of something bigger.

“I think that it can kind of change your perspective on what each song is or where it sits in significance when you actually listen to the full piece,” Bynes said. “We’ve got things kind of positioned so that it feels like it moves and tells a story, and a lot of the things are continuous throughout the tracks.”

Though Gardner and Williams performed in nationally touring alternative rock band Sleeper Agent, a now-defunct Bowling Green band that gained success in the early 2010s and performed on both “Late Night with Jimmy Fallon” and “Late Show with David Letterman,” before joining Waco Bell, each member said Waco Bell has provided him a chance use music for a greater purpose.

Though many of the concerns discussed in “Black Matters” pertain not only to people of racial minorities, Williams said his main goal with Waco Bell is to help Bynes share his voice.

“At the end of the day, I have always viewed it as trying to build the best platform possible for Reuben,” Williams said. “Being able to be a part of something like that, I’ve really enjoyed.”

Gardner said he believes Bynes’ perspective is one not often heard in a community like Bowling Green. He said he hopes Waco Bell’s music might lend diversity to the status quo.

“I like using music to give a platform to someone who might not be heard as much as a 20-year-old white guy with a guitar,” Gardner said. “What role do I have in that conversation besides letting somebody else talk about it?”

Despite not being the group’s principal songwriters, Gardner and Williams work to better the band in perfecting the instrumentals behind each rap and lyric. Williams said his process in helping write each song is simple.

“Send me a bare drum beat and give me two days,” Williams said. “I’ll come back with a bassline.”

As the band’s producer, Gardner feels especially responsible for ensuring each song sounds as good as possible. The group records in-house, but that’s no limitation.

Around 2012, Gardner created a personal rehearsal and studio space inside of a shack in his backyard. The space served as a horse carriage house likely around the time of the property’s construction in 1902.

Fitted with soundproofing foam throughout, dozens of cables, amps and microphones, the space is perfect for Waco Bell, which the group calls “The Beat Lab.”

As the space has been around since Gardner and Williams’ time in Sleeper Agent, Williams said he can always relax when recording inside it.

“It’s just super comfortable,” Williams said. “This is just all the privilege of comfort. However long you want to take to do it—cool. How many times you want to try it—cool.”

Gardner said the space allows him to work with each song until he believes it’s ready, which sometimes requires a song go through over 100 different mixes. Gardner said he’s willing to put so many hours into each song because of the end result.

“[It’s] obsession, really,” Gardner said. “Just wanting it to be as good as possible and the song to be represented.”

Given the thousands of dollars a group might expect to pay when recording an album at a professional studio, Bynes said he’s grateful for Gardner’s meticulousness.

“You’re paying by hour, every hour, every time they touch your song … By the sixth hour, it doesn’t matter that they’re making money,” Bynes said about recording with a professional producer. “I think it’s awesome that Scott has the time to double down and listen to something over and over again until it’s literally, like, a living, breathing thing.”

With “Black Matters” having been released over a month ago, the group is looking to continue promoting the album by playing shows and potentially looking into making a music video. The group will play around midnight at local bar Rocky’s on Friday.

Bynes said he hopes listeners may connect with “Black Matters” and any future Waco Bell project by listening to it in its entirety. He said the message is there for anyone open to receiving it.

“I feel like if you definitely listen from start to finish,” Bynes said. “You’ll hopefully get a glimpse of what we were trying to talk about.”