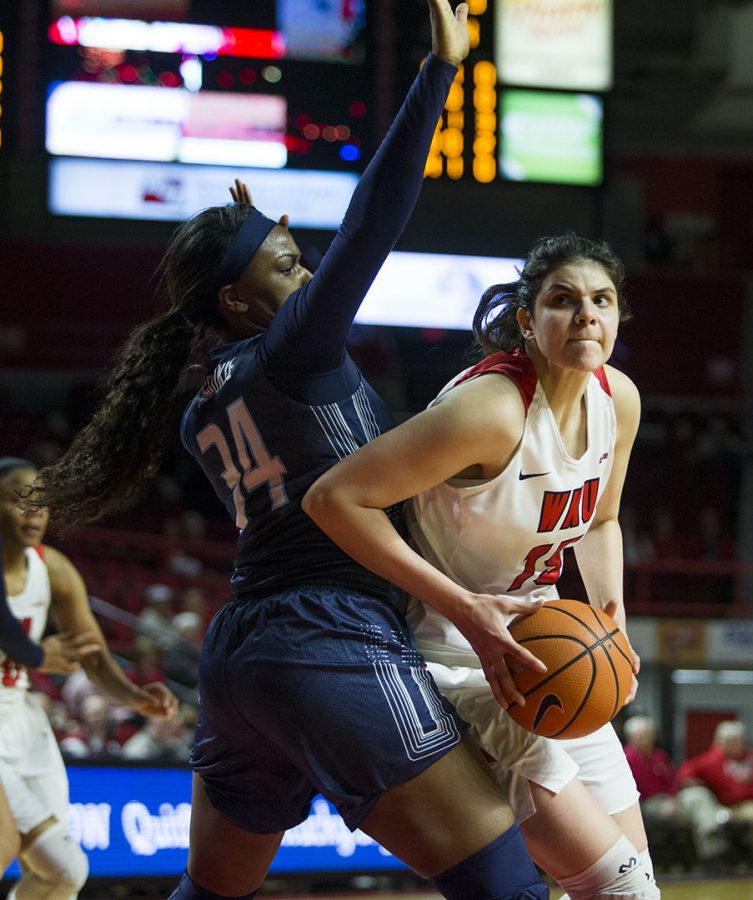 The WKU women’s basketball team was dominant down low in a defeat of Little Rock on Saturday evening.

WKU (4-6) battled the Trojans (2-5) for the entire game, withstanding multiple blows on its way to a 68-56 victory over UALR in the Jack Stephens Center.

The Lady Toppers outrebounded their opponent for the second straight contest, 38-28. WKU also found success inside, outscoring UALR 30-22 in the paint. Sophomore forward Raneem Elgedawy recorded her second double-double of the year, tallying an eye-popping 17 points and 21 rebounds.

UALR led WKU in most offensive categories, shooting 43 percent from the field compared to 37 percent for the Lady Toppers. The Trojans also shot 40 percent from deep, while WKU only shot 23 percent from beyond the arc. Junior guard Kyra Collier’s 22 points led all UALR scorers.

Despite success in other areas, the free-throw line ended up being UALR’s downfall.

WKU feasted at the charity stripe, cashing in 25-of-29 attempts (86 percent). In contrast, the Trojans converted only 8-of-12 attempts (67 percent).

As usual, the Lady Toppers were led by redshirt junior forward Dee Givens and Elgedawy. Givens shot only 5-of-16 from the field, but still managed to lead WKU in scoring with 22 points.

Redshirt junior guard Alexis Brewer also had an impactful performance in her return for the Lady Toppers. After missing WKU’s last game against Morgan State, Brewer stepped back into the starting lineup and scored 16 points.

UALR and WKU traded layups to begin the contest. The Lady Toppers and Trojans remained tied 2-2 until UALR hit a jumper to take the lead with 7:14 left to play. Senior guard Sidnee Bopp came off the bench and nailed her only 3-pointer of the contest, breaking an extended scoring drought for WKU midway through the first.

After trailing by as much as six in the first period, WKU used a 5-0 run to trim UALR’s advantage. Through 10 minutes of action, the Trojans led the Lady Toppers 15-12.

UALR pushed its lead back to five early in the second quarter. Givens quickly came to the rescue for WKU, sinking two free throws, a 3-pointer and a layup on consecutive possessions. Givens’ single-handed 7-0 run pushed the Lady Toppers in front 19-17.

From there, the Lady Toppers did not get much going offensively for the rest of the second quarter. After an Elgedawy layup at the 7:22 mark, WKU failed to convert a field goal until Elgedawy made another layup with 1:16 remaining. Six made free throws during that stretch helped the Lady Toppers weather their severe drought from the field.

The Trojans went on an 8-0 run late in the frame, taking the lead 30-27. Thanks to a 4-0 run of their own to end the first half of action, the Lady Toppers went into the locker room for halftime leading UALR 31-30.

The third period could be described in two words: scoring runs. Givens kicked off the third period with a jumper to put WKU in front 33-30. The Lady Toppers’ lead grew to as much as five points early. But the Trojans answered, forcing four WKU turnovers on their way to another 8-0 run.

UALR led the Lady Toppers 38-35 with 3:17 remaining. WKU responded with a 7-0 run, holding the Trojans scoreless for the remainder of the frame. At the end of three quarters, WKU led UALR 42-38.

The Lady Toppers picked up where they left off early in the final period, extending a scoring run that began in the third quarter to 11-0. The Trojans ended that run with a layup and later pulled back to within four points of WKU.

After Brewer sank a 3-pointer to put the Lady Toppers back in front 58-51, WKU never looked back. Brewer and Givens combined for 10 made free throws down the stretch in the fourth quarter, effectively ending any hope for the Trojans. UALR hit a few shots in the closing seconds. But it was too late, as WKU ended the game on a 13-5 run and secured its first true road win of the young season.

WKU and UALR were identical or close in numerous statistical categories, including turnovers, second-chance points, bench points and assists. But the Trojans scored more points off of turnovers, converting 13 WKU turnovers into 17 points.

The Lady Toppers spoiled UALR’s Homecoming celebration, improving to 1-6 on the season against 2018 NCAA Tournament teams. WKU has now won four of its last six contests, including two straight victories.

Following the win, WKU will head back to Bowling Green to take on Bellarmine in seven days. WKU will be well-rested as they seek to inch closer to .500 on the year against the Knights. The Lady Toppers will meet BU next Saturday at 2 p.m. in Diddle Arena.