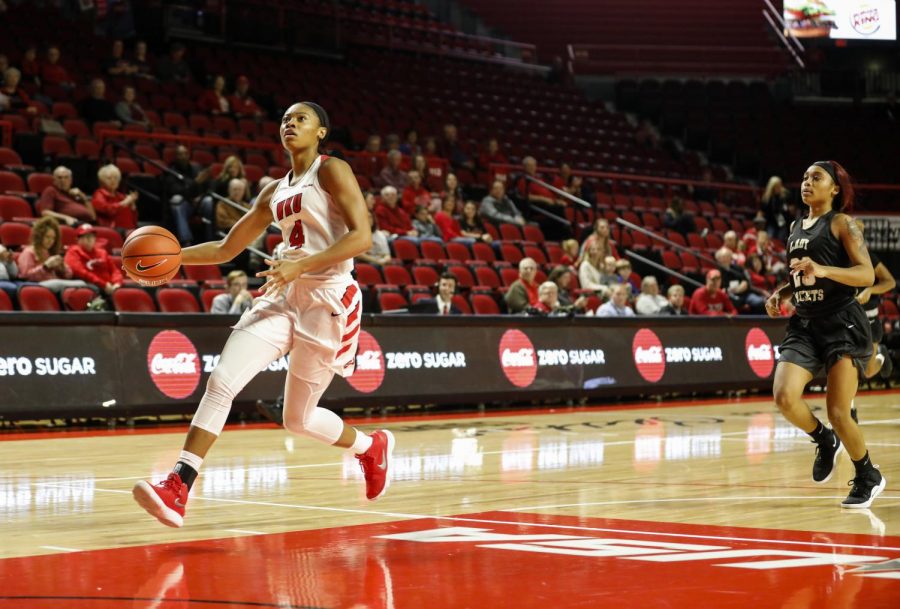 The WKU women’s basketball team came up just short against Ball State on Sunday evening, failing to climb back to .500 on the year.

The Cardinals (3-7) led for nearly 30 minutes of the game, battling their way to a hard-fought 86-83 victory over the Lady Toppers (5-7) inside Diddle Arena. WKU was out-rebounded 32-28, snapping a streak of three straight contests where the Lady Toppers were able to overcome their opponents on the glass.

WKU shot 52 percent from the floor compared to 53 percent shooting by BSU. The Cardinals shot 44 percent from deep, while the Lady Toppers converted only 24 percent of their shots from beyond the arc. The foul line proved deadly for WKU down the stretch, as BSU converted 31-of-40 attempts (78 percent) from the stripe.

“You know, we just didn’t make some shots,” head coach Greg Collins said postgame. “That really wasn’t the story of the game. Really the story was in the first half we just didn’t guard…I’m not sure that we respected their individual players, especially [Brown], as well as we should have and that showed tonight.”

For the second straight contest, the Lady Toppers were led by redshirt junior forward Dee Givens and redshirt junior guard Alexis Brewer. Brewer and Givens tied for the team-high in points with 19 each. Sophomore forward Raneem Elgedawy grabbed a team-high seven rebounds in 25 minutes of action.

BSU scored the game’s opening bucket, taking a 2-0 advantage. The Cardinals did not relinquish their advantage for the rest of the period, leading for 7:22 of clock time.

WKU was able to tie the game four times early in the contest, but also fell behind by as much as eight. The Lady Toppers were held scoreless for nearly three minutes during BSU’s 8-0 run and also committed three turnovers during that span.

After trailing 18-10, WKU answered the Cardinals’ scoring stretch with a run of its own. An and-one from redshirt sophomore Arame Niang capped off a 6-0 run to end the quarter for the Lady Toppers. WKU ended the opening period trailing 18-16.

The Lady Toppers took a 19-18 advantage early in the second quarter, but the lead was short-lived. BSU and WKU traded baskets back-and-forth until the Cardinals went on another 8-0 run to put them in front 33-25.

Givens broke an extended scoring drought for the Lady Toppers with a 3-pointer at the 3:24 mark, kicking off an 11-2 run that gave WKU a 36-35 advantage.

From there, both teams were forced to make free throws. BSU did not convert a field goal for the last 2:38 of the second period, but the Cardinals were still able to take a 38-37 lead in the locker room for halftime thanks to two missed free throws by Givens and junior guard Whitney Creech.

After beginning the game 2-of-2 from the charity stripe, Givens’ third attempt did not fall, ending her streak of consecutive made free throws at 38.

WKU opened the third quarter on a 7-0 run, which put the Lady Toppers in front 44-38. The Cardinals refused to be grounded, answering with a cumulative 13-2 run of their own which allowed BSU to take a 51-46 advantage. Niang nailed two jumpers to conclude the frame, helping the Lady Toppers claw back to tie the contest at 55.

Neither team scored until the 8:24 mark of the fourth quarter. BSU broke the scoring drought with a layup, kicking off a 9-2 run that put the Cardinals back in front 64-57 and forced WKU to call for a timeout with 6:16 left to play.

The Lady Toppers kept the Cardinals’ lead around five points for as long as they could, but a streak of nearly three minutes without a made field goal late in the contest proved costly. WKU fought until the very end, drawing to within two points with under ten seconds remaining in the game.

BSU countered by making nine foul shots in the last 1:09 of the game alone and converting seven of their last eight shots from the floor.

The Lady Toppers still had a chance to take the game into overtime on the last possession. Niang attempted a 3-pointer with seconds left on the clock, but her shot did not fall, allowing BSU to escape Bowling Green with a narrow victory over WKU.

“I mean, we were confident,” Creech said about Niang taking the last shot. “We’ve seen Arame knock down that three in practice all the time. So, you know, we were just confident in her and just telling her let it fly if she’s open.”

Niang finished the game with 13 points and five rebounds in 23 minutes.

Following the loss, the Lady Toppers will travel to South Bend, Indiana for a matchup with No. 2 Notre Dame (9-1). ND, the reigning National Champions, will be WKU’s fourth top 15 opponent so far this season.

The Lady Toppers will look to avenge last season’s 78-65 loss to the Fighting Irish on Wednesday at 6 p.m. in Purcell Pavilion.