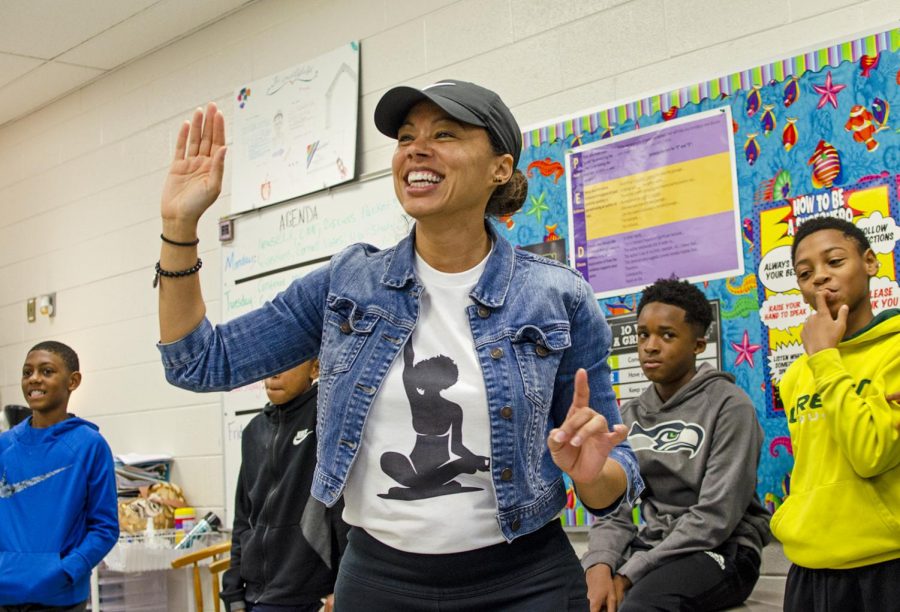 WKU's Dr. Lacretia Dye facilitates a group activity during "My Mind Matters" at Bowling Green Junior High School on Friday, Nov. 2. Dye's son inspired her to lead the mini-workshops, which she said is a spinoff to her "Black Minds Matter" discussion series. The group of African American seventh graders will meet with Dye and volunteer ISEC mentors for a class period six times throughout the semester to promote academic achievement and excellence among the students.

Through her position in the Department of Counseling and Student Affairs, Lacretia Dye works to promote health and wellness at WKU and in the Bowling Green community. From yoga to drum circles and everything in between, Dye is committed to helping those around her.

Born and raised in Peoria, Illinois, Dye has always been drawn to people. As a young girl, she always wanted to help people, and she looked up to her grandmother and other family members who were involved in their communities. She went to Bradley University for her undergraduate and master’s degrees and holds a doctorate in counselor education from Western Michigan University.

Throughout her life, she has worked as a mental health therapist, working with patients with addictions, as a school counselor as well as working with couples and families.

In 2012, after completing her doctorate, she and her family moved to Bowling Green so she could start her job at WKU. She is now an associate professor and trains students who want to pursue a career in mental health services.

Besides teaching, Dye also hosts a variety of events to promote wellness, including drum circles as an alternative to drinking alcohol. Using African drums, Dye encourages participants to release undesired emotions or tension from the week. She teaches yoga at the Preston Center with the same intentions.

“To me that’s just like giving life to these babies—I call the students babies,” Dye said. “These young people, giving life to them and letting them learn how to destress, self-regulate and manage self through a different way.”

With her husband, Dye hosts community meals on Sundays and invites domestic and international WKU students to their house.

“We’ve had students from all over the world in our house,” Dye said. “One time, I remember we had a representation of at least nine different countries.”

Dye also invited people to her house to celebrate Thanksgiving.

“We say it to everybody,” Dye said. “If you know somebody who’s not going anywhere, come over here. It’ll just be our family and anybody that wants to show up.”

Dye said she often ends up becoming a mentor to many students and people who come in contact with her. She and her husband have turned into mentors for young couples that they have met through her various events. Currently, they’re mentoring four different couples.

Peter Fleming was inspired to pursue a graduate degree in Clinical Mental Health Counseling at WKU after having Dye as a teacher.

“She exuded so much passion and fulfillment in her teaching,” Fleming said in an email. “She channels her energy into helping those around her such as her students, clients and most everyone that she comes into contact with.”

Fleming said Dye is one of the greatest teachers and individuals he has ever come in contact with.

WKU alumna Chanel Watkins met Dye at a multicultural retreat through WKU, where Dye was a guest speaker. Watkins said the impact Dye had on her was immediate, and they have been connected ever since. Dye will always go the extra mile and put in the work needed to get the results she wants, Watkins said.

“She does an excellent job with being relatable and getting the students to open up,” Watkins said in an email. “She’s a mentor to the lost, and a motivator to the encouraged. She’s all-around greatness.”

Outside of WKU, Dye is involved with the Bowling Green community by donating shoes to local international communities. She also goes to a local junior high and presents a workshop based off of the Black Minds Matter lecture series she hosts at WKU. Along with volunteers from the community, Dye said she gets children involved in activities and talks about self-development and self-growth.

“I’m right here in this community, and there’s a need, so I’m going to act,” Dye said. “As long as we’re seeing needs, and if we find out that there truly is a need, why not act on it?”

Her genuine love for life and for people inspires her to impact the community. Dye said she wants to participate in life fully and in a way that is healthy for her and for those around her.

“I just think about how precious life is,” Dye said. “I really, really have to be intentional about making a way to show up and do what I love every day.”