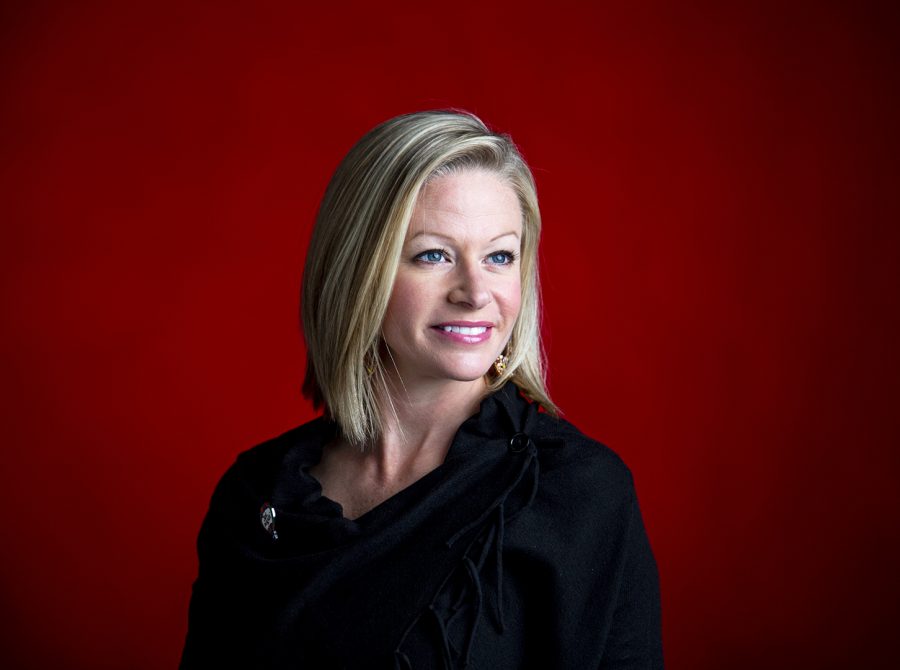 Dana Matukas, a WKU Alumni, has for the past 5 years been the development and marketing coordinator for the Norton Children's Hospital and the coordinator for Dance Big Red which happens every March in Preston. “I get emotional when I think of the children I work with. Many have been in and out of the hospital most of their lives. You learn to not take life for granted when you work with these children and see what their families go through,” Matukas said.

At 6:15 p.m. on a rainy early-November evening, Dana Matukas, 41, of Bowling Green had just walked into Downing Student Union. Dressed in a black pullover bearing “Norton’s Children’s Hospital” and “Dance Big Red” insignia paired with matching black pants, she was accompanied by her son Ryan, 9, and daughter, Cooper, 7. Her husband and oldest son, Jax, a 12-year-old, were busy at a game.

With Ryan and Cooper preoccupied by a pair of iPads, Matukas prepared for a 7 p.m. student-run Dance Big Red Executive Board meeting. Her medium-length blonde hair tied back, Matukas spoke with a board member before the meeting near the building’s third floor elevators.

Dance Big Red is WKU’s annual 12-hour dance fundraiser for Norton Children’s Hospital. As the hospital’s first-ever development and marketing coordinator for the western Kentucky region, a position she’s held for the past five years, Matukas saw the event as a prime opportunity to give back to the more than 8,000 kids treated by Norton’s within the region, which includes Bowling Green, Owensboro, Elizabethtown, Paducah and Glasgow.

Throughout the meeting, which featured around 15 board members, Matukas sat in a front seat to the very left of the room, only diverting her attention from the board members’ discussion periodically to the back of the room to remind her kids to remain quiet.

She took notes throughout the meeting and spoke sparingly. When she did speak, it was to remind each board member to sign a card she was planning to send to an anonymous Dance Big Red donor with cancer. She also told the members she would provide food during an all-day event specifically for contacting donors.

While listening to board members’ fundraising proposals and other planned events, Matukas served as a point of reference regarding logistics and overall organization, offering advice when needed and enthusiasm too.

As the meeting ended and a number of members left the room, Matukas stayed around to answer any pressing questions and to make sure everyone signed the anonymous donor’s card.

It was already 8 p.m. on a Monday night, but Matukas was in no rush. Dance Big Red was still over four months away.

Over a year earlier in February 2017, Amanda Miller, 34, a teacher’s aide at Jennings Creek Elementary School and mother of two boys, had just spent 28 hours in labor at The Medical Center in Bowling Green. Finally, she was ready to meet her new baby girl, Abigail.

Miller was excited to spend the next few days getting to know Abigail and recovering from the past eight and a half months of pregnancy. Abigail, her first daughter, was born almost right on schedule.

Just moments after a nurse brought Abigail to her mother, still struggling to manage her own breath, Miller noticed Abigail wasn’t breathing properly. Instead, she sounded like she was growling, and her skin wasn’t pink like her brothers’ had been. She was gray.

Miller held her daughter for barely a minute before the nurse whisked her away again to determine what was wrong. Miller assumed the complications were merely a side effect of the especially long time she spent in labor. Nothing to worry about.

An hour passed. Then another. And another after that. Still no word.

Each time Miller and her husband asked a nurse if their daughter was OK, they were told she was still under examination, though nothing had been concluded. Five hours passed before they discovered Abigail was in need of immediate attention, as her current condition was “not compatible with life.”

She was born with a large hole in her heart as well as a congenital heart condition known as dextro-transposition of the great arteries, which means the main arteries carrying blood away from her heart were reversed. Though each of Miller’s four ultrasounds throughout her pregnancy with Abigail proved successful and showed no signs of irregularity, doctors concluded the condition developed when Abigail was only 8 weeks old. According to the American Academy of Pediatrics, one in 110 babies in the United States are born with a heart defect.

“It was very scary to be told there was something wrong with your child,” Miller said.

The family was informed Norton’s transport team was already on a flight to Bowling Green to recover the girl and bring her to Norton in Louisville, where a medical team would attempt to keep her alive through the night.

Miller’s husband flew with Abigail and the transport team to Louisville, but Miller had given birth only hours earlier and wasn’t cleared to fly. Though new mothers are traditionally kept in the hospital close to 48 hours after giving birth, Miller stayed only 12. She needed to be with her family, the majority of which traveled to Louisville immediately after hearing the news about Abigail.

“I told the doctor, ‘You’re either going to release me, or I’m walking out,’” Miller said.

At only 3 days old, Abigail underwent life-saving open heart surgery. She and Miller spent the next 18 days at Norton while Miller’s husband stayed in Bowling Green with their sons. There was still school to attend.

Miller said the transition from Norton’s to home was tough. Due to Abigail’s surgery, Miller and her husband weren’t allowed to lift their daughter from under her arms for six weeks, and Miller was now primarily responsible for keeping track of Abigail at all times. Though she intended to return to work six weeks after giving birth, she was forced to quit her job on account of the demanding nature of Abigail’s needs.

“It was a tense time,” Miller said. “I just full-time went back to work six months ago.”

Before leaving Norton, a nurse told Miller about a support group that existed for parents of children with heart conditions. The nurse then handed Miller a stack of business cards, saying, “You’re gonna realize you need someone to talk to.”

A few weeks later, Miller got a call from Matukas, who invited Miller and her family to a meeting of the Western Kentucky Brave Hearts Chapter, a support group for families affected by congenital heart defects that required surgery within the western Kentucky region.

Miller said she and her family were “OK” and fine on their own.

Matukas called another time, but Miller wouldn’t budge, insistent that she and her family didn’t need help.

Without anyone to turn to for advice when things got especially difficult with Abigail, and with a husband and two boys to keep in mind, Miller realized, “Maybe I do need to talk to someone else who’s been in this position.”

Since then, Miller and her family have come to know Matukas well.

“She’s not just the lady from Norton’s,” Miller said. “She’s a friend of ours.”

Miller said she’s amazed by the level of commitment Matukas shows to every Brave Hearts family, given Matukas has three kids of her own. Despite being the one to organize and moderate every meeting of the Western Kentucky Brave Hearts, when speaking with Matukas, “it’s like she has nothing else going on,” Miller said.

“She puts her Brave Hearts families on the same pedestal as she does her kids,” Miller said. “They’re of the utmost importance to her.”

After graduating from WKU in 2001 with a degree in marketing, Matukas took a job with the Bowling Green Area Chamber of Commerce.

A few years later, Matukas and her family moved to California, where her husband, Steve, 42, was from, so she and her husband could pursue careers in online real estate. Though the work provided her family a stable life in sun-soaked California, something was missing.

Matukas said she felt unfulfilled and didn’t see a future for her family in the area, so she started to look for work back in Kentucky. Soon after, she found an opportunity with Norton she couldn’t pass up.

“I think it was all part of God’s plan to get me back here,” Matukas said. “It’s been the best thing.”

Through her work with Norton, Matukas helped establish the Western Kentucky region’s Brave Hearts group four years ago, which typically meets every other month at locations around the Bowling Green area.

Matukas said the kids inspire her to ensure no child in need is ever left untreated. She said the Brave Hearts families she looks after have come to feel like her own family.

“You want to see them healthy and feeling good,” Matukas said. “I love what I do.”

Alongside then-sophomore Kelli Robinson, 24, of Bardstown, Matukas helped found Dance Big Red, which has raised over $150,000 for kids affected by heart conditions and adolescent cancer within the region since first appearing on WKU’s campus in 2014.

Robinson, now a registered behavior technician at the Bluegrass Center for Autism in Bardstown, said Matukas was the first person to support her desire to establish a dance fundraiser at WKU. She said it was Matukas’ idea to center the fundraiser around heart-related issues.

“She’s just a genuine person,” Robinson said. “She really wanted to be a part of our lives.”

Molly Ann Daniels, 23, was a 2017 Dance Big Red Co-chair. She said she experienced her own open heart surgery at age 6. She described Matukas as a great role model.

“If you’re ever around Dana, you try to channel Dana,” Daniel said, referencing a spinoff to a popular catchphrase she coined in honor of Matukas: “What would Dana do?”

During a recent lunch with Matukas, Daniel was surprised to discover Matukas had already participated in a radio interview and morning meeting before arriving to eat. After lunch, Matukas would be traveling to Owensboro for an all-day event and would later help construct a Dance Big Red Homecoming float for the upcoming parade. Above all, she had a family to go home to.

“Dana just does so, so much,” Daniel said. “Truly, I don’t think people understand just how much she does.”