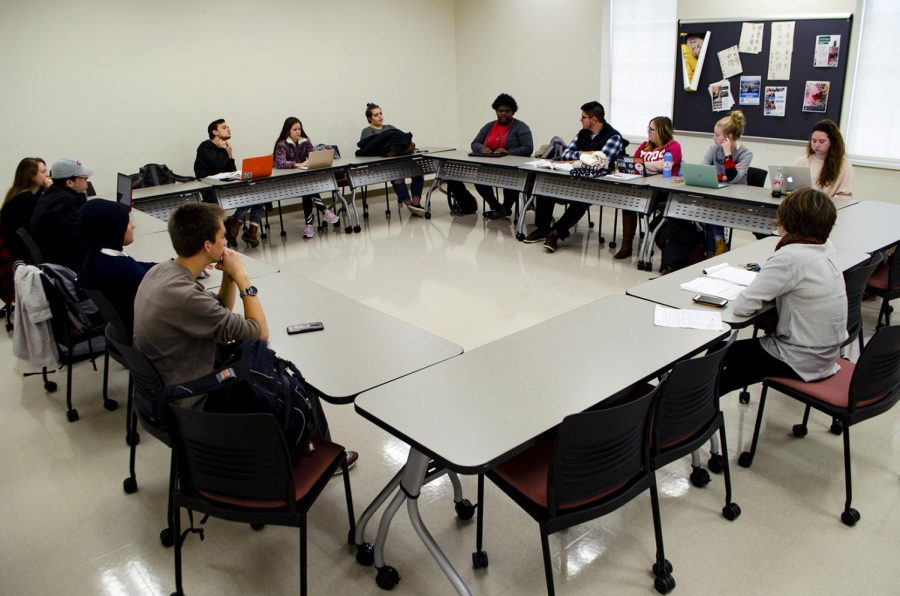 Freshman Manzar Rzayeva moved to Bowling Green from Azerbaijan in July 2015 and began her time at Greenwood High School as a junior. Despite earning a 4.0 GPA in high school, she said she had difficulties with English as her second language.

WKU was a close-to-home option for college, and Rzayeva said the University’s Mahurin Honors College was also appealing. However, she said she was initially uncertain about applying because of her struggles in high school with English during standardized testing.

“I knew I wanted to be a part of the Honors College, but I almost did not apply because I was so scared that I would not get in,” Rzayeva said. “I talked to a few of my friends from my high school who were applying, and I finally thought, ‘You know what, let’s give it a try.’”

Rzayeva applied and got accepted to the Honors College as a freshman.

Since its start in 2004, Honors College admission included minimum application requirements, including at least a 27 ACT composite score, a 3.8 unweighted GPA or placement in at least the top 15 percent in the student’s high school class.

Beginning this semester, WKU’s Honors College removed its minimum academic requirements in a new measure to improve its diversity enrollment. Interested students still must fill out an application, which includes essay questions.

As Honors College student enrollment increased from 2015 to 2018, the number of underrepresented minority students, including black and Hispanic students, remained stagnant.

The number of enrolled first-time freshmen who identified as “underrepresented minority students” was 22 in 2015, 18 in 2016, 25 in 2017 and 18 in 2018. First-time freshmen are the largest population of students who join the Honors College.

Allison Campbell, assistant director of admissions and external relations for the Honors College, said it was common for honors programs around the country to have similar parameters. She said the requirements could be considered benchmarks for where students would most likely be at when they applied, and the Honors College was always flexible for any student who did not meet those requirements.

Campbell said the academic requirements could have stopped underrepresented minority students from applying and enrolling into the Honors College at WKU.

In 2017, the average ACT composite score for black students who were in schools that focused on core curriculum, including English, math, reading and science, was 17.7. The average score for Hispanic students who attended core-curriculum schools was 19.8.

Those scores were less than the average composite score for white students who attended core-curriculum schools, which was 21.7, according to the ACT Profile Report for Kentucky.

Maysville freshman Brisean Corde was an honors student at Mason County High School before he chose to attend WKU, receiving a 3.8 unweighted high school GPA and a 23 ACT composite score. He wanted to apply to the Honors College because of the advanced placement classes in high school.

In the two honors classes he took this semester, Corde, an African-American student, said he was one of only two or three minority students in the class. He said one of the reasons fewer underrepresented minority students apply and enroll in the Honors College could be the lack of AP courses available at high schools where the students attend.

“A lot of high schools don’t set the minority students up for taking AP classes,” Corde said. “I feel like I could have taken them sooner if they had been available to me. I don’t feel like it’s an Honors College problem. I think it has to do with the high schools.”

Martha Sales, executive director of WKU TRIO Programs and WKU’s Intercultural Student Engagement Center, said the smaller number of enrolling minority students in the Honors College could have been due to an overall lack of resources for the students as they entered college or if they came from low-income families.

Sales said low-income students and minority students could have come from high schools where rigorous academic courses were not offered or where they had outdated textbooks. However, she said she didn’t want to overgeneralize all minority students, and she said there wasn’t a single reason for the stagnant number of minority students in the program.

Sales said the academic requirements the Honors College had in place could have dissuaded minority students from applying and enrolling in the program.

“It’s all about perception,” Sales said. “It could be the perception that they’re not welcomed. Anyone can invite me into their home, but it’s about, ‘Do you make me feel welcome in your home?’”

Although Rzayeva said there were many reasons for why minority students were not applying for or enrolling into the Honors College, she emphasized the importance of improving diversity.

“My opinion is that differences are what bring us together,” Rzayeva said. “People from opposite cultures and opposite beliefs, they are the ones that build stronger foundations for either a country, a community, a school or a university.”

Reporter Nicole Ziege can be reached at 270-745-6011 and [email protected] Follow Nicole Ziege on Twitter at @NicoleZiege.