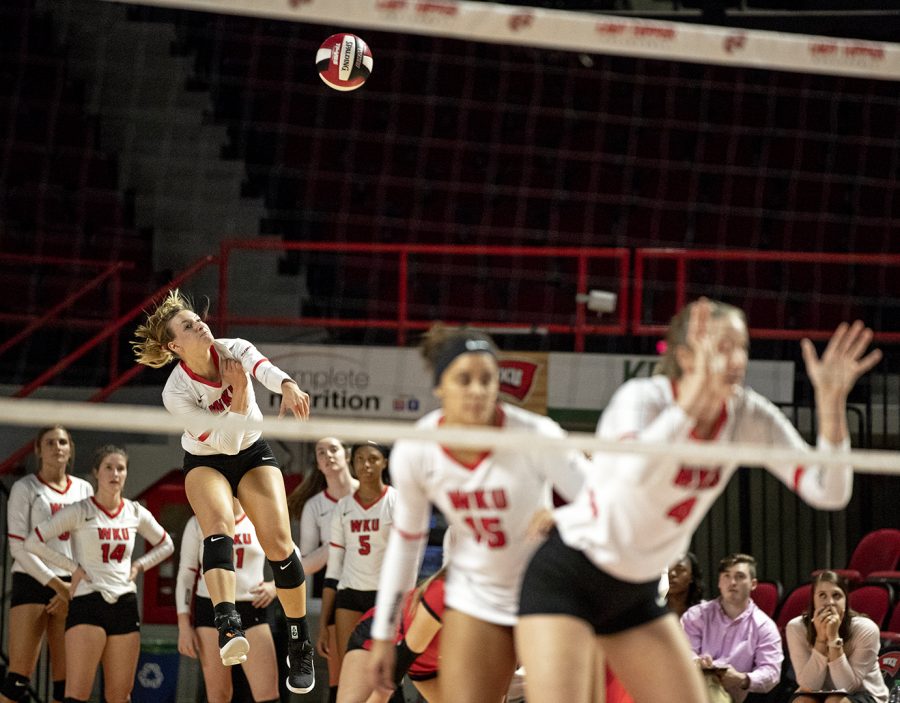 WKU's Sophia Cerino (23) serves the ball during a home game against North Texas on Friday, Oct. 19, 2018. This match was the Lady Toppers' third straight lost.

WKU wrapped up its home schedule with a win on senior day, defeating Florida Atlantic 3-1 for the team’s fourth straight victory.

The Lady Toppers finished the season in Diddle Arena with a 11-4 record and moved to 18-9 overall. WKU remains in a three-way tie for third place in Conference USA.

In the last home match of her career, senior Rachel Anderson was able to seal the victory for the team with a service ace to close the final set.

“What a script—the kid is an All-American, in her last match on Diddle Arena court, on senior day and she serves as an ace to win it,” head coach Travis Hudson said. “You can’t draw it up any better than that. It felt like that ball hung up in the air forever, but when it fell, it was a really cool moment.”

Anderson finished the match with 15 kills and seven blocks. Senior Mary Martin facilitated the offense for the Lady Toppers, picking up her second career double-double with 47 assists and 11 digs.

Junior Sophia Cerino led the team in kills in the match, finishing with 16 and adding a career-high six aces and three digs. The Lady Toppers finished with a season best 13 aces.

Hudson said the team played at a championship level in its match Sunday.

“We’ve been fighting for that all year,” Hudson said. “A little bit of confidence is starting to creep in with these kids down the stretch; we played at a really high level. Florida Atlantic is a fantastic team, and we knew we had to play well to be in.”

Looking back after her final home match, Anderson said the thing she’ll miss most about Diddle is the fans.

“Our community is amazing—the love and support and encouragement we get from all of them—and I can’t explain it. It’s great,” Anderson said. “I’m happy our season isn’t over, and it hasn’t really hit me yet, but it was a great turnout, and it was just a great day for us.”

Anderson and Cerino again led the way for the Lady Toppers offensively, combining for 35 of the team’s 61 kills. Anderson led the way with 18 while Cerino added 17. Sophomore Kayland Jackson and freshman Lauren Matthews each finished with nine kills.

The team recorded a season-high 16 blocks. Anderson led the team with eight while Cerino and freshman Katie Isenbarger each had six. Defensively, freshman Payton Frederick recorded a career-best 23 digs in the match.

Redshirt freshman Taylor Bebout facilitated the offense in the match, recording her sixth double-double this season with 50 assists and 15 digs.

Only a pair of road matches remain on the schedule for the Lady Toppers this season before the C-USA Tournament. WKU will visit UAB on Thursday as the Blazers celebrate their senior day before the season concludes with a matchup against Louisiana Tech in Ruston, Louisiana.