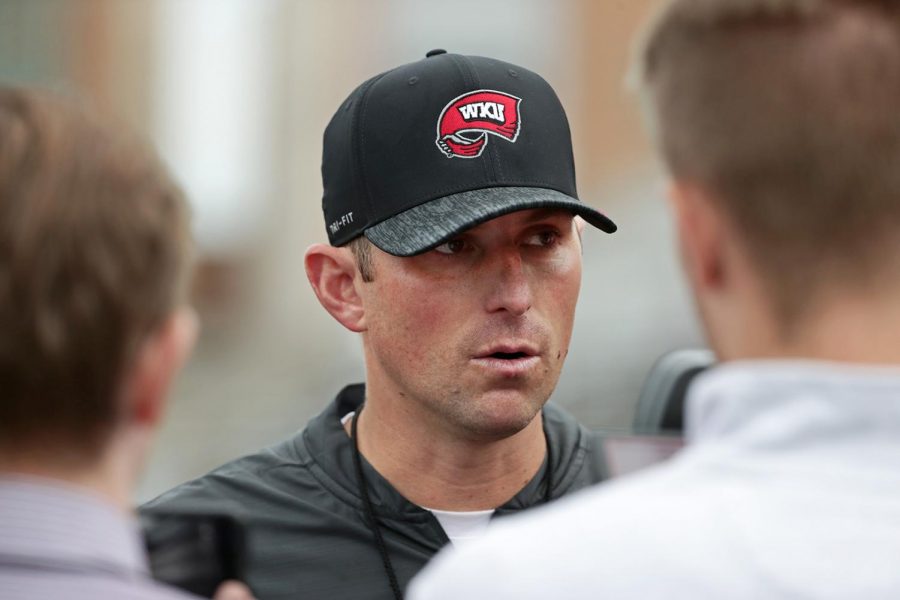 It’s really not surprising we’re at this point.

Most WKU fans saw it coming last year, not hesitating to pour criticism on now-former WKU head coach Mike Sanford after the Hilltoppers lost three straight to Florida Atlantic, Vanderbilt and Marshall last year. That criticism certainly didn’t let up when WKU got annihilated by Florida International 41-17 to close the season. Nor did it let up when the Hilltoppers lost to Georgia State 27-17 in the Cure Bowl, falling to a Panthers team that was playing in only its second bowl game in the program’s history.

“I felt like Georgia State honestly wanted the game more than we did,” athletic director Todd Stewart said. “And that was disappointing because we had a lot at stake. We’d won a bowl game three straight years. There were only nine programs in the country that had done that, and that was a historical game, so to come out and play like that was disappointing.”

The Hilltoppers struggled in almost every facet of the game in 2017. Most notably, they averaged just 61 rushing yards per game and recorded only 12 sacks all year.

Still, 6-7 got the job done in year one. College coaches generally get four years to implement their own system, and after year one it seemed like Sanford would get that.

But in Sanford’s second year—his first without star quarterback Mike White to aid the offense—the Hilltopper program regressed more severely than anyone could have expected.

It didn’t seem like it could get much worse when WKU lost to Maine, a Football Championship Subdivision opponent. The Hilltoppers only managed to beat Ball State in their first 10 games. The 1-9 start included a blowout loss to Charlotte, a school that was founded in 2013.

While it wasn’t known at the time, there wasn’t anything Sanford could do to help himself after the 1-9 start. The Hilltoppers won their last two games, including a win over a bowl-eligible Louisiana Tech team, but Stewart still pulled the plug.

“The thing that I point out is the evaluation on the overall body of work. And the two years that Mike was our head coach, the winning percentage over those two years is the worst by any Western Kentucky head coach since 1922,” Stewart said. “You look at where we have been as a program and where we are now—we need to get back to where we were.”

As troubling as 2017 was in certain statistical aspects, 2018 was worse in others. Most notably, the Hilltoppers were atrocious in converting third and fourth downs. WKU converted just 72-of-185 third downs, which was just 39 percent. The Hilltoppers struggled mightily on fourth down converting, just 9-of-24 attempts (38 percent), and yet they continued to attempt fourth-down conversions for much of the year.

During Sanford’s tenure, WKU saw a number of departures from the football program between 2017 and 2018 for a variety of reasons. Punter Jake Collins transferred to Northwestern, running back Quinton Baker was removed from the team and announced he would transfer as well. Running back Marquez Trigg left the team as well during the 2018 season, and Xavier Lane was temporarily removed from the roster.

While Sanford seemed like an exciting young hire at the time, he’s left this program in far worse shape than it was when he got here. Thankfully for the next incoming head coach, they’ve got the best recruiting class in WKU history to build on.