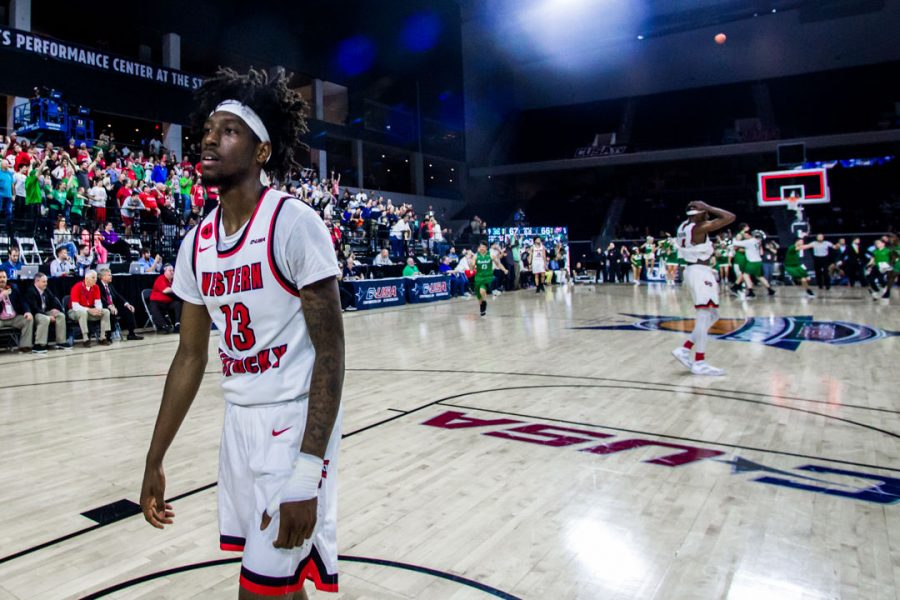 WKU Guard Taveion Hollingsworth (13) walks away following the Hilltoppers 67-66 loss in the championship game of the Conference USA tournament against Marshall University on Saturday March 10, 2018 at The Star in Frisco, Tx.

Hollingsworth was suspended for WKU’s exhibition against Campbellsville Tuesday for what the program said was a “violation of team rules,” but the team did not disclose what that violation was at the time.

“Taveion is a guy that I least expect to do anything not right,” head coach Rick Stansbury said after WKU’s 91-66 win over Campbellsville. “So, you know, basically it was a decision we find out about [Tuesday] and have to handle it … He’s got to learn from that situation, he’s got to grow from it, accept his responsibility and his accountability of it and get better from it.”

Hollingsworth was given the citation at 8:40 p.m. at the Kentucky Street Apartments Monday.

Hollingsworth scored 506 points last season, a new freshman record for WKU. That made him the team’s leading returning scorer. He also started in all 38 games in his first year.

Hollingsworth’s suspension was one game, according to the program, so he’ll be back in action when the Hilltoppers play their final exhibition against Kentucky Wesleyan at 2 p.m. on Saturday in Diddle Arena.