Fresh worker brings positivity to students to brighten their day 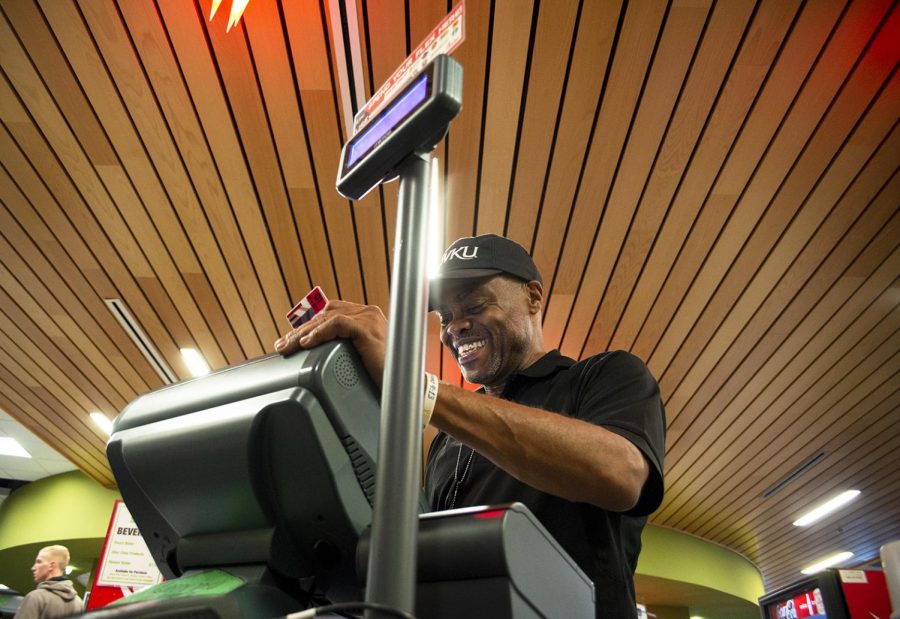 Almost every day, Tony Page stands at the front counter of the Fresh Food Company ready to greet and welcome the hungry students of WKU.

“I love people. I love everybody, man,” Page said. “Everybody has a heart, and everybody has good in them. Sometimes you give love, and sometimes you just have to let them bring it to you.”

Page was released from the Army after six years because both of his wrists were cracked after falling off a military tank.

Page has been working for Aramark, a food service provider that hosts WKU restaurants, since last June and previously worked as a cashier at Chick-fil-a and a cook at Fresh. Page now currently works as a cashier at Fresh four hours a day.

Page worked in communication careers in the past. He worked as a condo salesmen, U.S. Army soldier, a public speaker, customer service associate and as a sports coach for middle schools. Page said these careers taught him to be able to read people and their body language.

Page said he uses this to help those who might be having a bad day or might need some help. People will always remember moments of kindness, Page said, and he believes that those who receive kindness will also give it, especially at work.

“Whatever is going on in life, you leave it at the front door when you go to work,” Page said. “I’m only here four hours a day. If I can’t make someone laugh or someone feel good, then I don’t need to be there.”

Page said he always takes extra time to talk to others and give them a sense of place.

“Everybody’s human,” Page said. “Everybody has feelings. Everybody has good in them. Just because somebody looks a certain way, you don’t judge that. You find out what’s on the inside.”

While working at Fresh, whenever he has a feeling a student is stressed, Page said he tries to remind them the next day will always be better.

“I treat everyone how I want to be treated—like family members,” Page said. “I always try to treat people with respect because that’s just how I was raised.”

Dave Fenwick, a supervisor at Fresh, often works with Page at the front counter when large crowds of students come through the doors. Page has been working with Fenwick for about a month.

“People enjoy being around him,” Fenwick said. “Seems to genuinely care about the customers.”

“I hadn’t seen him for 30-something years,” Hampton said. “We used to go to parties and play football together.”

Hampton described Page as an overall good guy. He said they still joke around like they did in the 80s. Hampton said after high school, he joined the Marines while Page joined the Army.

When Page worked as a football coach, he wanted to help children build confidence in themselves. Page said he didn’t like dealing with coaches who were often verbally harsh on kids whenever they messed up.

“When people are upset, you have to let them know—it’s OK, things happen,” Page said. “Nobody perfect, but once you get it in your head that you’re going to drop the next one, you will. I believe in building a kid’s confidence.”

Page emphasized the importance of making a good first impression wherever you go, because you never know who’s watching. By being kind and generous to total strangers, one can generate opportunity by impressing the right people, he said.