Hilltoppers get first win of season over UT Martin 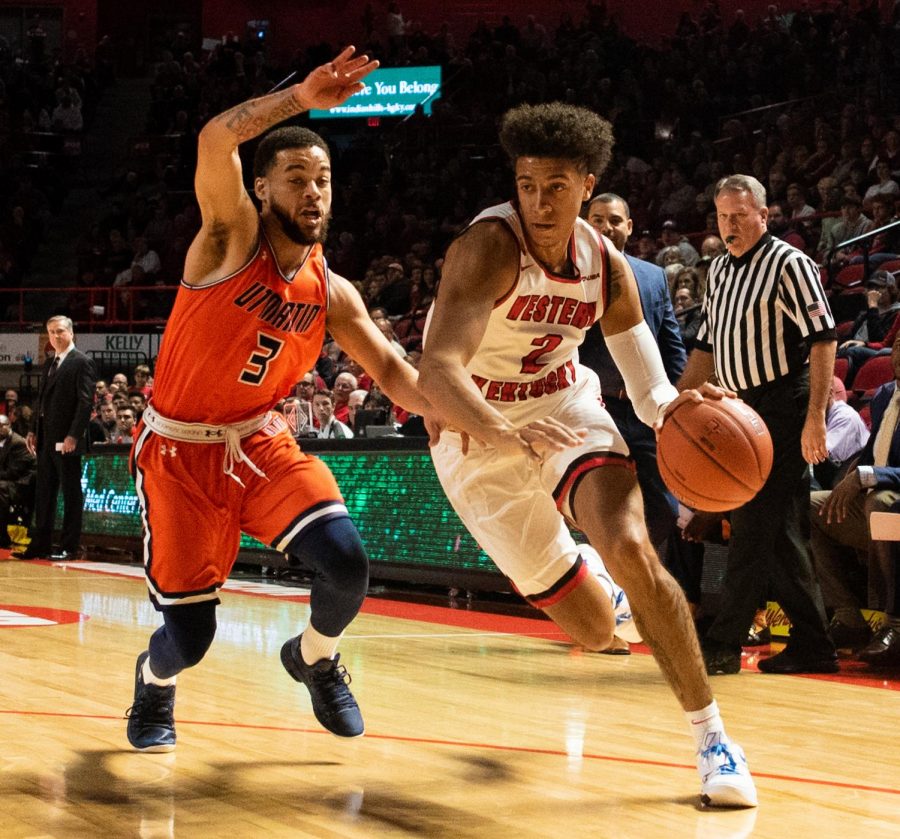 Finally at full strength, the WKU men’s basketball defeated UT Martin 86-71 to improve to 1-1 on the season.

Graduate transfer Desean Murray made his season debut on Saturday night after serving a one-game suspension for marijuana possession.

With all the pieces back in action, head coach Rick Stansbury looks for this team to start gelling as a collective.

“I think that’s the next step for this team,” Stansbury said. “We’ve got to get some rhythm and some chemistry. Guys playing together and figuring out that rotation off the bench.”

“It was amazing to be able to join my team,” Murray said. “Just to be a part of the action on the court, it was just great to be out there.”

With Murray back in the fold, Hollingsworth expects the Hilltoppers to make leaps as a team.

“We expect more now,” Hollingsworth said. “Now we’ve got to get comfortable with each other and start coming back as a puzzle.”

The Hilltoppers and Skyhawks traded buckets early on, with sophomore guard Parrish Hewitt and junior guard Derek Hawthorne Jr. each hitting a 3-pointer for UTM.

Graduate transfer Desean Murray checked in for the first time all season at the 14-minute mark.

Taveion Hollingsworth was the main source of offense early on with 10 points. The Skyhawks led 26-22 after the second media timeout on the back of 11 points from Little.

Buckets from Hollingsworth and Murray tied the game. Back-to-back paint scores, including an emphatic dunk from Tolu Smith, put the Hilltoppers back on top and forced a Skyhawk timeout.

UTM started off the half hot, making its first three field goals. WKU maintained a 54-45 lead going into the first media timeout.

A 7-0 run by the Hilltoppers helped open up a 14-point lead. Desean Murray made a couple tough shots down low and Hollingsworth scored on off of a steal. WKU was able to extend the lead to 16 thanks to a flurry of Skyhawk turnovers.

Buckets from Bassey and Murray out of the timeout put the Hilltoppers comfortably ahead 80-65.

Hollingsworth drained a 3-pointer with a little over two minutes to put to bed any comeback attempt from UTM.

This was WKU’s first win of the season. The Hilltoppers will take on Valparaiso in the first round of the Myrtle Beach Invitational at 4 p.m. Thursday. The game will be available on ESPNU.