Local deli invites hungry patrons to ‘Come on in y’all!’ 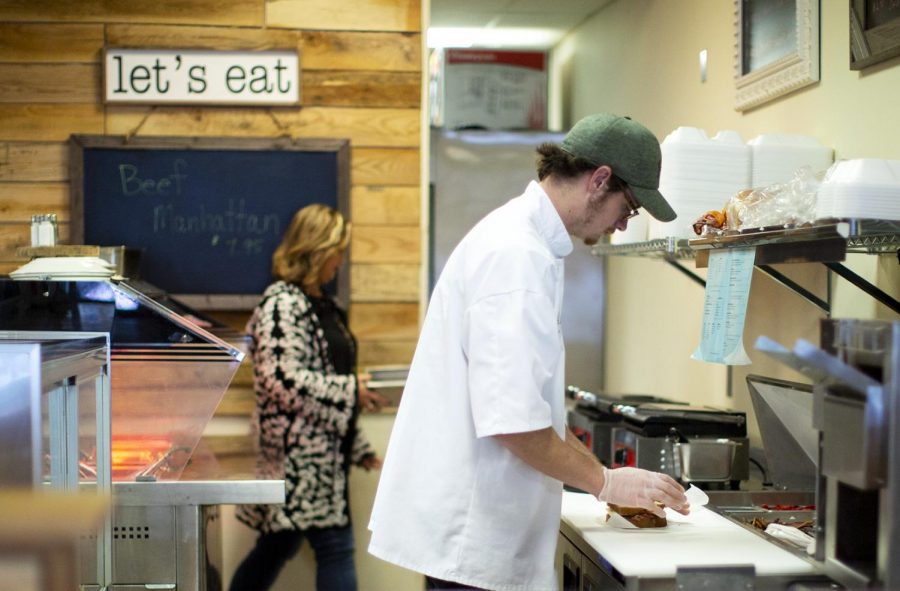 With a name like Southern Legends, home-cooked, freshly baked and made-like-your-grandma’s comfort food is a given. Since its grand opening on Oct. 29, Southern Legends Deli & Bakery & Catering has served up everything from hot ham and cheese paninis to banana nut muffins and more in the heart of downtown Bowling Green.

The moment Elkton native and Southern Legends owner Drew Farlow laid eyes on the building now home to Southern Legends, which operated as a Subway restaurant until spring 2018, he said he knew it would be a prime spot for hungry students and businesspeople. With the help of his family, Farlow bought the location and refurbished its interior during the summer. Farlow said he and his father styled the restaurant to feel like home.

“Whenever you come in the restaurant, that’s all work that we put in to make the place feel like it does,” Farlow said.

From the “Come On In Yall!” sign stationed right outside the front door to the family photos of various Southern Legends staff members hanging along the restaurant’s walls, Southern Legends does its best to make its patrons feel like family. Farlow said he makes an effort to greet and get to know everyone who walks through the door.

“My number one is customer service,” Farlow said.

Southern Legends aims to do this by updating its menu regularly, serving up different homemade offerings on a weekly basis. However, one thing’s for certain—whether it’s beef goulash or ham and white bean soup, it’s made with local ingredients and in-house every day.

“Whatever we make, it’s from scratch,” Farlow said. “Homemade cooking’s our passion.”

In support of other local businesses, Farlow said Southern Legends is committed to buying local produce and farm-raised meat whenever possible.

“If I can keep it as local as possible, I try to do it,” Farlow said. “I want to help people out.”

Above all, Farlow said he hopes Southern Legends might serve as a home away from home for everyone in need of a home-cooked meal. He said making first-time customers into regulars is one of his top priorities.

“They’re coming in to eat, and we’re the ones to feed them,” Farlow said. “That’s our primary target—to keep people coming back.”

Farlow said he got into the food industry during culinary school while operating a small catering business alongside his friend, classmate and current Southern Legends managing partner Tina Barron. Barron, a Glasgow native, said she and Farlow decided to start their own business during one specific catering opportunity.

“We were doing a catering event, and actually, I looked at him and I said, ‘We need to expand this. We need to do a little more,’” Barron said. “He looked at me, and he was like, ‘I have an idea.’”

Despite working as a cosmetologist in her previous career, Barron said the restaurant business has always been a dream of hers. After battling and overcoming thyroid cancer around the mid-2000s, Barron said she was determined to start fresh.

“My whole life, I have cooked for my family, for my friends,” Barron said. “That’s always been a passion that I’ve had. The Lord gave me a second chance at life, so why not follow my passion?”

Barron made her dream possible by attending culinary school at 48 years old, graduating at 50. Barron said she never saw her age as an obstacle.

“It’s never too late to achieve your dreams, so, you know, that’s what I did,” Barron said.

Though Barron and Farlow both live outside of Bowling Green, she said they believe Bowling Green is perfect for the kind of food Southern Legends has to offer.

“If you look around, there’s really not a place where the lawyers and the small businesses on the square to actually go for a hot lunch,” Barron said. “I was like, ‘This might be the ticket, here, to provide for the community.’”

The community seems to approve. Southern Legends has maintained stable business since its grand opening, Barron said, especially during lunchtime.

Dan Harbison, a Bowling Green resident, is the president and CEO of Farmers National Bank. During his first visit to the restaurant around lunchtime, Harbison tried soup, a dish he said he loves during the fall and winter.

“I’ll take that every day over a chain on Scottsville Road,” Harbison said.

Colin Ritchie, a Bowling Green resident and regular patron, said he attended culinary school with Farlow and Barron. He said he enjoys going to Southern Legends because of its cute atmosphere and downtown location.

Given his preexisting relationship with the owners, Ritchie said he knows the restaurant will always be clean and the food good.

Along with Southern Legends’ $10 hot-plate lunches every Wednesday, Thursday and Friday, which feature a meat, two vegetables and a cornbread muffin or yeast roll, Barron said she hopes customers know Southern Legends serves breakfast every day from 7-10 a.m. Daily offerings include biscuits and gravy, scrambled eggs and breakfast meats like bacon and sausage.

The restaurant is open Monday to Friday from 7 a.m. to 3 p.m. and caters during the weekend and certain weekday evenings. Barron said catering occasions can be arranged by contacting Southern Legends in store or by phone.

For anyone in search of southern comfort and friendly faces, especially WKU students stuck on campus and gearing up for the semester’s end, Barron said Southern Legends is here to stay.

“We’re right here for the Western students that can’t get home or aren’t able to cook for themselves and want a home-cooked meal,” Barron said. “We’re right here. Come see us.”