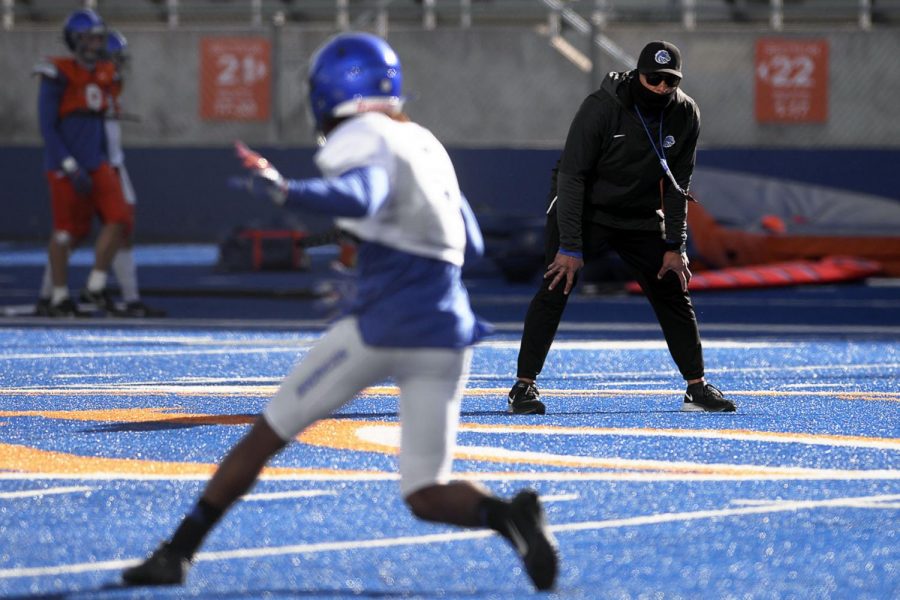 A short time later, reporters were allowed to come inside Albertsons Stadium and watch roughly 45 minutes of practice.

Both didn’t happen at all during the 2020 season due to COVID protocols.

A few days later, more than 5,000 fans will attend the spring game to catch their first glimpse of the new offense, the quarterback battle and the start of the Avalos era at Boise State.

“We’re getting back to a little bit of normalcy,” Avalos said.

Interviews with the media were strictly done on a video conferencing platform called Zoom when the pandemic hit last March. Avalos pushed for a socially distanced, in-person media session prior to the start of spring ball, which happened at the 50-yard line on the blue turf in early March.

Wednesday was his second time meeting in person with the media. It was also the second practice he’s allowed the media to catch a glimpse of while watching from the stands.

There was no spring game in 2020 due to the pandemic and none of the practices in fall camp or the season were open to the media. Every interview during the 2020 season was done virtual, even for media that traveled to road games.

Most interviews this spring have been done virtual, but the easing of some restrictions and opening up of practice certainly appears to indicate things are on the right track to a more normal 2021 season. Avalos appears to be at the forefront of wanting to make that happen — which includes fans in the stands and a more traditional game day experience in and around the stadium.

“We’re excited to get back moving forward,” Avalos said.

Boise State will take another important step Saturday when fans are allowed inside for the spring game. Roughly 900 fans were allowed inside Albertsons Stadium for two of Boise State’s home games last year, but the Broncos mostly played in empty stadiums.

More than 5,000 fans will attend Saturday and Boise State remains optimistic the stadium can be at full capacity by the fall.

Avalos thanked new athletic director Jeramiah Dickey, the leadership on campus and local health officials for developing a plan to have the spring game and with fans in the stands. Limited tickets still remain for $5 at BroncoSports.com.

One key dynamic helping fuel the optimism towards a more normal football season this fall is the vaccine rollout and the related declining COVID-19 numbers. Avalos said “some of us have got the vaccine,” but added he doesn’t plan to encourage or push his players to get it. The decision will be up to them.

“We’re for people that want to get it and if someone doesn’t want to get it that’s totally up to them,” Avalos said. “We are educating them. Our medical staff has done a good job of educating our players and staff on the benefits and if they don’t choose to get it, also the potential benefits of not getting it.

“We’re allowing people to make choices as they choose.”

As for Avalos’ thoughts on the Broncos so far this spring on the field? He mentioned wide receivers Steph Cobbs and Billy Bowens and center Kekani Hololamia-Gonzalez as standouts on offense, while defensive tackles Scott Matlock and Scale Igiehon and safeties JL Skinner and Tyreque Jones have had impressive springs on defense.

Maybe the most intriguing part of Saturday’s spring game will be the unofficial debut of offensive coordinator Tim Plough’s new offense. Plough installed his high-octane, up-tempo offense this spring and while players certainly haven’t mastered it yet, fans and media alike should get a taste as to what is in store moving forward.

“There’s a tempo that is certainly different,” Avalos described. “There’s an opportunity to play at different speeds and go execute at a different speed that we consistently haven’t in the past. There’s not as much substituting in and out. It’s ‘we’re going’, regardless of what personnel (is in the game).

“We’ll see an explosive offense with precision. That’s really what we’re working on obviously. It’s a new offense and that comes through reps and creating confidence and fundamentals and techniques that execute and obviously the timing within it. We still have the shifts and motions that defenses will have to prepare for, but it’s at a faster pace.”

But the most encouraging thing to happen Saturday might not be from the offense or defense. It will be the cheers coming from the stands.