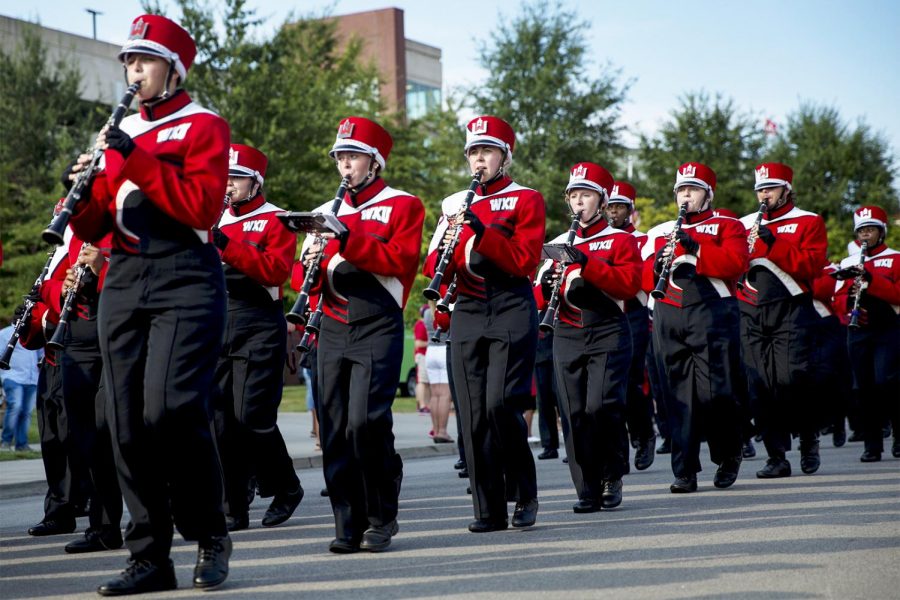 The Big Red Marching Band marches down the street to the stadium before the Hilltoppers game again Rice University on Thursday September 1, 2016 at L.T. Smith Stadium.

Season after season, game after game, and even loss after loss, the Big Red Marching Band stands tall, ready to promote the Hilltoppers on gameday.

The Big Red Marching Band plays a crucial role in sporting events at WKU. It performs for all home football games, select away games and provides pep bands for basketball, volleyball and a variety of other sports and campus events. No matter what the score ends up being, the band remains supportive.

The band has seen impressive growth over the years, increasing from 118 members 10 years ago to its current 284 members. Despite a sizable hit to its operating budget and staff last spring, the band has persevered and even grown in size.

Members of the band represent a variety of majors, but they all come together in sharing the common goal of showing school spirit and a love for music.

“The Big Red Marching Band is the largest student organization on campus, the largest college band in Kentucky, and the definition of inclusion and diversity as student members come from all colleges and every corner of campus,” Scott Harris, the head of the WKU Department of Music, said in an email.

Along with the cheerleaders and dance teams, the Big Red Marching Band provides songs and crowd support throughout games.

“We hope the band helps encourage the team to play their best, to not get discouraged, and to always push a little harder,” Harris said. “While we all hope for a win, the fundamental goal is an outstanding college experience for all participants.”

Students in the band said they genuinely enjoy being a part of the experience, wearing their red colors in support of their university.

Manuel Pacheco, a sophomore from Mayfield, marches in the band and plays sousaphone. He said he enjoys his commitment to the band.

“Being here in a big band full of great people is my favorite thing,” Pacheco said. “But I also enjoy cheering on the sports teams.”

Pacheco said that even if the band knows the season isn’t going well, its enthusiasm doesn’t change.

“The band still approaches every game with the same level of enthusiasm towards supporting our players and creating a good atmosphere for the games,” Pacheco said.

Gary Schallert, the director of bands, said he hopes the band has a positive impact on all of the sports teams.

“We love our Tops,” Schallert said. “We want to see all of our sports teams do well, and if they’re struggling, or if the score is not how we want it to be, we’re there to support them—good or bad. I think that’s our role.”

Recently, the band traveled to Middle Tennessee State University to support the WKU football team. It worked alongside the MTSU band to perform a joint halftime tribute in honor of Veteran’s Day. A video of the two bands playing “God Bless the USA” has been viewed over 73,000 times and shared over 11,000 times on Facebook.

“Given our current political climate, it’s quite powerful to see these two schools, red and blue, stand side-by-side supporting our school, celebrating our country, and sharing great music,” Harris said.

Harris said he recognizes the hard work put in by the band throughout the year. In the rain, cold, extreme heat, and even when the outcome of games isn’t desirable, it can be hard to keep up good energy.