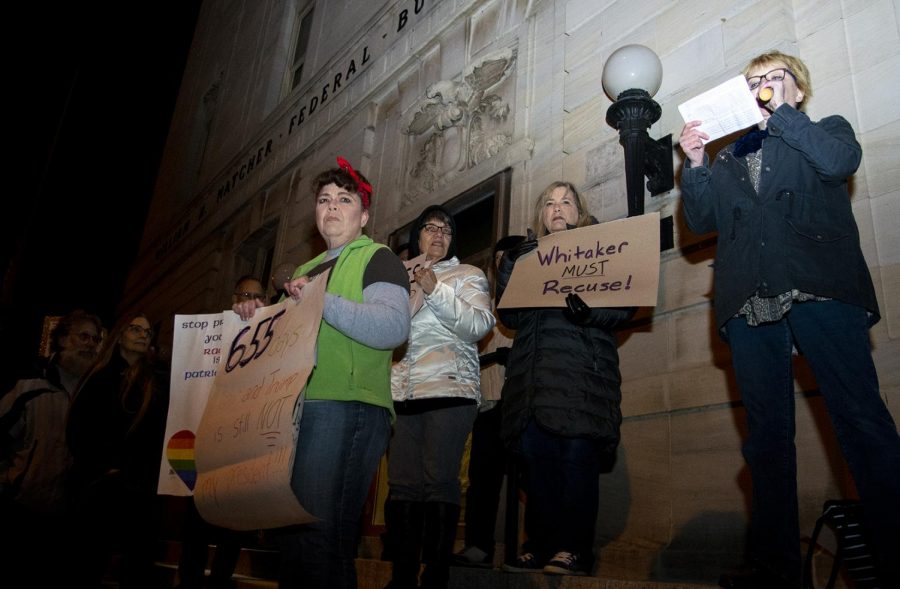 Protestors gathered outside the Warren County Justice Center on Thursday night to rally against President Trump's firing of Attorney General Jeff Sessions. They marched from the justice center to Circus Square Park.

Activists lined up on the steps of the Warren County Justice Center to protest the firing of Attorney General Jeff Sessions Thursday evening.

The protesters on the corner of Center Street chanted phrases such as “Racist, Sexist, Anti-Gay, Donald Trump: Go Away,” “Just Because You Fire the Cop, Investigations Don’t Stop” and “This is What Democracy Looks Like.” The protest began at the Warren County Justice Center, but the march took to the streets of downtown Bowling Green.

Sessions recused himself from looking into Special Counsel Robert Mueller’s investigation regarding Russian collusion within the 2016 presidential election according to an article  from the Washington Post. Mueller is an American attorney who served as the sixth director of the Federal Bureau of Investigation from 2001 to 2013 and is currently investigating the 2016 election.

Sessions recused himself in 2016 because he said he had several meetings with the Russian ambassador, Sergey I. Kislyak, and looking into it would have been a “conflict of interest.” Trump fired him on Wednesday, the day after the midterm elections.

Trump said he did not see any reason for Sessions to recuse himself from any investigations into cases related to the 2016 campaign because his own department had looked into the matter.

Protestor Bowling Green native Sarah Marsh said Trump should not have fired Sessions and needs to keep the Mueller investigation alive. Marsh said the protest is part of a national movement called “Trump is Not Above the Law.”

Maureen Davis, one of the local coordinators of the Bowling Green event, said the firing of Sessions affects all citizens because it could impact U.S. democracy.

“We’ve been witnessing the corruption and conflicts of interest and obstruction of justice from this administration for years now and a red line has been crossed and we need to demonstrate that by taking our feet to the streets,” Davis said.

“It was two years ago when Sessions recused himself from the Russia investigation,” Tinnell said. “There was no reason for Trump to fire him the day after the midterm elections. I suppose he thought that maybe since the elections didn’t go as he’d planned, he’d go run the show himself by just firing everyone.”