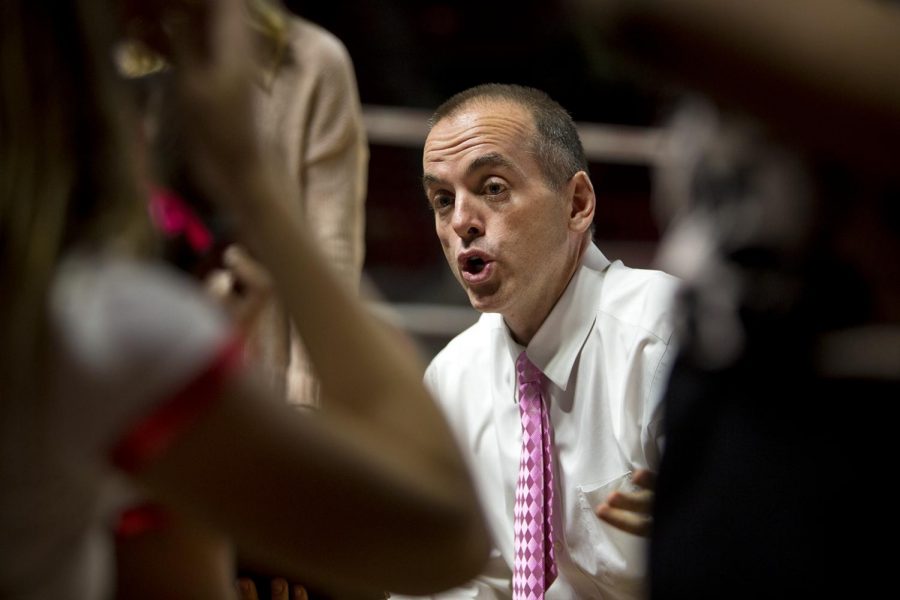 Head coach Travis Hudson speaks to his team during a timeout in the Lady Toppers' matchup against Texas-El Paso.

WKU volleyball added three players to the 2019 roster with a trio of signings.  Paige Briggs, Avri Davis and Jennifer Rush have all signed National Letters of Intent with the Lady Toppers.

Head coach Travis Hudson said the three players are a group that fits a lot of needs.

“We desperately need more help on the outside and these are three kids that can all play the outside hitter position if we need them to,” Hudson said in a press release. “And it’s a really great combination of athleticism and skill, and I think the three of them collectively will bring a lot to the table in 2019.”

Paige Briggs, an outside hitter out of Michigan, is a three-time All-Region selection, two-time Second-Team All-State, 2018 Under Armor All-American honorable mention and Miss Volleyball Finalist in the state of Michigan.

“She’s a kid that helps you in so many ways and is a player that the 2018 version of WKU volleyball could really use,” Hudson said.

Avri Davis will leave her high school in Spring Hill, Tennessee, as the all-time leader in blocks in addition to amassing more than 1,000 kills during her prep career. A two-time All-State selection, Davis was named a top 100 recruit in the 2019 class by PrepVolleyball.

“Every interaction with the players and coaches left me optimistic about the great experience that is WKU,” Davis said about her decision to come to WKU.

Coach Hudson compared Davis to freshman Lauren Matthews in terms of both players’ impressive athleticism. While the middle hitter’s role hasn’t been filled out just yet, Hudson said Davis has the ability to help the Lady Toppers at all three positions along the net.

Jennifer Rush is an outside hitter out of Granville, Ohio, that received All-State honorable mention in her last varsity season.  Rush said she loved the visit to the Hill, falling in love with the coaches and the campus, which she said “felt like home.”

Someone the team began recruiting later on in the process, Hudson said Rush is just a player that “slipped through the cracks.”

“She’s the one that the recruiting process was probably the shortest with, but we’re no less excited about her than we are either of the other two,” Hudson said. “Jen’s a kid that’s a pretty special athlete and I think has a real drive to become a great player.”