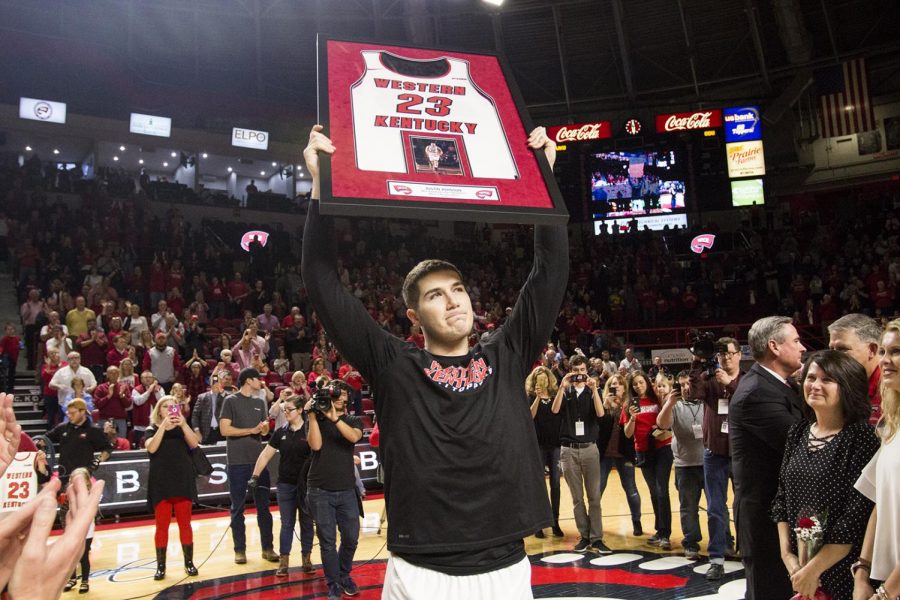 WKU senior forward Justin Johnson (23) holds his framed uniform over his head in Diddle Arena during senior night on Feb. 24. Johnson scored 19 points and had 11 rebounds during the game vs. Old Dominion.

WKU Athletics has posted its highest Graduation Success Rate in program history, according to the NCAA.

“This is a tremendous accomplishment for our student-athletes, coaches, and athletic program as a whole,” athletic director Todd Stewart said in a press release. “Along with leading Conference USA with 24 total championships since joining the league in 2014, our student-athletes are also achieving at their highest levels in the classroom as well. It is a true testament to their dedication and hard work during their time on the Hill.”

WKU’s GSR scores came in above the national average in baseball (83), men’s basketball (85), women’s cross country and track (91), softball (95) and the four programs with perfect scores.

You can find the national averages of each sport from the NCAA here.

“Student-athletes continue to achieve academic success at record levels,” NCAA President Mark Emmert said in a press release. “When the GSR was created more than 15 years ago, the NCAA set an aspirational goal of 80 percent of student-athletes graduating. College athletes have met and exceeded that goal — as they often do with any challenge.”