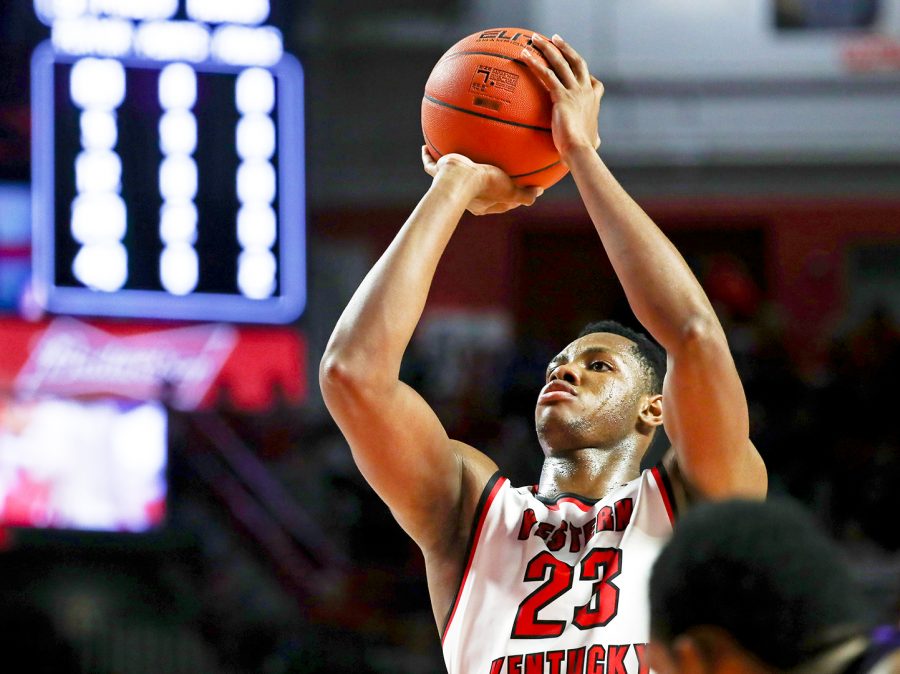 Despite recent losses to Central Florida and Indiana State, WKU basketball’s star freshman is already living up to high expectations.

Through his first five collegiate games, Bassey is averaging 14.7 points, good for third on the team, and 10 rebounds, which leads the team. He also leads the team in field goal percentage and blocks. In his first game at 25th-ranked Washington, Bassey registered a double-double in a tough matchup with senior Noah Dickerson. After the UW loss, Stansbury was impressed by Bassey’s demeanor.

“I thought Charles was very even keel,” Stansbury said. “He’s like that most days. I didn’t think his emotions were up and down. I thought he played consistent.”

The consistency carried over to the Myrtle Beach Invitational. In the invitational championship, the star freshman exploded for 25 points and 10 rebounds and even hit his first 3-pointer against one of the longest players in college basketball Tacko Fall.

Bassey was the lone bright spot in WKU’s 63-54 loss at Indiana State with 16 points and eight rebounds. Even with the impressive start, Stansbury sees ways for Bassey to improve.

“I told Charles that when we get in the bonus, you can’t catch it and finesse it around that rim,” Stansbury said after the Hilltoppers win over UT Martin Nov. 10. “You’ve got to catch it and go through somebody. It’s not about a soft post move, it’s about scoring it or getting to the free throw line.”

Even with small improvements to be made, Stansbury is confident Bassey will continue to improve.

“It’s about experience,” Stansbury said. “He’s probably never heard that told to him. He’s going to keep getting better.”

Charles Bassey was originally in the class of 2019 and garnered five-star status in that class. Bassey attended St. Anthony Catholic in San Antonio before transferring to Aspire Academy in Louisville. He dominated the high school level. Aspire head coach Jeremy Kipness raved about Bassey’s ability on the court.

“What’s so special about him is the fact that he’s such a team player,” Kipness said. “When we need a bucket, he’s going to create and finish. But he’s such a good passer, which opens up so many opportunities for everyone outside on the perimeter.”

Bassey’s recruitment was very quiet leading up to his commitment to WKU. He only took one visit to Louisville and didn’t get a lot of serious interest from major programs. Not only did head coach Rick Stansbury receive Bassey’s commitment on June 13, but the five-star center also announced he would reclassify to the 2018 class and play this season for the Hilltoppers.

Bassey came into the season with a lot of hype, but there was still work to be done to improve his game.

“He’s far from a finished product,” Kipness said when Bassey was in high school. “He’s concerned with his development. He wants to get better every single day. It’s just about building upon his strengths.”

Bassey cites coaching and his teammates as a big help for his adjusting to the college level.

“I have a good coach and good teammates,” Bassey said. “It just helps me every time with what I do. Playing these scrimmages helps with the chemistry of the team.”

Bassey will look to continue his successful freshman campaign Saturday when the Hilltoppers host Tennessee State.