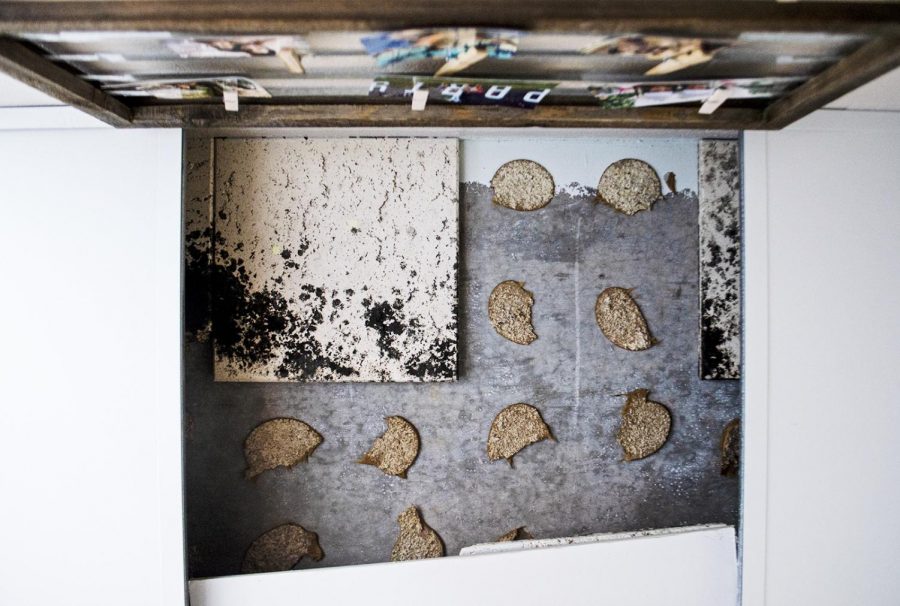 What appears to be mold hides behind a ceiling tile above Carson Roberts’ bed in Minton Hall on Wednesday, Nov. 8. Roberts is a freshman from Louisville who uncovered her ceiling tile and told WKU Housing what she found on Tuesday. Roberts was told she needed to move because her dorm room could be toxic now.

It’s well past the halfway point of the semester, but residents of Minton Hall have another stress to add to their to-do list. As of Monday, all 348 residents will be relocated to other on-campus housing.

Minton Hall will close Monday for the rest of semester to remove mold found within the building. The dorm will reopen Jan. 18, 2019.

Louisville freshman Rachel Reisert said the experience has been “a struggle” because of the many unknowns.

“I don’t know where I’m going to live in the next few days and I’m going to be split up from my roommate,” Reisert said.

Students are currently unaware of new residence hall assignments, but should receive them sometime Thursday through the WKU Housing Portal at www.wku.edu/housing/portal, director of public relations Bob Skipper previously told the Herald.

Louisville freshman Matthew Rafla said one of his professors moved the deadline for a paper because the mold was affecting so many students in the class.

“There’s a month left of school and I don’t know how [the mold] could have been immediately bad so quickly,” he said.

Danville freshman Mia Kendrick said she felt the blame should not be on the residence assistants but on Housing and Residence Life.

“I think the main problem isn’t that the mold itself is dangerous, but that it’s taken them so long to address it,” Kendrick said. “They kept us in the dark about it until the last minute when they brought it up.”