WKU hits the road to take on top 25 Huskies 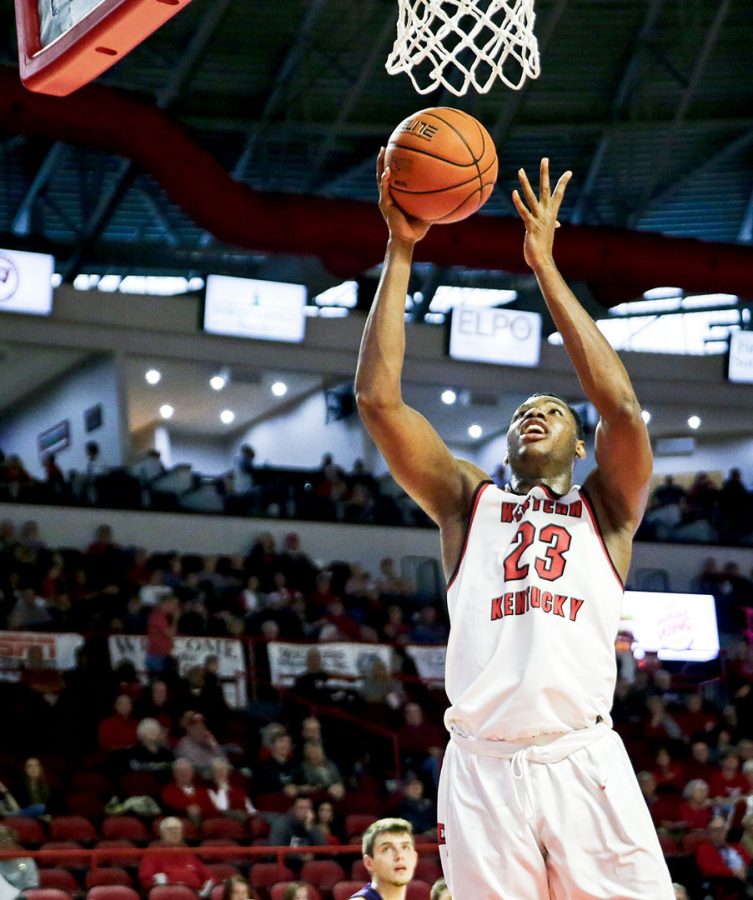 WKU freshman guard Charles Bassey (23) jumps for a layup during an exhibition match vs Kentucky Wesleyan in E.A. Diddle Arean on Saturday, Nov. 3.

WKU basketball begins its 2018-19 season with a lot of expectations, but the Hilltoppers will be going into the home of another team with great expectations when they take on No. 25 Washington on Tuesday.

In addition to opening up non-conference play with a brutal matchup, head coach Rick Stansbury will also be missing a key piece on Tuesday night.

According to a statement from WKU basketball Saturday morning, graduate transfer forward Desean Murray has been suspended indefinitely for a violation of team rules. Murray joined sophomore guards Taveion Hollingsworth and Josh Anderson to be the third men’s basketball player suspended in one week. Hollingsworth was held out of Tuesday’s exhibition game after a marijuana citation. Anderson did not participate in Saturday’s exhibition after being charged with disorderly conduct Thursday.

Hollingsworth and Anderson will travel with the team to Washington, but Murray will not, Stansbury said Saturday.

“Good people make bad decisions, but just because you’re a good person that made a bad decision doesn’t mean it’s right,” Stansbury said after Saturday’s win. “There’s accountability with it. We’re not going to have it. We’re going to learn from it, and we’re going to get better from it.”

Hollingsworth was apologetic after Saturday’s game and promised the team would grow as a result.

“We are young and make mistakes, and we have to grow from it,” Hollingsworth said. “We all are sorry and we’re going to grow and do better.”

The off-the-court distractions are ill-timed with a tough opponent on the horizon.

Last season, UW finished with a 21-13 record in Mike Hopkins’ first year as head coach. Hopkins was also awarded with Pac-12 Coach of the Year.

The Huskies narrowly missed out on an NCAA Tournament berth but are a near-lock to make it in 2019. UW was picked to finish third in Pac-12 play in the preseason.

The Huskies return almost their entire team from a season ago. Sophomore guard Jaylen Nowell led the team in scoring with 16 points per game and garnered Pac-12 All-Freshman team honors. Senior forward Noah Dickerson returned to school after testing the NBA Draft waters. He led the Huskies in rebounding and was second in points. Point guard David Crisp, forward Matisse Thybulle and center Sam Timmins round out the talented Huskies starting five.

The Huskies were inconsistent in exhibition play. They opened play with a 91-73 win over seventh-ranked Nevada in a closed scrimmage despite being without Dickerson, but the Huskies only managed to beat Seattle Pacific by nine points in their next exhibition.

“This will make us better,” Stansbury said. “They’ve got a terrific team, they’ve got, I think, all 10 of their top scorers back.”