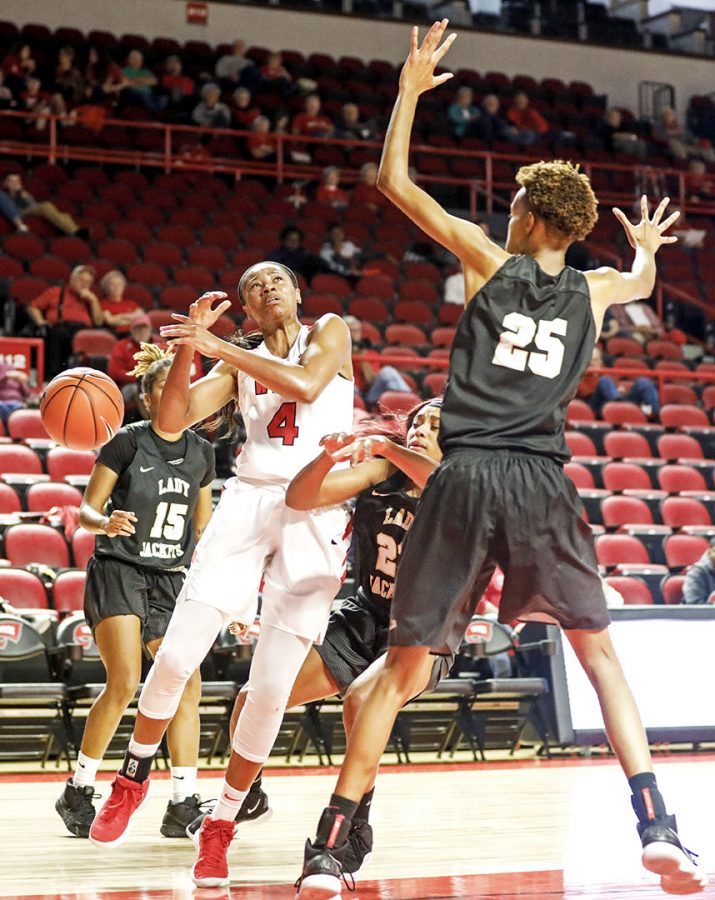 Redshirt junior guard Dee Givens (4) attempts to shoot for two as she defended by West Virginia guard Jordan Miller (23) and West Virginia forward Denisha Bowman (25) during the Lady Toppers' 104-74 win in the exhibition game against West Virginia University on Thursday Nov, 1, at the E.A. Diddle Arena.

With its exhibition slate complete after just one contest, WKU women’s basketball will tip off the regular season against in-state rival No. 5 Louisville on Tuesday night.

This year, the Lady Toppers could not have asked for a tougher opponent for their regular season-opener.  Louisville was ranked fifth in the preseason AP poll and fourth in the USA Today coaches poll published Nov. 1.

The Cardinals return most of their 2018 Final Four team, including senior guard Asia Durr. Durr was named an AP Preseason All-American after earning a First-Team All-American nod a season ago. During the Cardinals’ last matchup against the Lady Toppers, Durr tied for the team lead in points with 16.

“Once you get the defensive rebound, you know somebody’s running down the floor,” sophomore guard Sherry Porter said. “So, it’s just that selflessness. That’s how we get all those assists.”

Redshirt junior guard Dee Givens scored a game-high 27 points against WVSU, including hitting 50 percent of her shots from beyond the arc. Givens said she was impressed with how her younger teammates played against the Yellow Jackets.

“There’s still some things we can work on,” Givens said. “It’s just good for [the newcomers] to get their jitters out now before we play Tuesday.”

WKU head coach Greg Collins said he was focused on making sure his team pushed the tempo and ran as much as possible against WVSU, which is something he wants to see continue against tougher opponents, including the Cardinals.

“I’d rather shoot two-on-one or one-on-zero than five-on-five,” Collins said. “I don’t anticipate that we’ll have that high of a success rate with our defense against Louisville…but I feel like if we continue to work at it, we’ll get better and we’ll get stronger and that’ll still be a part of our game.”

The Lady Toppers’ average possession against WVSU lasted only 12 seconds, which Collins said was a point of emphasis. Collins also said the team has been working hard to make sure that no one is uncomfortable playing quickly once game time arrives.

“I feel like we’re going to play however we practice,” Collins said. “There’s some things that we do every single day, and you see those things in their play on the court.”

For Collins, Tuesday’s contest against Louisville will be his first regular season game at the helm for the Lady Toppers. Though he has spent the last six years at WKU as an assistant under former head coach Michelle Clark-Heard, this game will officially mark the beginning of his tenure as the program’s head coach.

The much-anticipated meeting between the Lady Toppers and the Cardinals tips off at 7 p.m. Tuesday in Diddle Arena. The game will also be available live on ESPN+, as it is the first of four WKU women’s basketball games selected for streaming on the new platform this season.