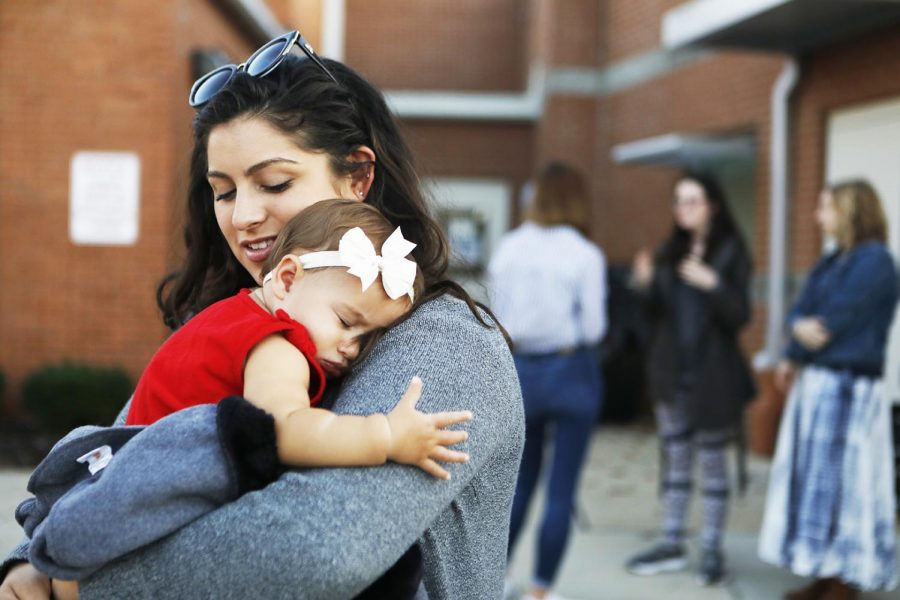 Kaitlyn Carey of Bowling Green KY and her daughter finished voting at the W.R. McNeill elementary school during the midterm election on Tuesday Nov. 6, " I'm voting strictly Republicans," Carey said, "it's very very important to vote because if you don't vote you don't have a say in what goes on in your country."

Not even the torrential rain and tornado warning issued Monday night could keep Warren County voters out of the polls Tuesday as they cast their ballots for a set of candidates that could help shape the future.

Voters were able to vote at W. R. McNeill Elementary School from 6 a.m. to 6 p.m.

Louisville native and WKU sophomore Sarah Starmer said she had voted previously in Louisville but chose to change her registration to Bowling Green because of the convenience.

“It’s important to vote and have your voices heard,” she said.

Joining her at the polls were friends Brigid Stakelum and Amanda Jones, both first-time voters. Stakelum is a sophomore from Louisville who also chose to register to vote in Bowling Green because it was easier than trying to get back to Louisville to vote.

“The process for absentee ballots was a little confusing, I don’t have a car and WKU didn’t cancel classes,” Stakelum said.

“Democracy is not a spectator sport,” Stakelum said. “We have to be involved to see change. There are people like the coroner, the school board and the jailer that run and have an impact on our everyday lives.”

Jones, a Glasgow native, said she wanted to register in Bowling Green because she spent most of the year here and felt her vote would have a bigger impact.

“I didn’t think about voting in my teen years, but then the 2016 presidential election happened, and it all changed,” she said. “I never realized before how much power each vote had. Each one genuinely makes a difference—every vote counts.”

Bowling Green resident Randy Stathers said he has voted in every election since he was eligible for the 2000 presidential election.

“Voting makes your voice heard,” Stathers said. “[The election] is a turning point in the country to either continue moving forward with Trump or going with opposing views.”

Chicago, Illinois native Lisa Ware said she usually voted in previous elections via absentee ballot in her home state of Illinois but chose to register in Bowling Green for this election because she felt personally connected to the issues on the ballot.

“We have to take care of minority communities on campus,” Ware said. “Even more young people are voting because it’s our futures that are being affected.”