Minter continues to focus on human rights after victory 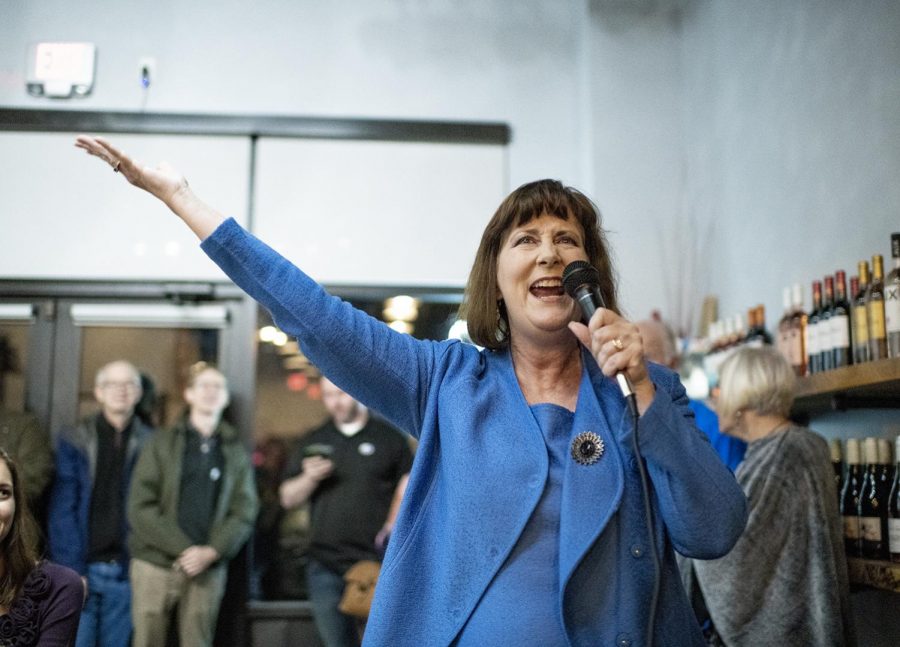 Patti Minter gives a victory speech following her win as State Representative in the 2018 midterms on Tuesday Nov 6.

Minter, the Democratic candidate, received 6,253 votes, or 53.5 percent of the vote, while Republican candidate Ben Lawson received 5,436 votes, or 46.5 percent.

After former State Rep. Jody Richards announced his retirement on Jan. 8, Minter announced her candidacy. She said she initially planned to run for Bowling Green city commissioner, but she was recommended to run for state representative.

“People were ecstatic,” Minter said about how the community reacted to her candidacy. “The response was overwhelming, and I received support in the most positive way.”

Working about 100 hours a week near the end of her campaign, Minter said she and her campaign supporters knocked on about 14,000 doors in Bowling Green.

“The most difficult part is the time that I had to spend away from family,” Minter said. “Running is a life-changing experience.”

Minter said she will focus on the issues from her campaign’s platform, including investing in education, raising the minimum wage, guarding animal welfare, protecting health care and increasing affordable housing, as previously reported by the Herald.

She said she also looks forward to co-sponsoring the first statewide fairness bill, which would provide housing and work protections for LGBTQ people in Kentucky.

Eric Reed, WKU’s history department chair, said he did not expect Minter to announce her candidacy, and he became a large supporter for her.

“She’s been an advocate for the community, and you can see her conviction,” Reed said.

Reed said he connected to Minter on many professional levels when he started teaching at WKU in 2002, and he was impressed by her energy and her advocacy work in the legal community.

“I think this is going to be a different kind of experience,” Reed said. “I expect her to do really well.”

Louisville senior and history major Zach Brumback had his first class with Minter last semester, an American legal history class. He discovered Minter was running for state representative when he started seeing her signs around Bowling Green, and he helped campaign for her several times in late August and early September.

“I was very excited because I didn’t know how it would turn out,” Brumback said about her victory. “I believed in what she was trying to accomplish.”

Robert Dietle, WKU’s School of Journalism and Broadcasting interim director, worked at WKU when Minter started teaching in 1993. He said he expected her to run for the city commissioner position in Bowling Green, but he was not surprised that she ran for state representative.

“A lot of us knew she had interest in public service,” Dietle said. “I think she ran a textbook campaign.”

Dietle said Minter is a strong and persistent person, citing how she advocated for the needs of the faculty during her time as faculty regent from 2007 to 2014 on WKU’s Board of Regents.

Nashville senior and broadcasting major Natalie Turner said she knew of Minter while following the Bowling Green Fairness Movement and the LGBTQ community, but she did not meet her until she took her human rights class this semester. Turner voted for Minter while voting in Bowling Green for the first time.

“I knew what she stood for,” Turner said. “She obviously cares about the LGBTQ community.”

Turner said she was excited about Minter’s candidacy for state representative. On Wednesday, when Minter walked into Turner’s class, the class started applauding to celebrate her victory.

“It seemed too good to be true that she would actually win,” Turner said, remembering the election night. “I had been keeping track of the election results. I happened to open Facebook, and I saw a video that was essentially Minter giving her victory speech, and I remember my jaw dropped.”

Minter said she will continue teaching online courses as a full-time professor at WKU while serving as the 20th District Kentucky State Representative.

“I’m humbled and grateful to the people of Bowling Green for entrusting this position to me,” Minter said. “I promise to work as hard as possible. I’m ready to give it my all.”

Reporter Nicole Ziege can be reached at 270-745-6011 and [email protected] Follow Nicole Ziege on Twitter at @NicoleZiege.