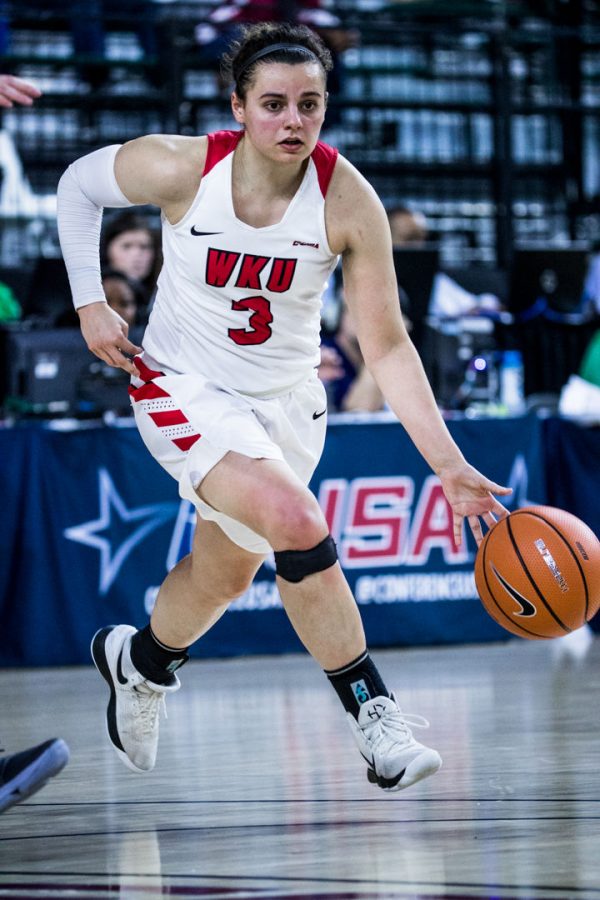 WKU Guard Sidnee Bopp (3) drives the ball during the Lady Toppers 77-61 win in the semifinal game of the Conference USA tournament against University of North Texas on Friday March 9, 2018 at The Star in Frisco, Tx.

The WKU women’s basketball team went into the fifth-place game of the Vancouver Showcase hoping Gonzaga would be all bark and no bite.

Unfortunately for the Lady Toppers, that was not the case on Saturday afternoon.

The Bulldogs (6-1) jumped out to an early advantage over WKU (2-6) and never looked back, cruising to a 76-55 victory. GU outrebounded WKU 47-29, posted 19 second-chance points and outscored the Lady Toppers in the paint 42-34. WKU also allowed the Bulldogs to shoot 45.3 percent from the floor and 43.8 percent from deep.

WKU struggled to get going on offense, shooting 40 percent from the floor and 28.6 percent from beyond the arc. The Bulldogs had allowed opponents to score only 55.6 points per game so far this season, which the Lady Toppers’ offensive output matched almost exactly. WKU also continued its difficulties at the foul line, making only 7-of-15 attempts.

Once again, the Lady Toppers were led by redshirt junior forward Dee Givens and sophomore forward Raneem Elgedawy. After scoring 11 in the second half, Givens tied for the team lead in points with 13. Elgedawy came up just short of her second double-double, notching 13 points and eight rebounds.

GU scored the game’s first basket on a layup. Elgedawy answered with one of her own on the other end, tying the game 2-2 at the 8:52 mark. After that bucket, everything came crumbling down for WKU.

The Lady Toppers failed to register another point for the next 4:35 of clock time, allowing the Bulldogs to establish a lead they would not relinquish for the rest of the contest. An and-one layup from freshman forward Meral Abdelgawad snapped an 11-0 run for the Bulldogs with 4:17 remaining in the quarter. The Lady Toppers kept fighting, eventually trimming the GU lead to seven at the end of 10 minutes played.

After WKU opened the second period trailing 19-12, the Lady Toppers continued chipping away at the Bulldogs’ advantage, pulling to within four points early on. The Lady Toppers went cold on offense, allowing Gonzaga to extend its lead once more.

A 3-pointer from redshirt sophomore forward Arame Niang cut the deficit back to within four for WKU at the 4:20 mark, but the Lady Toppers could not capitalize. Although WKU outscored GU 14-13 in the second period, the Bulldogs maintained a 32-26 advantage at the half thanks to a late offensive surge.

GU opened the second half with two quick layups, forcing Collins to take a timeout with 8:52 left in the third period. WKU started making shots, drawing within nine of GU. But the Bulldogs continued to have an answer for everything the Lady Toppers could muster on offense, mounting a 6-0 run to extend their lead back to 15 points.

However, a defensive miscue midway through the period put WKU down for good.

Referees called an unsportsmanlike foul on Brewer at the 6:29 mark. The foul resulted in two made free throws for the Bulldogs, which extended their lead over WKU to 20 points for the first time. Following that sequence, the Lady Toppers went on another extended scoring drought.

WKU managed to hit a few shots in the closing minutes, but in the end, it was simply not enough. The Bulldogs’ stifling defensive performance proved to be too much for the Lady Toppers, as the fell by a 21-point margin.

WKU finished sixth in the Vancouver Showcase’s eight-team field. This game was the third in as many days for the Lady Toppers. It was also WKU’s fifth contest in eight days. Following the loss today, the team posted a 2-3 record in those games. The Lady Toppers will not play again until they meet Morgan State Wednesday at 6 p.m. in Diddle Arena.