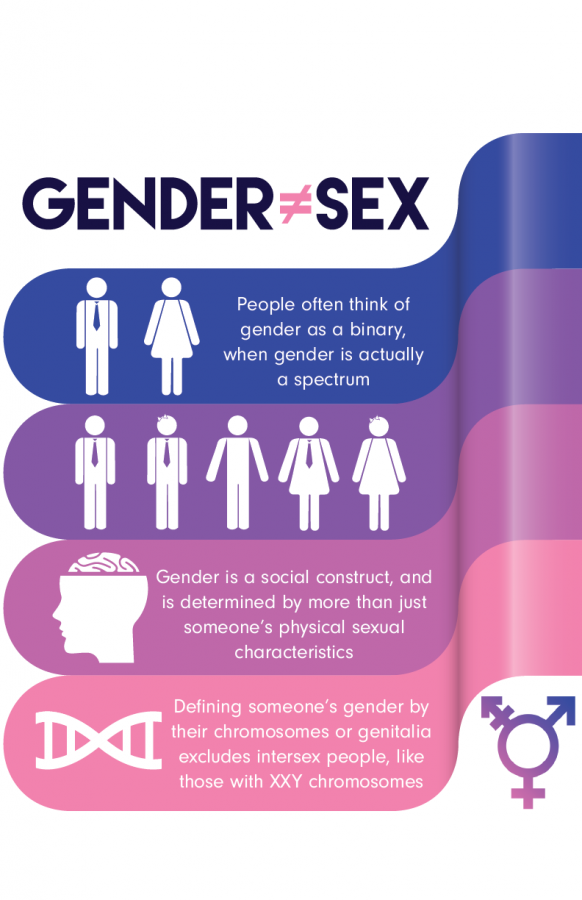 The Issue: The Trump administration has proposed a new definition of gender which requires gender to be determined by genitalia at birth.

Our Stance: If the administration successfully redefines gender under these parameters, it will  erase the identities of non-binary people under the law and will unjustly rob them of their civil protections.

The LGBTQ community has experienced major strides in recent years: same sex marriage was legalized and gender expression was expanded under federal law. But the Department of Health and Human Services could roll back progress and deny rights to transgender, intersex and gender non-conforming people if its latest proposal goes into effect.

The Trump administration is considering legally redefining the definition of gender under Title IX, the federal civil rights law that prohibits gender discrimination in educational programs that receive federal funding, according to a memo leaked to The New York Times in October. Under this policy, gender will be decided explicitly by genitalia at birth. Though the proposal comes from the HHS, the revised definition is expected to be picked up by other agencies.

Since then, transgender activists and LGBTQ allies have protested the proposal, and scientists have condemned the reasoning behind it. The administration has been quiet about the memo since it was leaked to the press, and the fate of transgender rights remains in question.

This new definition narrows gender expression and defies sex science, requiring “a person’s status as male or female based on immutable biological traits identifiable by or before birth,” effectively rendering gender unchangeable by law, according to The New York Times. This definition attempts to guise the administration’s decision to erase the rights of trans and intersex people under the pretext of science.

But scientists who specialize in gender and sex have long understood that gender and sex are separate entities and should thus be treated as such by law.

In response to the proposal, over 1,600 scientists signed a letter calling the Trump administration’s suggestion a matter of pseudoscience and saying, “Though scientists are just beginning to understand the biological basis of gender identity, it is clear that many factors, known and unknown, mediate the complex links between identity, genes, and anatomy.”

The letter also says that no scientific test that could readily determine gender or sex exists.

Sex relates to biology, and gender refers to the performance of social norms such as a person’s portrayal of masculinity or femininity.

By conflating sex with gender, the administration is disregarding the lived experiences of 1.4 million trans Americans. Not to mention, a binary system does not accurately reflect the full spectrum of sex or gender.

Expression of gender is not as black and white as the administration would like to legislate.

Gender is alterable, and it directly correlates to dominant social narratives and stereotypical portrayals of men and women. Masculinity and femininity are neither mutually exclusive nor immutable.

Additionally, the proposal’s requirement that the “sex listed on a person’s birth certificate, as originally issued, shall constitute definitive proof of a person’s sex unless rebutted by reliable genetic evidence” would require genetic testing to legally determine an alteration to a person’s gender identity. This intrudes on individual privacy and overestimates the accuracy of chromosomal makeup as a proper indicator of sex and gender.

Intersex people, those born with sex characteristics such as gonads, genitals or sex chromosomes that do not appear to fit in the binary definitions of the male or female sex, constitute one in every 1,500 births and are unaccounted for under the administration’s umbrella definition of gender and sex.

In an article for Time, Elizabeth Reis, a gender and bioethics professor at Macaulay Honors College, City University of New York and the author of “Bodies in Doubt: An American History of Intersex,” explains that a person born with female genitalia who has XY chromosomes, which are typically attributed to males, may be raised as a woman and present as a woman despite her chromosomal makeup. This is because both genitals and chromosomes are sometimes inaccurate markers for gender expression.

Trans people may also undergo hormone replacement therapy or gender-affirming surgeries (though they do not necessarily have to do this to identify as trans), which would also complicate the fidelity of the revised definition.

“To legally enforce an artificial binary based strictly on chromosomes is scientifically unsound,” Reis wrote.

The binary system of sex and gender the Trump administration is proposing we adhere to is man-made and lacks scientific foundation. The adoption of such an oversimplified conception of gender does not account for the lived experiences of many Americans, and it unjustly reinforces harmful gender stereotypes.

A move to further dissemble the rights of the LGBTQ population is not particularly shocking coming from an administration that has attempted to ban transgender people from the military, tried to remove questions regarding gender identity from the 2020 census, and has “withdrawn Obama-era policies that recognized gender identity in schools, prisons and homeless shelters.”

It also is not shocking that the proposal relies on false science as a means to justify an end.

The LGBTQ community at WKU and around the country has been repeatedly targeted by the Trump administration’s prejudiced policy proposals, and this is no exception. We cannot stand by and allow our fellow Americans to have their inalienable rights stripped away from them. Transgender and non-binary people are not pawns that can be used and thrown out to justify any administration’s agenda.