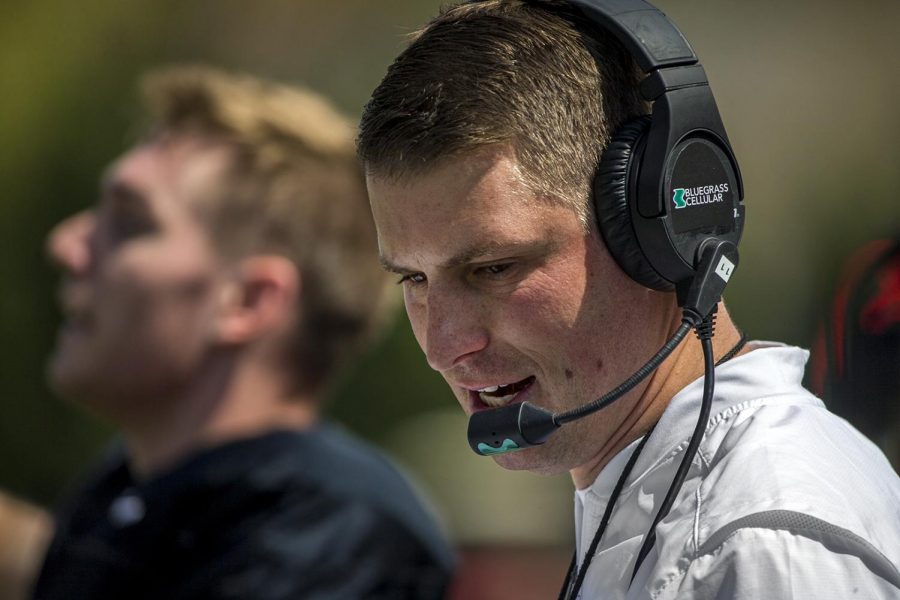 Head coach Mike Sanford speaks into his headset during the spring football game on April 21 in Houchens-Smith Stadium. Sanford has yet to make a decision on who the starting quarterback will be for WKU when football season starts.

WKU’s senior football players will take part in their last home game of the season on Saturday night, as the 1-9 Hilltoppers take on a 1-9 Texas-El Paso team in a battle for last place in Conference USA.

“It’s just been surreal,” Whyte said. “One of my last games at the Hilltopper’s stadium. I came in my senior year and my first year, just playing in the state championship so I’ve been here for a minute, so this will be nice”

WKU head coach Mike Sanford said that honoring the seniors was important for him, but getting the win is his main focus.

“Senior bowl for our seniors,” Sanford told the media Monday. “For that group of 10 players and a couple more that’ll be honored. I think the most important thing is that we are fully, fully focused on UTEP and that’s really all that matters right now is preparing for a team that’s playing better.”

Sanford said that the Hilltoppers aren’t taking UTEP lightly, despite the Miners also having a dismal record.

“We’re gonna go into this game preparing for the best version of any team we’ve played all year,” Sanford said. “That’s our focus, is solely, solely focusing on beating UTEP and winning this football game.”

Sanford said that he was looking forward to seeing the seniors honored, despite most of them having been recruited before his tenure began in 2017.

Kickoff for WKU vs. UTEP is scheduled for 6:30 p.m. on Saturday at Houchens-Smith Stadium. The game will also be available to watch on beIN sports.