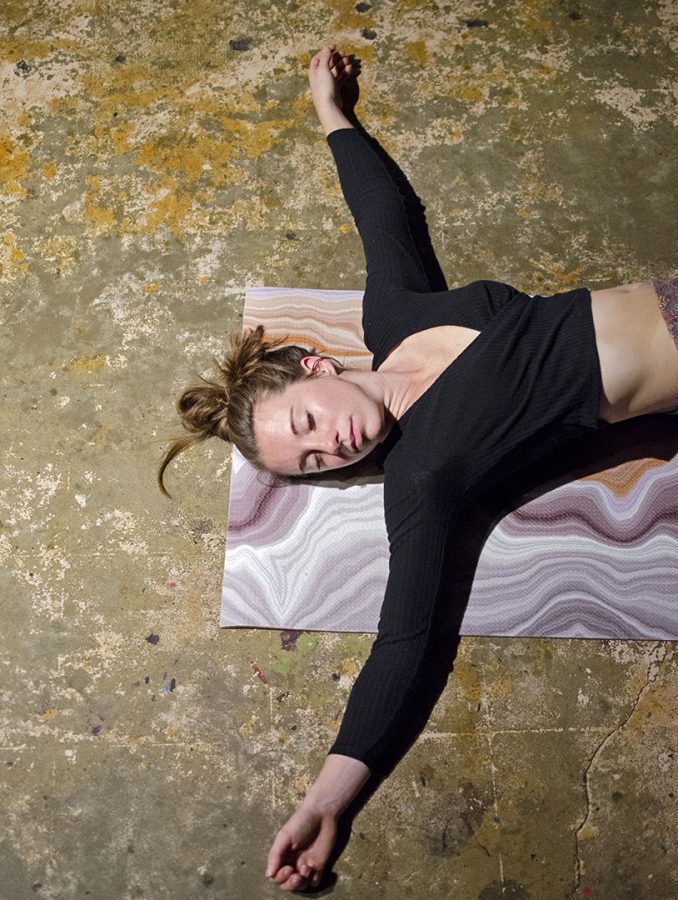 WKU alumna Lauren English teaches yoga at the A-Frame in Bowling Green on Tuesday Oct. 30, 2018. "I started this yoga business as a way to do what I love," English said. English took her first yoga class while she attended high school in Lexington, her hometown. English sets up her mobile studio with yoga mats and blocks she carries with her to wherever her next class is located.

No matter where you are, a yoga studio can always be close by.

English graduated from yoga teacher training in May 2018. While the other graduates were looking for yoga studios to join, English had other plans.

“I just realized I didn’t want to work for anyone else,” she said. “I just wanted to work for myself.”

She decided to open her own yoga studio, but with a twist: she would bring the yoga to her clients.

The main difference between a traditional and mobile yoga studio is that the instructor is not attached to one studio, building or location.

“I really love the freedom of having a mobile studio because sometimes, if you work for a traditional yoga studio, you’re trapped to one building,” English said.

Instead, she decided to bring the class to patrons. English invested in all of her own equipment. She and her partner set up the class, take payments, handle waivers and teach by themselves. When class is over, she packs everything up and leaves.

“What’s really cool to me is starting something from scratch,” she said.

English has seen a lot of growth in both her business and her students in the short amount of time it has been open. She had to build up her own clientele, but now has regular customers.

She said she can see her students getting physically stronger and better at balance. English said she enjoys knowing there are people out there that want yoga, they just couldn’t find the right studio before.

While the name may be hard to pronounce, it has a lot of meaning. Syzygus is an old Greek word that English learned in a religious studies class at WKU. It translates to “the one that works in the yoke with you.”

The “yoke” is a wooden tool that farmers used to bind oxen together for work. English chose to name her studio the Syzygus Movement Co. because she loved the imagery of having to work together to achieve a goal.

English later learned the actual root word for yoga is yoke. She said she then knew Syzygus Movement Co. was the perfect name for her studio.

Andrea Clan, a student of English’s, has been doing yoga since 2000. She visits multiple studios in the area and enjoys the Syzygus Movement Co.

Clan said the concept of a mobile yoga studio is wonderful.

“Everyone has busy lives,” Clan said. “This gives everyone a nice option.”

She said she thinks the idea is new and fresh, and she hopes it will catch on.

English brings the studio to special events, but also has set classes at different locations during the week. She usually teaches at two regular locations: Barren River State Park in Lucas on Saturdays at 8:30 a.m., and the A-Frame Bar in Bowling Green on Tuesdays at 7 p.m. Classes have an entrance fee of $10 or $5 with a WKU ID.

Features reporter Eleanor Tolbert can be reached at 502-386-4608 and [email protected] Follow on her on social media at @ellietolbert.