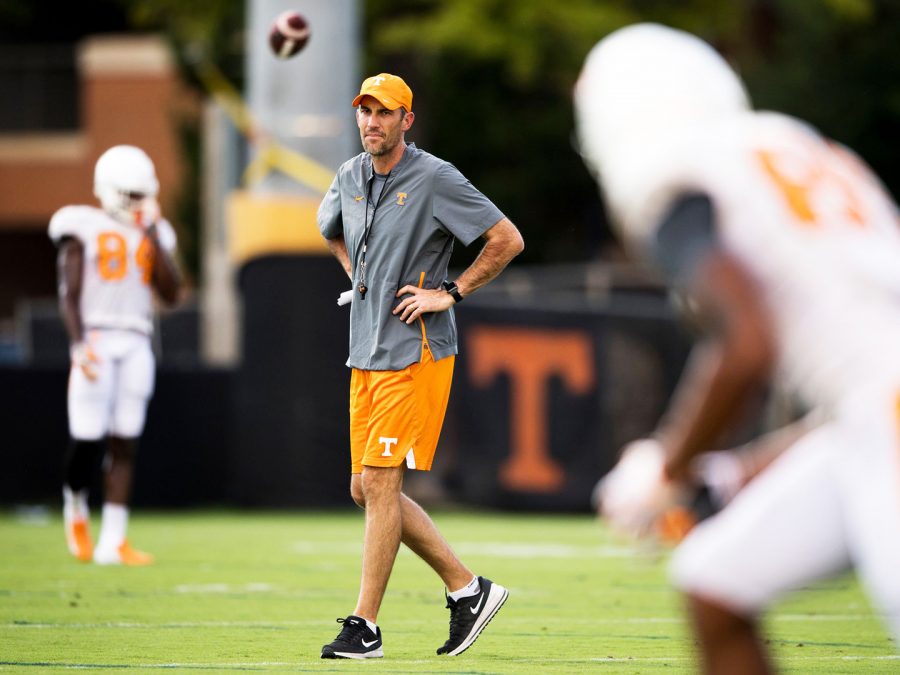 Stewart mentioned during his press conference he had a short list of possible coaches.

“You have to,” Stewart said. “Because you never know when something may happen, so that’s something we’re always prepared for.”

Helton helped run the WKU offense during the first of the Hilltoppers’ back-to-back Conference USA championships.

He then left to take the job as passing game coordinator and quarterbacks coach at Southern California under his brother and Trojans’ head coach Clay Helton.

During Helton’s time at WKU, offense ranked highly nationally in both points per game and yards per play. The Hilltoppers averaged 372 passing yards and 155 rushing yards per game during that span.

Helton headed to UT after the 2017 season under current Volunteers head coach Jeremy Pruitt. Helton has recently come under fire by UT fans after the Volunteers failed to make a bowl game, dropping the game that would have made them eligible to in-state rival Vanderbilt, 38-13.

It isn’t clear what Helton will be paid at WKU, but Sanford made $800,000 per season during his time on the Hill. Helton made $1.205 million as the offensive coordinator and quarterbacks coach at UT.

Under Helton, the Volunteers’ offense averaged 22.75 points per game along with 196.42 yards per game passing and 129.1 yards per game rushing. Tennessee finished the season 5-7 with its signature win coming over 15th-ranked Kentucky.

The Hilltoppers announced Sanford’s firing on Sunday and followed the announcement with a press conference.

“We have lost fans,” Stewart said at the press conference. “We have to get them back, and the best way to get them back is to play an exciting brand of football and win games, and that’s what our objective is. We did that before.”

WKU’s football attendance has plummeted over the last two seasons under Sanford. For the final home game against Texas-El Paso, announced attendance was just 6,221, which brought the season average to 14,321.

“It really hurt for [the players] because of the complete lack of energy we had in the stadium that night from a crowd standpoint,” Stewart said of the team’s seniors. “Their final Topper Walk—it might have had a hundred people there—and that just, that can’t be. And unfortunately, that’s what we’ve come to.”

The peak attendance for WKU football came in 2016 when the Hilltoppers played Vanderbilt at home. Attendance for the game was announced as 23,674 people, which exceeded capacity of Houchens-Smith Stadium, which is 22,113.

Sanford went 9-16 in two seasons on the Hill, including a 3-9 record for the 2019 season. While there had been speculation he would keep his job if he won the final two games of the season, Stewart said that while the two wins were good, they didn’t overshadow his full body of work.

Helton’s first game as head coach will come against Central Arkansas, as the Hilltoppers open the 2019 season against the Bears on Aug. 31 in Houchens-Smith Stadium.