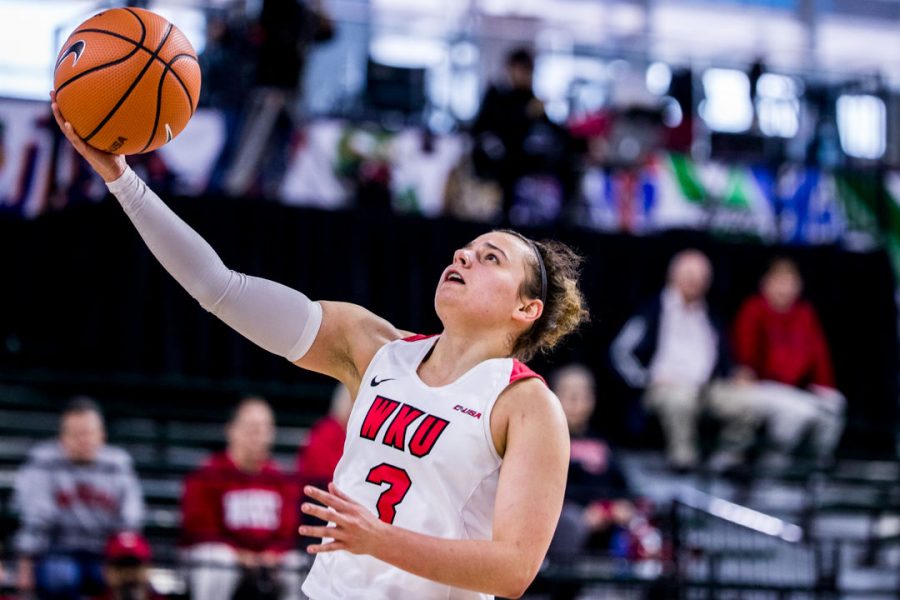 WKU guard Sidnee Bopp (3) goes up for two during the Lady Toppers' 78-50 win in the first game of the Conference USA tournament against Texas-San Antonio on March 8, 2018 at The Star in Frisco, Tx. Bopp scored nine points in the Lady Toppers' win.

Central Michigan’s campus was covered in snow, but it was raining inside McGuirk Arena.

A stellar offensive performance from CMU proved to be too much for the WKU women’s basketball team to overcome in a 108-90 loss Saturday afternoon.

The Chippewas (2-1) scored 38 points in the first quarter alone, defeating the Lady Toppers (0-4) by an 18-point margin thanks to a 64.4 field goal percentage and a 55.2 percentage from beyond the arc. CMU was only one bucket shy of the program’s single-game record for made 3-pointers, nailing 16 shots from deep.

The Lady Toppers were led by redshirt junior forward Dee Givens, who posted five rebounds and a career-high 23 points after setting her previous career-high with 21 points at Oklahoma last Saturday. Sophomore forward Raneem Elgedawy also had a big afternoon for WKU, adding a career-high 20 points and four rebounds.

Sophomore guard Sherry Porter got the start for the Lady Toppers in place of redshirt junior Alexis Brewer, but two early fouls kept Porter out of the game for most of the first half. Brewer took advantage of her minutes, sinking a trio of 3-pointers in the first quarter. Freshman guard Meral Abdelgawad also hit two 3-pointers in the opening period. Abdelgawad failed to score again for the remainder of the game, finishing with six points.

CMU answered WKU’s six 3-pointers in the first quarter with eight of its own. The Chippewas were scorching hot on offense, but their defensive effort was also on point. CMU translated five WKU turnovers into 11 points on the other end.

After being outscored in the first quarter 38-24, the Lady Toppers turned to their bench for assistance in the second period. The strategy paid off, as CMU only outscored WKU 22-21. 11 of WKU’s 21 points came from the bench, including senior forward Jae’Lisa Allen’s only four points of the contest.

Another key contributor off the bench was senior guard Sidnee Bopp. After playing only 23 minutes in WKU’s first three contests, Bopp notched 26 minutes against CMU. She sank a 3-pointer in the second quarter and finished the day with nine points.

The Lady Toppers went into halftime trailing the Chippewas 60-45. At the half, CMU boasted a 68.6 field goal percentage and 10 made 3-pointers. The Chippewas had four starters in double digits, including senior guard Presley Hudson, who posted a team-high 16 points.

Hudson finished the game with 34 points for CMU, which led all scorers.

Nine different Lady Toppers scored a basket in the first 20 minutes of play. Brewer came off the bench to lead WKU in points at the half with nine. WKU shot 50 percent both from the field and from distance, but eight turnovers proved costly. The Lady Toppers were also out-rebounded by CMU 17-13.

After third quarter struggles in each of the team’s first three contests, WKU outscored CMU 26-20 the first 10 minutes after halftime. Porter became the 10th different Lady Topper to score early in the third quarter, and nine points from Givens helped WKU trim the CMU lead from 15 to as low as seven. The Chippewas escaped a rocky third period still leading WKU 80-71.

CMU opened the fourth quarter with 3-pointers on its first two possessions, making both attempts. After only scoring four points in the entire first half, Elgedawy got going with 10 points in the fourth period. Givens also added seven points, but it was not enough, as the Lady Toppers were outscored 28-19 in the final quarter of play.

After posting their worst game of the season from the field during their last contest against No. 13 Iowa, the Lady Toppers achieved a 54.5 field goal percentage. WKU also notched its highest point total of the young season, adding 29 points from reserves.

However, WKU left nine points at the charity stripe, shooting 9-of-18 from the free-throw line. The Lady Toppers also allowed 27 assists on 38 buckets for the Chippewas.

WKU’s loss this afternoon kicked off a stretch of five games in eight days for the program. The Lady Toppers will meet up with Southern Illinois inside Diddle Arena next Tuesday at 11 a.m. Just two days later, WKU will be in Vancouver, Canada, to play No. 8 Oregon State at 10:30 p.m. WKU’s other two opponents in the Vancouver Showcase will be determined by game results.