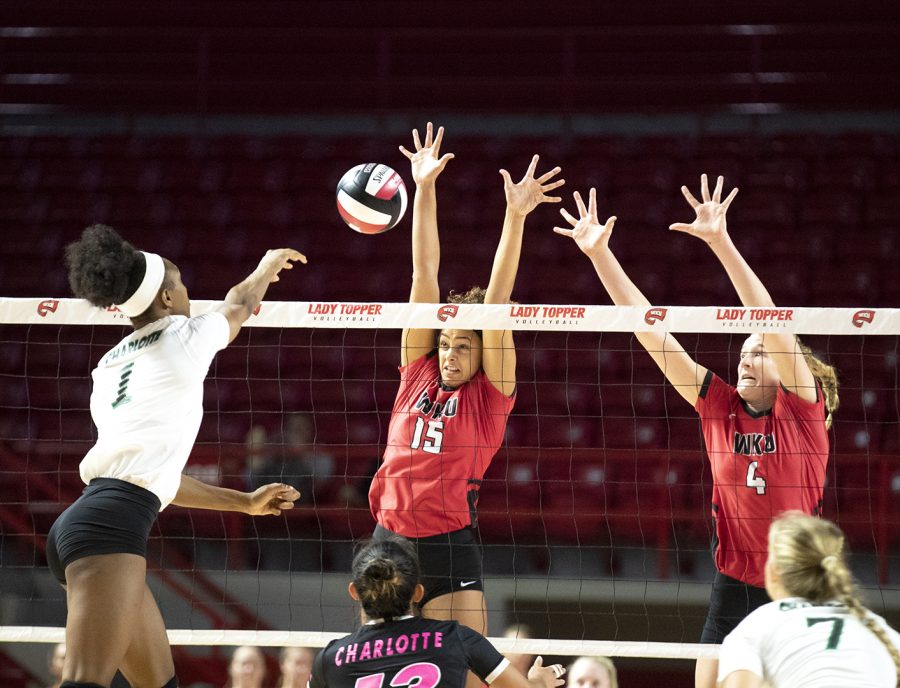 WKU's Kayland Jackson (15) and Rachel Anderson (4) go up to block during WKU's match against Charlotte at Diddle Arena on Sept. 23, 2018.

The Lady Toppers were able to pick up a pair of victories on the road after a rare home loss to remain near the top of Conference USA over the weekend.

WKU defeated both Marshall and Middle Tennessee State in four sets, moving to 14-6 (5-1 C-USA) on the season.

The young WKU squad is still figuring some things out as the team moves further into the conference schedule.

“We’re still trying to find that level of consistency,” head coach Travis Hudson said after the win against MTSU. “We played really well at times and really poorly at times, and that’s not a good way to approach a road match.”

Hudson said the team was fortunate to pick up a conference win.

“We played poorly in every phase of the game and will have to be much better moving forward on the road in C-USA matches,” Hudson said.

The Lady Toppers closed the weekend trip out with the second matchup of the year against the Blue Raiders. It was a 3-1 (25-21, 25-13, 20-25, 25-16) victory in Murfreesboro, Tennessee, for the Lady Toppers. In the victory, MTSU was able to grab a set from the Lady Toppers for the first time since the 2015 season.

Sophomore Kayland Jackson led the Lady Toppers for the second time this season with 11 kills.

“KJ’s playing on the right side for us now after playing on the left for most of the year, and she’s still trying to get a level of comfort over there,” Hudson said. “We’ve seen stretches of brilliance over there, and we’re thinking that is her long-term home.”

Three other WKU players finished with eight or more kills in the match. Anderson finished with nine while Cerino and Matthews each had eight.

Defensively, Frederick again led the Lady Toppers, finishing with 16 digs in the match, her 10th time leading the team in the category this season.

“We just continue to find a way to win; we certainly don’t feel like we’re playing very good volleyball right now,” Hudson said. “It seems like every season has a lull in the middle somewhere, and you just have to fight your way through it, and if you can win some matches on the road in Conference USA in the midst of that, then it’s something you feel pretty good about.”

The Lady Toppers will head back to Diddle Arena for a 6 p.m. match Friday against Alabama-Birmingham. The Blazers are 10-9 (2-3 C-USA).