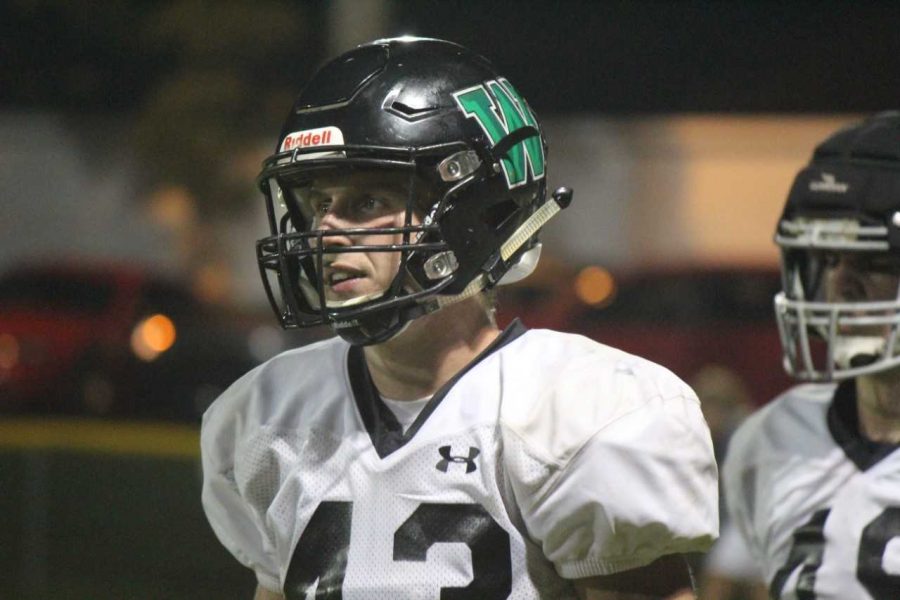 The scene at Bowling Green Christian Academy’s football practice was just like that of any other school in the country, or at the least those in the south. The sun slowly set across the road, but it didn’t matter because the lights quickly came on.

Country music played loudly from a speaker that was sitting behind a pickup truck parked perpendicular to the field. Eventually, between Kenny Chesney and Garth Brooks, there was a break in the music for a home security system advertisement, one that the players didn’t get to hear due to their head coach, Don Brown, using the time to chew out a player who ran the wrong direction on an end-around.

The scene at WKU’s intramural complex, where the Warriors practice, felt just like any other place, except for one detail: there were only 17 players at practice. The Warriors, Bowling Green’s smallest high school, play eight-man football in the Middle Tennessee Athletic Conference, a league full of small school teams from Tennessee.

Out of all the players on the field, one stood out. Senior Riley Davis is the team’s starting fullback, linebacker, kicker and punter. He is clearly the one of the best on the team and beloved by his teammates.

“He’s a beast,” Tanner Brown, the team’s starting quarterback, said during a water break before quickly moving back onto the field. “…Everything he does, 100 percent, every play we drew up. He doesn’t back off at any time.”

Davis has been with the team since its founding four years ago when he was a freshman. Back then he played center and, by his own admission, wasn’t very good. But he hung on and is one of only four original players still on the team, along with Brown, Cooper Guy and John Stock.

Before the scrimmage portion of practice, Davis got into a single file line with the rest of his teammates to take part in a tackling drill. A large donut shaped pad was rolled and players were tasked with form tackling it, wrapping it up with one arm going through the hole in the center.

Davis hit the donut harder than anyone else in the line, driving it 5 yards back. Not too shabby for someone who only began playing football four years ago.

“He shows up at practice and he never takes a play off and he’s always giving it his all, even when he’s doing his stretches,” Don Brown said. “He’s just full, completely in to it.”

Davis’ biggest problems early in his football career were mental.

“He used to get so anxious,” Don Brown said. “He wanted to be successful so badly that he would be too intense and then he would have some mental errors, but this last season he’s matured, and he has stayed composed and has been just a pleasure.”

The players moved into the scrimmage portion of practice, with those who were on defense slipping green mesh jerseys on top of the white ones they were already wearing.

Davis, whose jersey was more brown than white, came out of the backfield and went up the field seven yards, breaking towards the sideline. The quarterback threw him the ball, but it was knocked away from Davis by one of his defensive teammates.

“Attaway,” Davis grunted through his mouthpiece as he slapped the defender on the back, a strange reaction from a player who had been momentarily beaten.

“I congratulated him for making me better,” Davis said. “He’s giving his 100 percent and that’s making me work harder.”

The odd moment was one of many examples of Davis being the clear leader of the team. Another came at the end of the next practice.

After the main portion of practice ended, instead of doing sprints, the team all got into the plank position. Coach Brown pushed the team to their limit during the exercise, and by the end, most of the team was faltering, arching their backs or otherwise attempting to cheat the pain.

“I know as a team captain and as a senior, I’ve got to set a good example for my teammates,” Davis said. “If I start slacking off, they will too.”

Even off the field, Davis still leads his team. Brown spoke of the work that he put in to building the camaraderie on the small roster, pointing out that Davis won last season’s Warrior Award, the team’s highest honor for leadership.

“One thing he wanted to do more so than last year is really lead the charge to have a brotherhood,” Brown said. “We all talk about brotherhood, but he regularly gets together with guys on the team to hang out, so that’s really helped their rapport.”

“We did a lot of offseason leadership training,” Don Brown said. “We all read a book together and he naturally became one of the leaders.”

Davis said that he also does well in the classroom, although he admitted that sometimes it’s easier to put more effort into football. Outside of football, his biggest interests are fishing, hunting and other sports, but none compare to football, which he hopes to continue playing.

“I would love to play at the next level,” Davis said. “It would be a whole lot of fun. Something that I’ve been wanting to do since freshman year.”

Typically the best high school football players go on to play in college, but eight-man football is notorious for being difficult for even the best players to get exposure. Davis certainly wants to play in college and has garnered some interest from several small schools, including one with a great engineering program, Davis’ preferred major

“He doesn’t have a typical body type for any one position, but he’s certainly an athlete,” Don Brown said. “I think in the right place in the right position with the right system, he can be very successful.”

Brown said he believes that however the college situation shakes out, Davis will be just fine.

“He’ll be a leader in the community,” Brown said. “He’ll probably be head coach of Bowling Green Christian Academy.”