Whyte, Farris in their final stretch as teammates 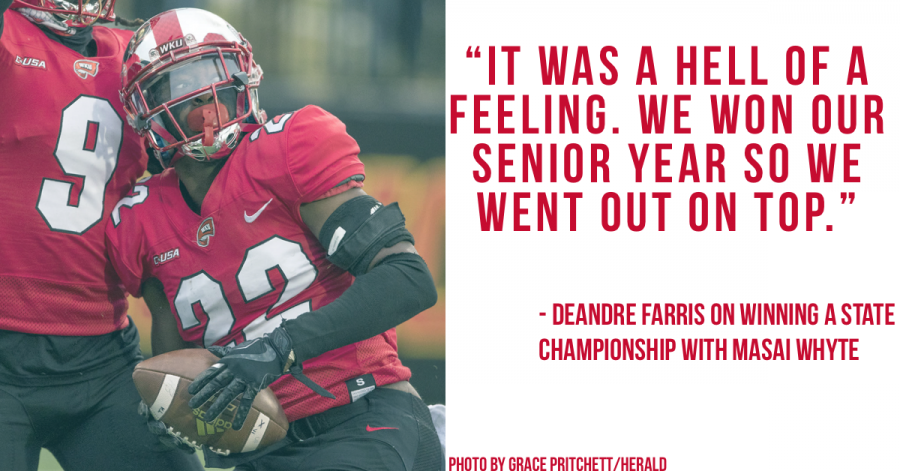 The five years redshirt seniors DeAndre Farris and Masai Whyte spent on the Hill together was nowhere near the start of their time as longtime teammates.

The two defensiive standouts starred together at Martha Layne Collins High School, where they won a state championship in 2013 after overcoming a blowout loss in the state title game the year before.

The Titans swore they would be back, and they made good on that promise the very next year. With a defense led by Whyte and Farris, who also played on offense, Collins returned to the state championship game, which was held at Houchens-Smith Stadium, and knocked off the defending champs 37-34.

“It was a hell of a feeling,” Farris said. “We won our senior year so we went out on top.”

Collins head coach Jerry Lucas said getting back to the state title game and winning was thanks in part to Whyte and Farris’ work ethic.

“The amount of extra work they put in always amazed our coaching staff,” Lucas said. “We got done with practice, Masai would be in the weight room lifting, and you’d look out the window, and Dre’s got the ladders, and he’s putting in another 45 minutes after practices working on his footwork, working on his speed.”

The two players both described their relationship, going back to high school and Shelby County Middle School before that, as being family rather than friends.

The two also agreed that winning the state championship was one of the best things they’ve experienced.

Whyte echoed Farris and mentioned the excitement of playing in their future home stadium.

“I feel like it was a good experience, just because we knew we were coming to this school,” Whyte said of the 2013 championship win. “Getting the win was big, and then just coming on and joining the team the next year was even better.”

“We both had our schools that were looking at us,” Farris said. “Once we found out that Western was recruiting us hard and found out that’s where we both wanted to go, we kind of made our decision together.”

When the two got to WKU, they arrived at the peak of WKU football in the Sanford era. Both players were on the teams that won back-to-back Conference USA titles. They also stuck around after Brohm left to take the head coaching position at Purdue, even though they had teammates who transferred.

“We were going to try to better our program,” Whyte said. “Our focus was to lead something new.”

The decision to stay was heavily impacted by WKU’s fans, and Farris gave credit to them sticking with the program.

“We have some of the best fans in the country,” Farris said. “This community is behind us, behind the team, so that’s something that we enjoy.”

Despite the Hilltoppers’ lack of success in the win column this season, both Farris and Whyte have stepped up their game. Farris has an interception and sits in seventh place on the team in tackles with 18 through six games, and he also has five pass breakups.

Whyte is tied for fourth on the team in tackles with 35 and also is tied for the team lead in sacks with two. He also has an interception. Both players have assumed leadership roles since the departure of Brohm, saying they learned to lead from former players Chris McNeil, TJ McCollum and Keith Brown.

“What I want to see from those guys is to keep the team on the right track mentally,” WKU defensive coordinator Clayton White said. “Those guys have the type of qualities where they can keep us on track.”

Both of the players said they would love to keep playing football at the next level, but they also both have backup plans. Farris wants to become a coach, while Whyte plans to go to work for his father.

Whatever they end up doing after graduation, their former coach thinks they will do fine.

“These are just two great kids,” Lucas said. “If you just spend any time with them at all, they’re just fantastic human beings. Those type of people—you just root for those type of people, and you just feel like they’re going to be successful.”