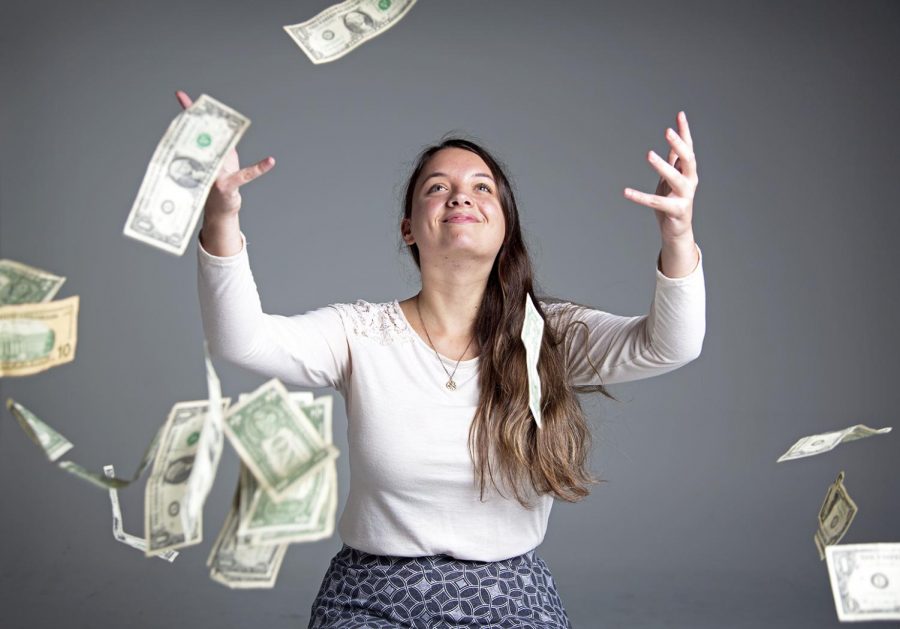 Rebecca Price, Sophmore, is excited for students to watch her upcoming appearance on Who Wants to Be a Millionaire."It was a bucket list item to be on the show. It was a life changing experience. I never thought I would be there in a million year," Price said.

While most students may spend the first day of their fall break sleeping or doing fall activities, Shepherdsville sophomore Rebecca Price will be watching herself on the hit ABC game show “Who Wants to Be a Millionaire?” on Thursday at noon.

A dedicated fan since third grade, Price said her love of game shows began at her grandma’s house, where “Who Wants to Be a Millionaire?” “The Price is Right” and “Let’s Make a Deal” were afternoon staples.

“Growing up, my grandma only had, like, three channels on her TV and that was one of them,” Price said about “Who Wants to Be a Millionaire?” “I’ve watched it forever.”

After many years of devoted viewing, Price said competing on a game show became a personal goal—one she never dreamed would come true.

“I don’t really have a bucket list, but that would be, like, the number one item on it for me,” Price said. “I never thought that would happen.”

Having spent the first month of summer watching game shows and working as a camp counselor at the Kentucky Science Center in Louisville, Price said she returned one night from work in early June to an application for “Who Wants to Be a Millionaire?” her family opened online for her. Price said her family’s encouragement was the push she needed.

Three days after submitting the application, Price was contacted by producers from “Who Wants to Be a Millionaire?” to schedule an interview. By mid-July, Price was flying out to Las Vegas to begin shooting, during which she said she kept a list of the names of every U.S. president, first lady and vice president to study in preparation for the show.

With sports, current events and politics serving as her self-proclaimed weakest areas of trivia, Price said she prepared for the show by watching its reruns on YouTube. Price said the questions are unpredictable.

A show that offers its contestants a chance to win $1 million by answering 14 questions of varying difficulty correctly, “Who Wants to Be a Millionaire?” has the potential to change a winner’s life. However, Price said she was more interested in having the opportunity to play trivia on national TV.

“Until I got to Vegas, I didn’t even think about the money aspect,” Price said. “I was just like, ‘Let’s go play some trivia on TV.’”

After meeting with fellow contestants and the show’s producers for 13 hours set the day before her episode’s recording, Price said she was ready for her turn to try and win the $1 million prize. She said her experience on set was unlike anything else.

“It’s just surreal, being on the stage,” Price said. “It just means the world to me that I was even able to have this opportunity.”

Price’s roommate, Owensboro sophomore Kate Bowley, traveled to Las Vegas with Price and served as her plus-one on the show, meaning she would be able to help Price solve a question of Price’s choice during her run if needed. Bowley said she believed she and Price stood out among the other contestants and Las Vegas crowd because of their age.

Despite that, Bowley said Price was “in her happy place” while on set, speaking to a number of other trivia enthusiasts.

“I’m really proud of her for putting herself out there,” Bowley said. “It was a really big step for her.”

Louisville sophomore Emily Jacobson has known Price and Bowley since last year. She said it’s just like Price to compete on a game show.

“I think it really speaks to who she is,” Jacobson said. “She just loves random facts.”

When she’s not playing the HQ Trivia app on her phone or watching previously aired episodes of “Who Wants to Be a Millionaire?” or “Jeopardy!,” Jacobson said Price likes cooking and hanging out. Though Price’s friends know she loves trivia, Jacobson said they know her best as someone who’s always willing to be herself and support others.

“Rebecca’s a very individual person,” Jacobson said. “She’s like family to me.”

Price said she’s stuck with watching “Who Wants to Be a Millionaire?” for so many years because she loves its universal appeal. From 80-year-olds to college students, Price said she believes the show has something to offer every viewer.

“People from all walks of life watch the show,” Price said. “It’s for everybody.”

Now that she’s competed on the show, Price said she’s fortunate to have gotten the chance. She encourages anyone else who’d like to compete on a game show to just take the time to apply.

“I would have never dreamed of applying if that one day I just hadn’t had the thought and the time to go through that application,” Price said. “They could’ve picked anybody, and I’m just so lucky that it was me.”