‘Bridgerton’ Renewed for Seasons 3 and 4 at Netflix, Ahead of Season 2 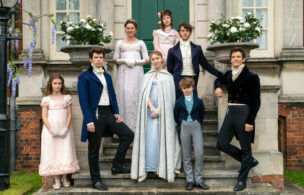 ‘Bridgerton’ Renewed for Seasons 3 and 4 at Netflix, Ahead of Season 2

You don’t want to miss the latest from Lady Whistledown’s society papers, dearest readers. Bridgerton has been renewed for two more seasons!

“Esteemed members of the Ton,” the announcement from the columnist reads. “It seems we have a rather special announcement. Bridgerton shall return for seasons three and four. This author shall have to purchase more ink…” This news comes before the second season has even premiered. Season 2 is, however, in production, so fans can rest easy knowing that sooner rather than later, they’ll be able to follow Lord Anthony Bridgerton’s (Jonathan Bailey) quest for love, as covered in the second of Julia Quinn’s novels, The Viscount Who Loved Me.

There are eight novels in Quinn’s series, each following one of the Bridgerton siblings in the sexy, lavish, and competitive world of Regency London high society. The first season of the Netflix series followed Daphne’s (Phoebe Dynevor) search for love; she married the Duke of Hastings (Regé-Jean Page, who will not be back for Season 2). Quinn’s third book follows Benedict (Luke Thompson), while the fourth is about Colin (Luke Newton) and his best friend Penelope Featherington (Nicola Coughlan), who was revealed to be behind Lady Whistledown (voiced by Julie Andrews) in the Season 1 finale.

“From the first time I read Julia Quinn’s delicious Bridgerton series, I knew these were stories that would captivate a viewing audience,” executive producer Shonda Rhimes said in a statement. “But the evolution of this adaptation would not be a success without the many significant contributions of the entire Shondaland team. This two-season pickup is a strong vote of confidence in our work and I feel incredibly grateful to have partners as collaborative and creative as Netflix. Betsy and I are thrilled to have the opportunity to continue bringing the world of Bridgerton to a worldwide audience.” “Bridgerton swept us off our feet. The creative team, led by Shonda, knew the material and delivered a beautiful, emotional, romantic drama for our members,” Bela Bajaria, VP, Global TV at Netflix added. “They have some exciting plans for the future, and we think audiences will continue to swoon for this show. We’re planning to be in the Bridgerton business for a long time to come.”