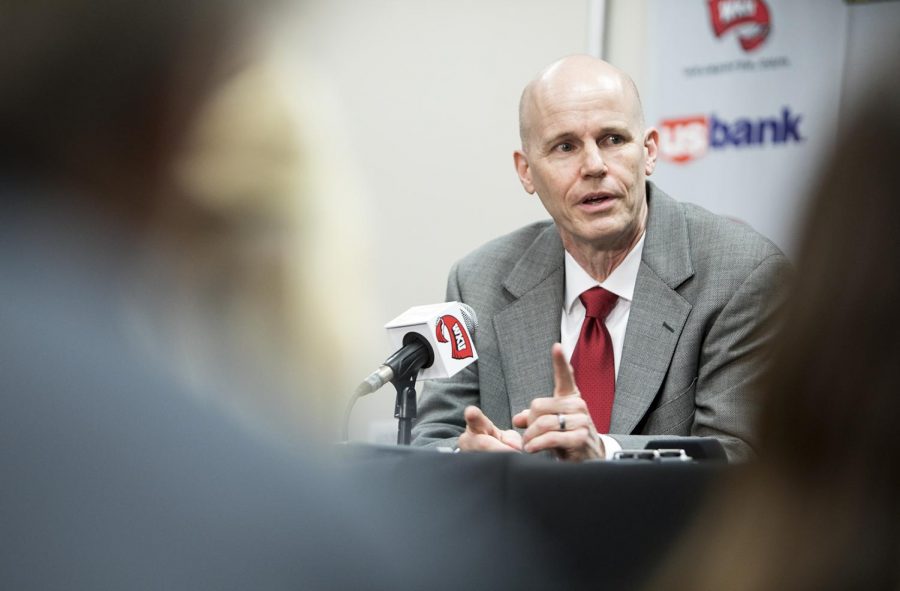 Greg Collins addresses the media during a press conference where he was announced as the new head coach of the WKU women's basketball team on April 4 in Diddle Arena. The announcement of Collins as head coach came shortly after Michelle Clark-Heard announced she would be leaving WKU to coach the Cincinnati Bearcats women's team.

WKU women’s basketball has been picked to finish fourth in Conference USA by the annual preseason C-USA coaches’ poll.

The poll, which was released Wednesday afternoon, pegged 2017-18 regular season champion Alabama-Birmingham as the favorite to win the conference again.

The Lady Toppers, a program which has claimed the last two C-USA Tournament Championships and been to the NCAA Tournament four times in the past six years, received no first-place votes.

The team will have to replace a lot of key contributors this season, starting with former head coach Michelle Clark-Heard. Clark-Heard has been replaced by first-year head coach Greg Collins, who served six years as an assistant and associate head coach under Clark-Heard. Collins will look to improve on last season’s 24-9 mark.

The preseason all-conference team was also announced, and it included no Lady Toppers. WKU’s two All-Conference representatives from last season, seniors Tashia and Ivy Brown, are both no longer with the program.

Though Collins has been tasked with replacing two of the program’s all-time great players, the cupboard is not bare. WKU women’s basketball returns forwards Raneem Elgedawy and Dee Givens, the reigning C-USA Freshman and Sixth Player of the Year, respectively.

Elgedawy started all 33 games as a freshman, averaging nine points and 7.1 rebounds per contest. During a Jan. 11 game against Florida International, she grabbed 23 rebounds, which was the highest number recorded by any Division I freshman in a game since 2015-16.

Givens was a steady presence on the Lady Toppers’ bench last season, averaging 8.8 points and 4.1 rebounds per game. Givens averaged an additional 2.8 PPG against Power 5 opponents, which she will aim to continue in the team’s five matchups with Power 5 schools this season.

The program will welcome several new players to the Hill, including forward Jae’Lisa Allen, a graduate transfer from Virginia. Alexis Brewer and Arame Niang, who both sat out last season to satisfy NCAA transfer rules, will also be eligible.

Freshmen Myriah Noodel-Haywood, Kallie Searcy and Meral Abdelgawad round out the new roster additions. Sandra Skinner, a transfer from VCU, will also be part of the program, but she must sit out according to NCAA transfer regulations.

The Lady Toppers will be in action for the first time at Hilltopper Hysteria on Thursday. The team will then play West Virginia State in an exhibition on Nov. 1 before tipping off the regular season against in-state rival Louisville in Diddle Arena on Nov. 6.