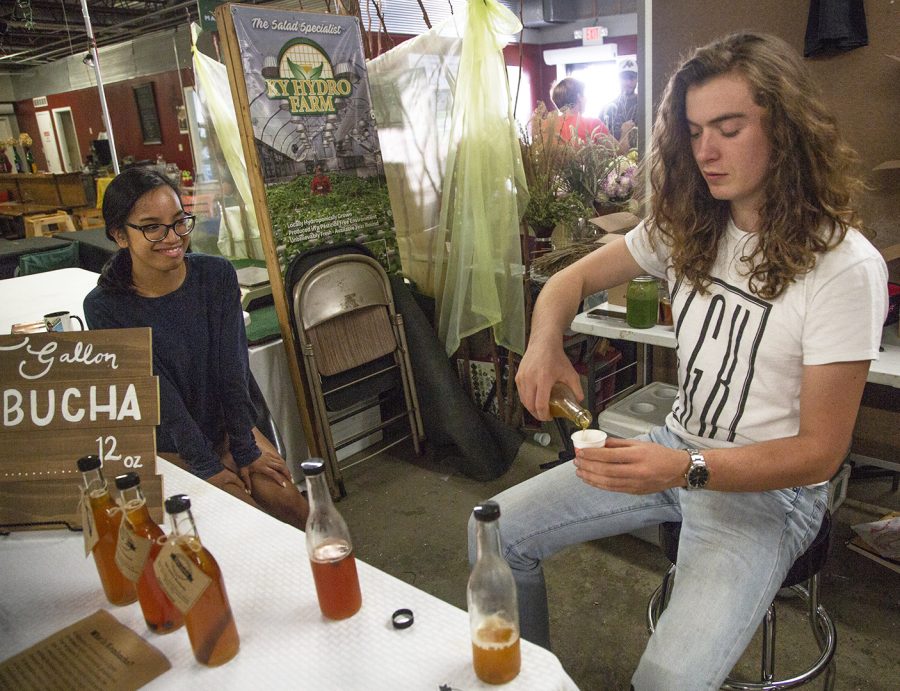 Gavin Moore, and business partner David Mann, set up shop almost every Saturday at the South Campus farmer's market in Bowling Green. Gavin hopes that he and his business partner's business can promote good diet habits for locals and students. "Business picks up during the fall season, we also get big draws during festivals in the surrounding areas. Our drink helps promote the growth of the probiotics in your immense system, Mann said.

While many students are cramming for their midterms, Gavin Moore and David Mann have something else brewing—or rather, fermenting.

Mann and Moore own The Fifth Gallon, a local kombucha business. Kombucha is a beverage made by fermenting black tea with something called “SCOBY,” a symbiotic culture of bacteria and yeast.

Mann said the idea for The Fifth Gallon began during his junior year of high school, when his health-oriented mother started making her own kombucha following the spike in store prices.

“It became a running joke between me and Gavin to start a kombucha company,” said Moore, a business major and Bowling Green native. “After about a year of joking, I was bored one day and thought, ‘well, how much would it cost if we were to start it?’”

We’re rapping up the strawberry lemon season in a bit. If you’re one of the millions, possibly billions of people who love this flavor you best get it soon! . . . #kombucha #localbusiness #strawberry #lemon #photography

Moore said the process is similar to the process for making sourdough bread and includes culturing and fermenting before adding the SCOBY.

Moore said the SCOBY resembles a “jellyfish pancake,” and it serves to turn the tea into “almost vinegar.” The nine-to-10-day fermentation process cuts the beverage just short of vinegar, and the bottling and sealing that follows naturally carbonates the kombucha.

Kombucha proponents claim the tea helps prevent and manage serious health conditions, though Mayo Clinic says these claims are not backed by science. It has been suggested the probiotics in kombucha aid digestion.

After some initial calculations, Mann and Moore had the shell of a business idea, but they learned a lot along the way about the real effort and resources they’d need.

“It takes a lot more time and dedication to make a business than you will ever expect,” Mann said. “We were given generous leeway in terms of financial [investment] and time to make the company, and the reality still superseded that expectation by a long shot.”

He said when building a business, it’s important to be prepared to spend more than you plan for because of all the potential obstacles.

In the beginning, The Fifth Gallon operated out of a small apartment in the back of a garage, but the business has since relocated to the Zest commercial kitchen in Plano during its legitimization process in late 2016. The company also applied for permits and license at the time, allowing it to expand its sales to local retail locations, including Vertical Excape, Zest Juice Co., Rian’s Fatted Calf Meat Shoppe and the Community Farmers Market near the Knicely Center at South Campus.

Mann and Moore use many of the same methods for making their kombucha that Mann’s mother does for hers.

“We modified [the recipe] a little bit, but basically the recipe and even the SCOBYs themselves are the same,” Mann said. “She would make them in gallon pickle jars, and so do we. A lot of that same tradition I get from my mother.”

The business name is also an allusion to Mann’s mother and her kombucha. Moore said his mother made about four gallons of kombucha per week, so when he and Mann began making kombucha, theirs was the fifth gallon.

In the years since its founding—Moore and Mann started kombucha production at ages 17 and 18, when they were still in high school—business has steadied, and The Fifth Gallon now turns out about 20 gallons of kombucha per week to sell locally, although production fluctuates with the seasons and declines during the school year.

So naturally I get asked hundreds of times every day, on the streets, “David, As we all know, kombucha and sandwiches are a match made in eharmony. Where can I buy a sandwich and a kombucha at the same time?” To which I naturally reply, “Effectively worded inquiry fellow human. Allow me to direct you to Roam sandwich shop. An absolutely dope downtown shop that has awesome food and, obviously, great drinks.” . . . #roamsandwichcompany #kombucha #fifthgallonkombucha #smallbusiness #sandwich #localbusiness

Mann said he and Moore are considering selling their kombucha on campus as a goal for future expansion but that there are a lot of “hoops and ladders” to get through in order to make that happen. For now, the plan is to continue making kombucha and selling it at The Fifth Gallon’s distribution locations within Bowling Green.

“Our business model from basically the very start was trying to not only get people on the health wagon, but also trying to get people kombucha cheap,” Mann said. “Our main goal is trying to make it more accessible of a drink.”

Editors note: a previous version of this story introduced the owners as Gavin Mann and David Moore. The Fifth Gallon owners are Gavin Moore and David Mann. The story has been updated with the correction and the Herald regrets this error.