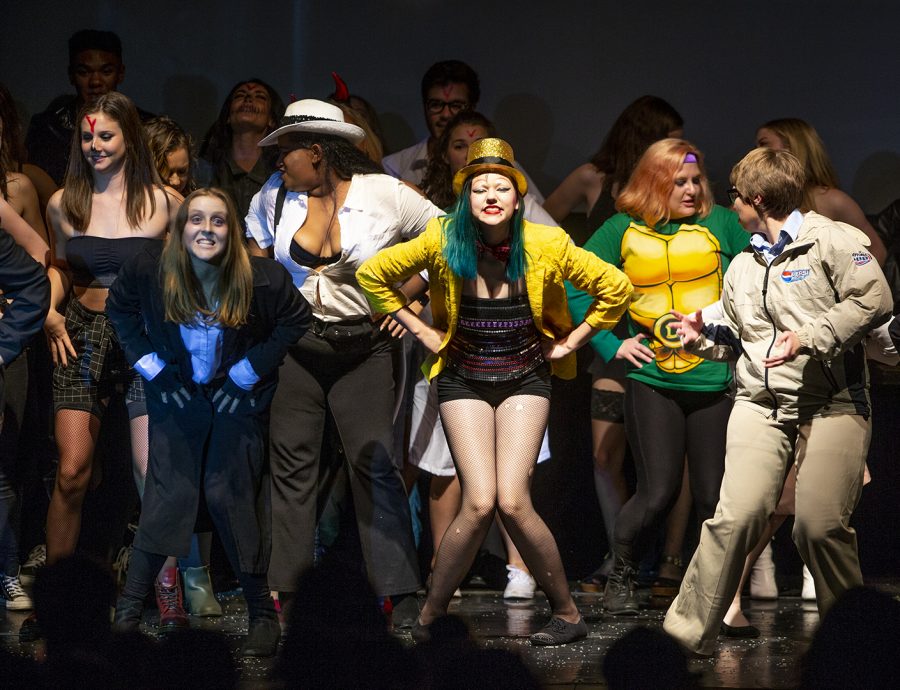 Cast and patrons take the stage to dance the "time warp" during CAB's annual Rocky Horror performance at the Capitol Arts Center on Oct. 31

Halloween is Wednesday. If trick-or-treating isn’t your dig, the Capitol Arts Center in downtown Bowling Green will feature its annual performance of “The Rocky Horror Picture Show” Wednesday from 10 p.m. to midnight.

Sponsored by the WKU Campus Activities Board, the performance brings to life the 1975 cult classic through shadow actors, who perform the movie simultaneously as it’s played on a screen located behind them.

Nashville freshman Casey Hanrahan is directing the production. She said she believes it will be “more than just going to watch a movie or going to see a show” through its spontaneous nature.

“It’s a wild and crazy time, and people who love it love it because of that,” Hanrahan said. “I think it’s really important to keep it fun.”

Hanrahan said she and the show’s cast have been preparing for the show nearly every day since the end of fall break. Though the performance follows the trajectory of the film almost to a T, she said this year’s rendition will feature a number of new twists and turns.

“There’s more to it now, and I think there’s still surprises for everyone,” Hanrahan said.

Louisville sophomore Leah Johnson will perform as Rocky, the gold spandex-wearing creation of the depraved transvestite mad scientist Dr. Frank-N-Furter, in the upcoming show. Though this is her first year performing in “Rocky Horror,” Johnson said she saw the production last year, which motivated her to audition.

Johnson is a performing arts major and said she is used to acting in shows of all kinds. But she said she’s never encountered a show as interactive as “Rocky Horror,” which involves its audience members by welcoming them to admission-included gag bags before the show and to join the fun onstage during the show’s highly anticipated “The Time Warp” dance.

“While I love theatre and everything and being in real shows,” Johnson said. “For ‘Rocky Horror,’ this is like a cult … This is a different kind of audience.”

Johnson said she believes the show’s emphasis on fun and interactivity makes for a more comfortable acting experience.

“It’s definitely more free,” Johnson said. “If I were to mess up, it literally doesn’t matter because it’s still funny, and it’s still fun.”

A “Rocky Horror” veteran, Fort Wright senior Rachel Peavler will perform in the show for a third time this Halloween. This year she will perform as one of the film’s central characters, Brad.

Though Peavler is a communication disorders major, she said she performed in theatre throughout high school, which encouraged her to audition for the show after seeing a CAB poster endorsing it during her freshman year. She said the show helps her express a creative side she typically conceals.

“I take every opportunity to perform that I can,” Peavler said. “You’ve got to fulfill that part somehow.”

After experiencing the show in Bowling Green twice already, Peavler said it’s noteworthy for the hectic, loud and projectile—yes, audience members are encouraged to throw various gag bag items onstage throughout the performance—atmosphere it provokes.

“It’s just electrifying the night of,” Peavler said. “It’s such an incredible experience for the actors and the audience.”

Tickets to the show cost $9 and can be bought online at the Capitol Arts Center’s website or at the center directly before the show. Costumes of all kinds are encouraged.