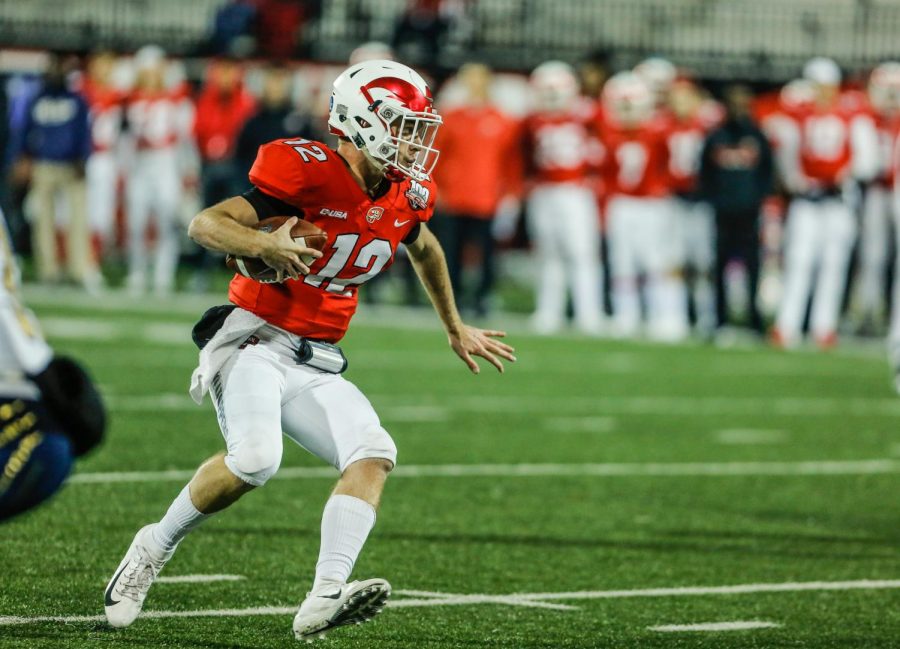 Redshirt freshman quarterback Davis Shanley (12) makes a run to the right side of the field during WKU's Homecoming football game against Florida International on Oct. 27 at Houchens-Smith Stadium. The Hilltoppers lost 38-17.

WKU continued a tumultous season with a 38-17 loss to Florida International Saturday, ending the Hilltoppers’ chance at bowl eligibility.

“There’s actually three options on it,” Sanford said of the fake attempt. “I think there was at least two of them were open so it kind of sums up the night a little bit.”

FIU took an early lead on the next drive, one that the Hilltoppers had a chance to stop early on fourth down. The Panthers converted and later scored with a 6-yard touchdown pass from redshirt junior quarterback James Morgan to redshirt junior wide receiver Maurice Alexander. That gave FIU a 7-0 lead.

The two teams failed to score on their next drives.

The Hilltoppers took the ball back and went on a long drive down to the FIU 5-yard line, aided by long runs by Samuel and freshman running back Garland LaFrance. The drive turned out unsuccessful when redshirt junior kicker Alex Rinella missed the field goal, clanking the ball off the right upright.

Later in the second quarter, after a shanked punt by Rinella gave the Panthers excellent field position, FIU was able to capitalize on a 5-yard touchdown pass from James to sophomore wide receiver Bryce Singleton. That gave FIU a 14-0 lead

WKU was finally able to score with 20 seconds left in the half on a Rinella field goal from 23 yards out. FIU took a 14-3 lead into halftime.

The Panthers came out of the locker room for the second half, scoring quickly after a 52-yard pass from Morgan to redshirt junior receiver Austin Maloney set up a 6-yard touchdown run by sophomore running back D’Vonte Price. That gave FIU a 21-3 lead.

Towards the end of the third, the Hilltoppers looked to have got a stop on defense before a roughing the kicker penalty set up the Panthers for another Morgan-to-Maloney touchdown pass to make the score 28-3 going into the fourth.

WKU finally scored a touchdown in the fourth quarter. Redshirt freshman quarterback Davis Shanley left the game after being the victim of a targeting hit, and redshirt sophomore Steven Duncan took his place to run the ball in from the 1 to make the score 28-9. A failed two-point conversion kept the score there.

Late in the game, the Hilltoppers added another touchdown to the score, with redshirt senior running back D’Andre Ferby running the ball in from the 1-yard line. Duncan passed to redshirt sophomore tight end Kyle Fourtenbary for the two-point conversion to make the score 31-17 with 1:55 remaining.

FIU struck back on a 58-yard touchdown run by Price on the next drive and then forced a turnover on defense to make the final score 38-17, dropping the Hilltoppers to 1-7 (0-4 Conference USA).

“We’re going to try to get better and try to get out of this rut we’re in,” senior linebacker Ben Holt said after the game. “You guys should still believe in us.”

Holt tied a WKU FBS record with 19 total tackles in the game, matching a single-game high that was previously posted by Andrew Jackson against Florida Atlantic in 2012.

WKU will be back in action at 7 p.m. Friday night at Middle Tennessee State.