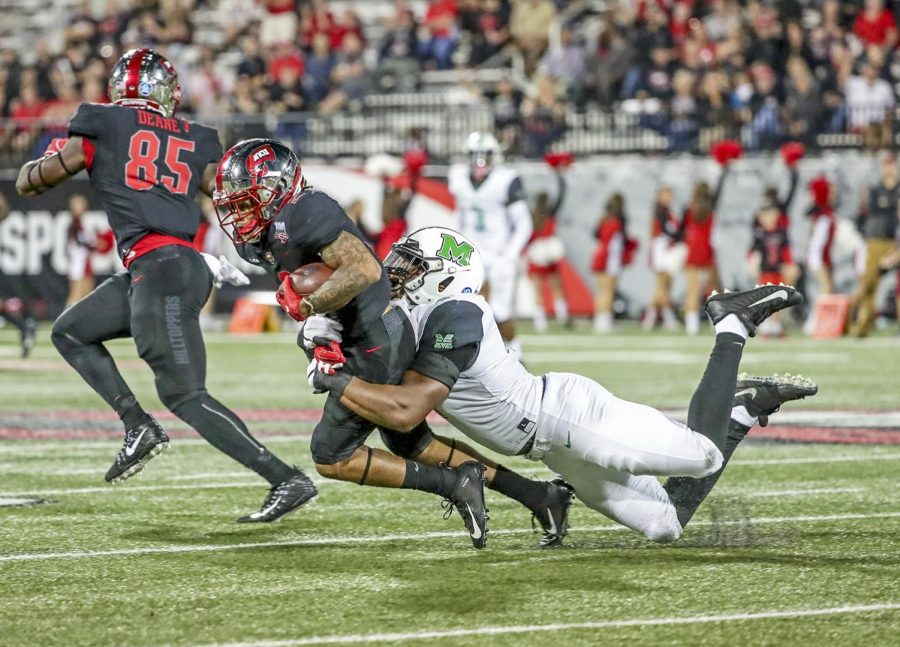 Coming off the bye week, the 1-4 WKU football team will look to get its season back on track against an almost equally woeful 2-3 Charlotte team on the road.

The Hilltoppers currently sit sixth in the Conference USA East Division, but with only one conference game having been played, a loss to Marshall, WKU still has a chance to make up ground. Especially with some other conference favorites taking losses early in the season.

The Charlotte offense ranks in the bottom 20 in sacks allowed but Sayner said that the team is better than statistics show.

“They got big number 64,” Sayner said, referring to Charlotte’s Nate Davis. “He’s an NFL guy so they’ve got talent up front. They’ve just been having—he’s been out the first four games. They call him the smart guy of the group so they’ll be ready for us.”

WKU head coach Mike Sanford has still not named a starting quarterback for the game, with redshirt freshman Davis Shanley and redshirt sophomore Steven Duncan being the top two options. Freshman Kevaris Thomas is listed below those two on the depth chart.

“It needs to be really important for us to get the continuity at the position,” Sanford said. “We’re going to go in to this week continuing to find out exactly where we’re going to be from a quarterback position and wanting continuity and wanting to make sure that we’re not in the situations again where we have different quarterbacks playing at the end of the game.”

Redshirt senior tight end Mik’Quan Deane has been a major target in the passing game this year, but has had different levels of production with quarterback changes this year.

“I know with Drew and Shanley that I’m going to kind of get quicker balls,” Deane said. “Like short routes. With me and Duncan it’s kind of different. I know that he’s going to definitely be looking at me for deep routes.

Deane’s connection with Duncan is well documented, he has caught all of his team-leading three touchdowns this season from Duncan and has proven to be a consistent red zone threat as well.

Both Sayner and Deane felt that the bye week did the team good.

“It was good to get off our feet,” Sayner said. “Coach took care of us so we’re feeling fresh going in to this week.”

Sayner also spoke of his excitement to get out and play after a disappointing finish against Marshall before the bye.

“We’ve got a bad taste in our mouth after getting a loss,” Sayner said. “We’re ready to get back out there and try to make that right.”

The focus on the bye week was taking development one day at a time, Deane said.

“Every rep, you know, just focus on, control what you can control, you know,” Deane said. “Just try to focus on what you can do to improve every day and just go out there and play hard Saturday.”

Kickoff for the game at Charlotte will be 2:30 p.m. on Saturday. The game will be available to stream through ESPN+.