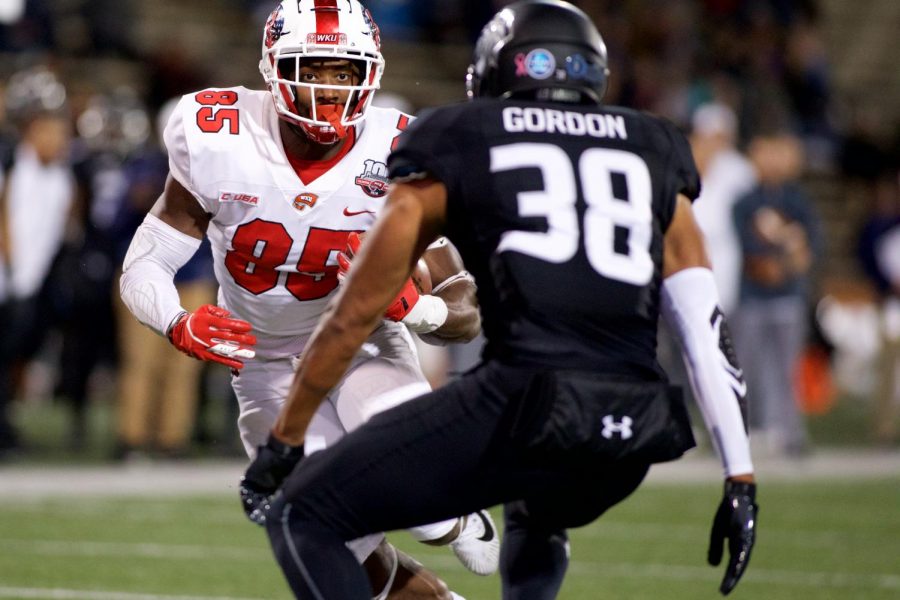 Mik'Quan Deane (85) turns the ball up field for WKU against Old Dominion at Houchens-Smith Stadium on Oct. 20 in Bowling Green. The Hilltoppers lost to ODU 37-34

WKU football was a minute-and-a-half away from its first Conference USA win against Old Dominion Saturday.

The WKU offense marched the ball 80 yards down the field and put up a touchdown on a 9-yard touchdown pass from Shanley to Deane to open the scoring in the first quarter. It was the longest game-opening touchdown drive for WKU under head coach Mike Sanford.

The Monarchs answered right back with a 72-yard touchdown drive of their own. It was capped off with a 1-yard run by redshirt junior running back Kesean Strong to level the score at 7-7 with 5:59 left in the first quarter.

ODU scored again on its next drive, as the Monarchs went 81 yards and again ended with a 1-yard run, this time coming from freshman Will Knight. ODU ended the first quarter with a 14-7 lead.

The two sides traded field goals of over 40 yards, as ODU sophomore kicker Nick Rice hit a 45-yarder to give the Monarchs a 17-14 lead before redshirt junior kicker Alex Rinella hit a 41-yarder to tie the game again.

ODU fumbled at the WKU 29-yard line following Rinella’s game-tying field goal, and a recovery by redshirt senior linebacker Eli Brown set up a 71-yard touchdown drive that gave WKU the lead going into halftime. Shanley found redshirt sophomore tight end Kyle Fourtenbary in the back of the end zone from 15 yards out to cap off the drive.

The scoring in the second half was opened by a WKU safety after redshirt sophomore offensive lineman Jordan Meredith was called for holding in the Hilltoppers’ own end zone. That cut WKU’s lead to 24-19.

WKU put up three points on a 33-yard field goal from Rinella on the Hilltoppers’ next drive. The score held at 27-19 going into the fourth quarter.

ODU managed to put up the needed eight points on a touchdown drive that was highlighted by a 44-yard catch and run by redshirt senior wide receiver Isaiah Harper.

WKU answered by putting together a 10-play, 80-yard drive in which Samuel and Appleberry combined for nine carries, including a 2-yard touchdown run from Appleberry, to take the lead back once again 34-27.

ODU got the ball back at its own 21, needing to go 79 yards with 1:32 left in the game and one timeout left to force overtime. The Monarchs did just that, scoring a touchdown to tie the game at 34 with a 6-yard pass from junior quarterback Blake LaRussa to senior wide receiver Travis Fulgham with nine seconds left.

WKU took over at its own 30-yard line, and overtime seemed imminent. But a roughing the passer call on ODU at WKU’s 45 pushed the Hilltoppers all the way to the Monarchs’ 40 and gave WKU an untimed down with the clock at zero. Sanford brought on Rinella to attempt a game-winning 57-yard field goal that landed well short, but an illegal substitution penalty on the Monarchs gave WKU another chance at an untimed down.

Rinella attempted another game-winner, this time from 52 yards. It was short again, and this time ODU put Harper back deep to return. Harper brought the ball all the way back to the WKU 17 before he was pushed out of bounds. WKU was called for a facemask during the return, which gave Old Dominion an untimed down and allowed Rice to kick a 26-yard field goal that won the Monarchs the game in bizarre fashion, 37-34.

“I believe the returner stepped out of bounds,” Sanford said of the missed field goal return. “Maybe somewhere between 6 and 12 yards short of where the final spot was, and it was actually before the facemask. So I think that needs to be looked at. I was asking for it to be looked at on the field, and they blew it off.”

WKU is back in action against Florida International next week, as the Hilltoppers will look for their first C-USA win again when they host the Golden Panthers for Homecoming.