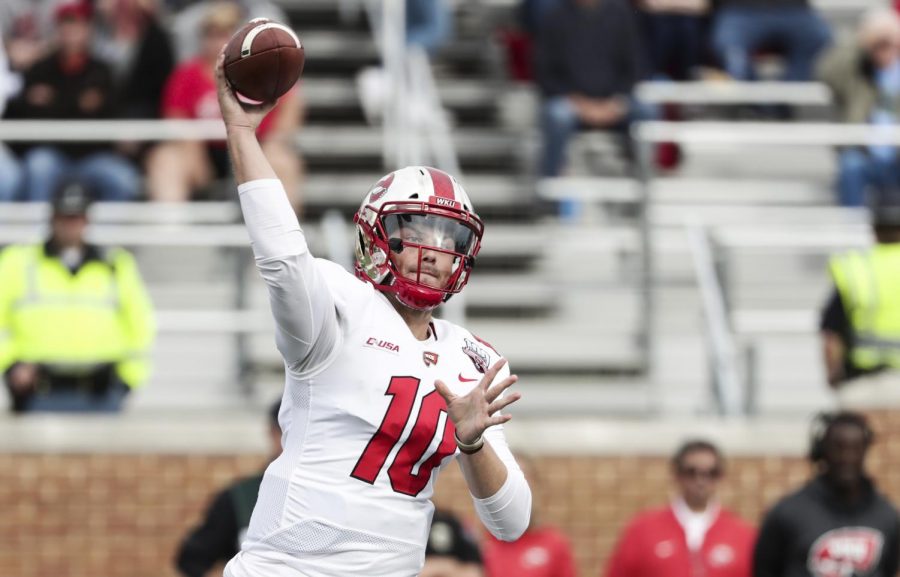 Steven Duncan throws a pass in WKU's game against Ball State on Saturday. The Hilltopper quarterback had 94 passing yards and 55 rushing yards in the 28-20 win.

A lackadaisical offense and a porous defense were WKU’s downfall in its 40-14 loss to Charlotte Saturday.

Redshirt freshman quarterback Davis Shanley got the start at quarterback for the Hilltoppers, after redshirt sophomore Steven Duncan started the last two games.

Shanley threw an interception on the first possession, a mistake Charlotte made the Hilltoppers pay for on a 35-yard touchdown run by junior running back Benny LeMay. The 49ers missed the extra point but held a 6-0 lead.

After the two teams exchanged punts, the Hilltoppers took the ball on an extended drive, anchored by a long pass from Shanley to sophomore wide receiver Jacquez Sloan. WKU capped off the drive with a 4-yard touchdown run by freshman quarterback Kevaris Thomas in his second appearance of the season.

Charlotte was able to take the next drive to near midfield,before sophomore defensive back Antwon Kincade forced a fumble that WKU came up with to take possession just before the end of the first quarter. On the ensuing WKU drive, the Hilltoppers were hurt by a holding penalty and were forced to punt the ball.

Late in the half, WKU took the ball down to Charlotte’s 28-yard line before a sack stymied their momentum. Senior kicker Alex Rinella missed a 51-yard field goal.

Charlotte got the ball back at its own 33 with 45 seconds left in the first half and drove down to the WKU 16. The 49ers were unable to capitalize as Cruz missed a 33-yard field goal as the half expired.

Charlotte received the kickoff to begin the second half and took the ball down the field for a touchdown on a 1-yard run by backup quarterback Evan Shirreffs.

Following a quick punt by WKU, the 49ers took the ball back and went nine plays for 62 yards, capped off by a 9-yard touchdown run by LeMay.

Things went from bad to worse on the ensuing drive for WKU, as Shanley threw a quick interception and redshirt sophomore running back Aaron McAllister scored from 24 yards out to give the 49ers a 30-7 lead.

With WKU’s offense going completely stagnant, the 49ers added a Cruz field goal and then, after a WKU fumble, a 28-yard touchdown pass from Shirreffs to freshman wide receiver Rico Arnold, giving Charlotte a 40-7 lead with 5:08 left in the game.

The Hilltoppers were finally able to score again late in the fourth when redshirt sophomore Steven Duncan threw a 7-yard touchdown pass to sophomore tight end Steven Witchoskey to make it 40-14, which was the final score. That was Witchoskey’s first career touchdown reception.

WKU falls to 1-5, and will be back in action at 6:30 p.m. on Saturday against Old Dominion in Houchens-Smith Stadium.