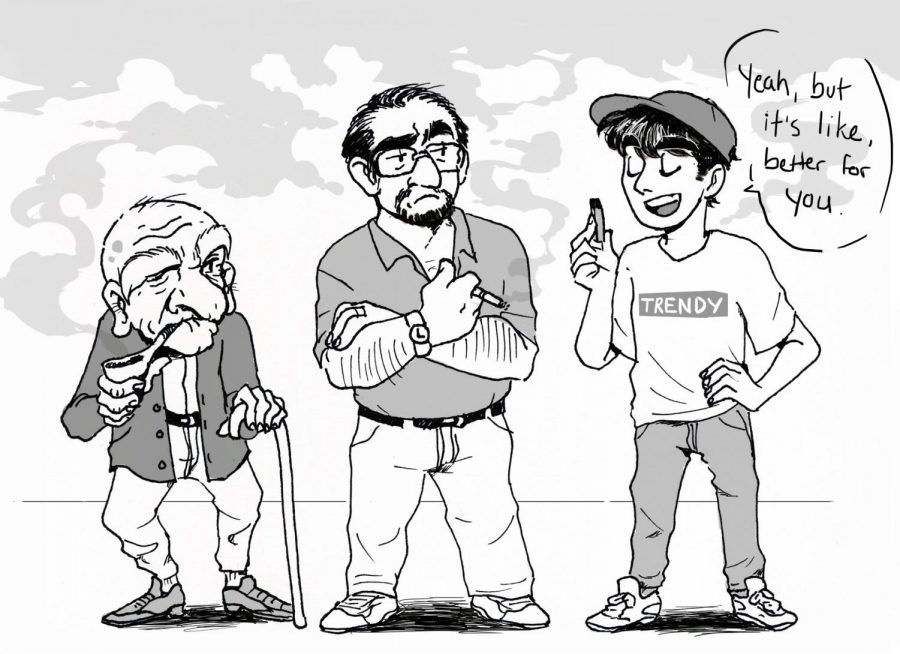 The JUUL hit the market a few years ago and gained popularity among young people rapidly. Like other e-cigarettes, the JUUL was created to help tobacco users cut back in a safer way. These devices have been somewhat controversial, however. Teenagers and young adults are using these products and developing nicotine addictions they never had to begin with.

Its use among young people has reached what the Food and Drug Administration is now referring to as “an epidemic proportion.” The FDA issued a warning to the company in early September that it has 60 days to prove it can keep its product away from minors, following accusations that JUUL has been targeting young people too heavily.

WKU has implemented a plan to make campus virtually smoke and vapor free by narrowing down designated smoking areas. It is loosely enforced, though, and students are taking full advantage. For every group of students on a sidewalk, it seems there’s always a vapor cloud to walk through just a few steps away.

So what makes JUULs popular?

JUULs are easy to access. They’re small, USB-shaped devices—meaning they can be used discreetly and hidden in the fist of a hand. Users can charge their JUULs on their laptops by plugging them directly into the USB port of the computer. Plus, they come in flavors like mango and menthol.

It’s true that e-cigarettes pose less health risks to users than do traditional cigarettes, but that doesn’t mean they’re healthy. The JUUL, particularly, provides users a potent puff of nicotine. Each pod is the equivalent of one pack of cigarettes, or 200 puffs, according to JUUL’s website.

The fact is no one is totally sure what health risks e-cigarette users will incur because e-cigarettes haven’t been on the market long enough to properly assess their long-term effects. But there are some things we know for sure:

Nicotine is a component in the liquid compounds of many e-cigarettes, and consuming nicotine is a health risk.

In 1994, the FDA officially recognized nicotine as a dependency-producing drug. It’s easy to get addicted to—especially if you’re young and your brain is developmentally susceptible to such substances.

According to Medical News Today, nicotine is at least as addictive as heroin, and it is detrimental to organ health.

According to a medically reviewed article by Healthline, side effects of nicotine on the body include issues with blood circulation like a tendency toward blood clots. It also affects the gastrointestinal system by sharply increasing risk for peptic ulcers and heartburn. The heart may likely experience change in heart rate, increase in blood pressure, risk for stroke and diseases of the coronary artery.

If young people are armed with all these facts, and hindsight is 20/20, and they’ve witnessed firsthand the ugly reality of nicotine addiction in older generations, why are they willing to subject themselves to the past’s mistakes?

There is a new generation of nicotine addicts who understand the risks and are willing to take them anyway. Elements of peer pressure are obviously at play, and the mild euphoria caused by inhaling nicotine is an incentive to use.

But here’s the thing: The same generation that aims to develop innovative resolutions that older generations missed out on is perpetuating this poor health trend. The facts are at young people’s fingertips, and they’ve been pre-exposed to a resolution to nicotine addiction.