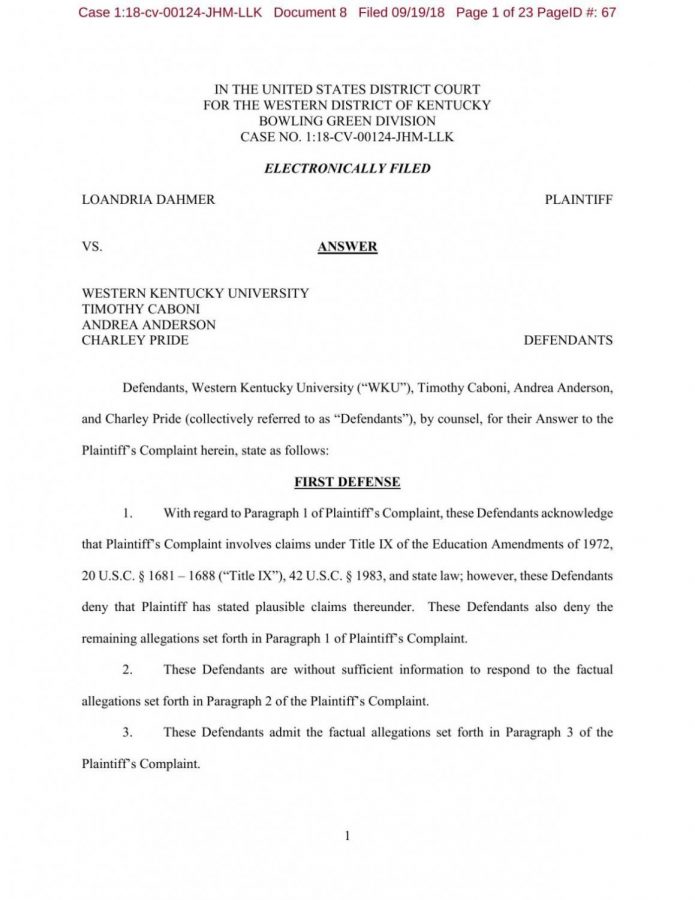 WKU filed a response denying allegations of discrimination made in a lawsuit by former Student Government Association president Andi Dahmer.

On Sept. 19, WKU filed its response to Dahmer’s allegations of discriminating against her based on sex, failing to “reasonably respond and intervene” in the alleged harassment and not following university procedures such as the “Discrimination and Harassment Policy.”

According to court documents, WKU denied Dahmer “suffered from a hostile educational environment” and “suffered sexual harassment and threats at the hands of WKU students in her tenure as SGA president.”

“[Dahmer] never made a report of potential harassment to the Office of Student Conduct or the Title IX Coordinator. Rather, she voiced her concerns to the Hall Director in her residence hall. The Hall Director then notified the Office of Student Conduct, which, together with the Title IX Coordinator, immediately launched an investigation,” according to WKU’s response.

WKU said it responded “promptly and thoroughly to any and all allegations of harassment and found that no violations of WKU’s Discrimination and Harassment Policy had occurred.” According to its response, the university’s investigation “revealed that certain SGA members had violated the Student Code of Conduct,” and those students were “appropriately sanctioned.”

According to Dahmer’s lawsuit and the Herald’s original report, one of the first administrators she met with was Pride, who she said failed to respond and intervene in the harassment. She claimed when Pride asked her to meet with him, he “made derogatory comments to her and essentially berated her for 45 minutes” during the meeting.

WKU denied the allegations against Pride that he did an inadequate job “preventing and remedying the hostile environment.”

Dahmer said she received an anonymous message of a string of GroupMe messages from a group of SGA students who called themselves the “Justice Friends.” In the GroupMe messages, the students referred to Dahmer in gender-based derogatory terms.

In the lawsuit, Dahmer said she was denied her recording of the Title IX meeting she had on Feb. 13, 2018, with Anderson, Director of Student Conduct Michael Crowe and Coordinator for Sexual Assault Services and Student Conduct Melanie Evans.

“Dahmer’s allegation that the Title IX Office refused to provide her a recording of this meeting is severely injudicious,” according to WKU’s response.

According to WKU’s response, Dahmer’s lawyer Lindsay Cordes sent a FERPA Records Request to WKU on May 2, 2018, requesting various records relating to Dahmer, including copies of recorded conversations that Dahmer had with WKU individuals. The Family Educational Rights and Privacy Act is a federal law that protects student education records.

In its response, WKU said it provided a transcript of the recorded meeting and redacted personal identifiable information of other students. WKU also said it provided Dahmer with updates and advised her of her rights in the Office of Student Conduct and Title IX investigation, denying Dahmer’s claims that she had not received news and updates about the investigation.

As stated in the lawsuit, Dahmer claimed Caboni was made aware of Dahmer’s meeting with Title IX officials and made aware that she had “received no messages or updates from the Title IX investigation for multiple weeks.”

Dahmer contended that Caboni was also made aware of the Title IX office’s refusal to release the tape of her meeting with them, which she requested for her personal records. Dahmer claimed Caboni requested the tape from the office and assured her “WKU was doing all that it could to help her.”

Although WKU admitted to Caboni meeting with Dahmer on Feb. 27, 2018, it denied Dahmer’s allegation that Caboni expressed the need for a private follow-up conversation with her about the alleged harassment and did not follow up with her despite Dahmer’s attempts to reach out to him and his secretary.

Dahmer claimed when she reported the harassment to the Title IX office, university officials said her case was not considered a violation of the Title IX policy because it did not meet the official standards of harassment.

“[Dahmer] was informed that based on the preponderance of evidence, behaviors of the subject SGA students did not meet the definition of harassment based on a protected class (gender), and therefore, fell outside the purview of Title IX,” according to WKU’s response.