For celiac students, dining on campus is a challenge 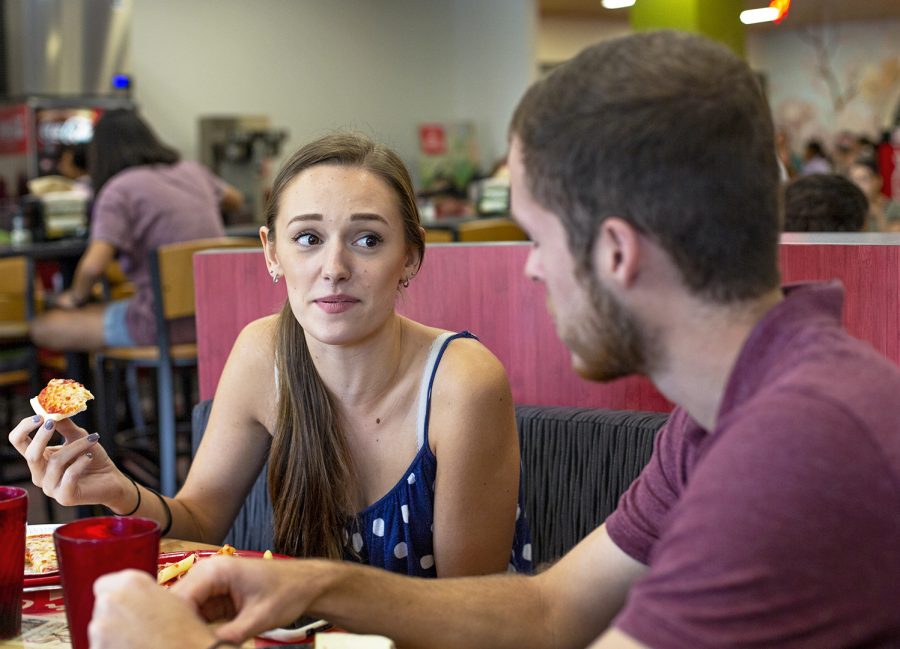 Krista Garrison, a senior from Lexington, eats lunch at Fresh with her friends on Thursday, August 30, 2018. Garrison got her food from the Simple Selections area of the food court, an alternative for students with various dietary restrictions. Garrison has celiac disease which prevents her from eating anything with gluten.

WKU Dining prides itself on the number of restaurant options it offers, but for students with celiac disease, navigating those options can be difficult with dire consequences.

According the National Institute for Health, celiac is a hereditary disease that causes damage to the small intestine, making gluten indigestible for those who suffer from it. One in 141 American adults has celiac, but not all restaurants are prepared to accommodate them.

Shiloh, Illinois, senior Heather Gosebrink was diagnosed with celiac disease in August 2017, just before her second year at WKU. At the time, she was preparing to move onto campus to begin the fall semester.

“I talked to the dietitians on campus my first week of school,” Gosebrink said. “They gave me some information and brochures and told me about how it’s actually considered an ADA condition.”

The Americans with Disabilities Act, was amended in 2008 and requires reasonable accommodations be provided to those with celiac and other issues that affect “the operation of a major bodily function,” Verywell Health reported.

Senior Lane Hedrick was diagnosed with celiac her sophomore year. The university requires all students live on campus and purchase meal plans for their first two years of full-time enrollment unless they file for an exemption, so she had to figure out which places offered menu items safe for her to consume.

“At the time, there was basically nothing,” Hedrick said. “About the only place I could safely eat was Fresh, and the only thing I could eat was salad.”

Hedrick said she hoped to see more options going forward, and that it’s important for dining establishments to recognize “different food allergies and the preparation that individuals [with dietary restrictions] may need.”

While several other restaurants on campus have food made without gluten, they often can’t guarantee no cross-contamination with other meals manufactured in the same kitchen, effectively barring people with celiac disease from eating there. For these people, consuming even a small amount of gluten can cause extreme discomfort.

Senior Krista Garrison has celiac disease and explained that many people fail to understand the severity of the condition.

“People don’t often realize that there’s a difference between food allergies, celiac and just a fad diet,” she said. “My intestines are damaged each time I eat it [gluten], even if it’s just cross-contamination.”

Garrison was diagnosed at age 17 and said she would appreciate more gluten-free options that weren’t just alterations of other menu items.

Garrison pointed out that even major retailers have begun to sell items like hamburger buns and corndogs manufactured in gluten-free facilities, and making those available on the meal plan would be more inclusive to those with celiac, allowing them more dietary variety.

“I think having simple things that are easy to modify would be cool,” Garrison said. “I would like to see Western get caught up with what’s available now.”

Features reporter Sarah Yaacoub can be reached at 270-745-6291 and [email protected] Follow Sarah on social media at @sarah.yaacoub.