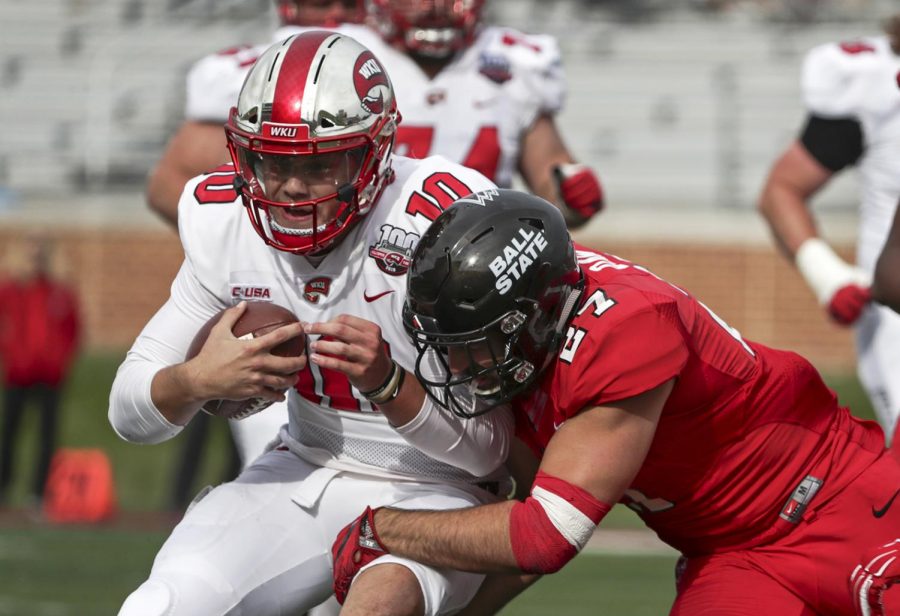 Quarterback Steven Duncan (10) is tackled while rushing by linebacker Jimmy Daw (27) at Scheumann Stadium on Saturday, Spet. 22, 2018. Duncan rushed for 55 yards in the game.

WKU’s first win of the season came thanks in large part to the play of a quarterback who wasn’t expected to be relied on going into the game.

Redshirt sophomore quarterback Steven Duncan, who replaced redshirt freshman Davis Shanley after an injury, led the Hilltoppers to a win in a tight second half against Ball State.

With Duncan’s stellar day, in which he was 12 for 16 for 94 yards and two touchdowns and ran for another 55 yards, the Hilltoppers now have three quarterbacks who seem capable of starting. The health of Shanley and redshirt senior Drew Eckels is currently in doubt, as Eckels has been out since the Louisville game and Shanley suffered an injury during WKU’s win over BSU.

“I felt an opportunity, a second chance,” Duncan said about getting to play after struggling as the starter against Louisville. “It was hard not to put your head down. When God gave me the opportunity, I just kind of looked and smiled, and said ‘thank you.’”

Eckels impressed in the first game of the season at Wisconsin, going 15 for 26 for 167 yards in the first start of his career. He looked even better against Maine, going 24 for 41 for 347 yards and three touchdowns in the loss. But he was injured on the last offensive play of the game and has been out with an upper-body injury ever since.

Shanley saw some playing time against Wisconsin but didn’t see major action until the Louisville game. Coming off the bench, he helped give WKU a second-half lead. He was 22 for 33 through the air with a touchdown, and he earned the starting job for the Ball State game.

Duncan started the game at Louisville but was pulled after two drives in favor of Shanley. Duncan completed 3-of-5 passes but threw an interception on a third down. By coming in and guiding the Hilltoppers to a win against Ball State, Duncan impressed Sanford with his resilience.

“Steven Duncan a week ago was incredibly disappointed in his inability to stay out there on the field,” Sanford said. “Obviously Davis took that opportunity and ran with it, but what I saw tonight was a warrior-type performance from Steven Duncan.”

Duncan, who is not known as a mobile quarterback, was the second-leading rusher with his 55 yards on the ground, second only to redshirt freshman running back Joshua Samuel. Duncan’s longest run was 27 yards, which was the first Hilltopper run over 20 yards in the Sanford era.

“It just opened up, and I ran,” Duncan said of the play. “It was a fun thing to do and those offensive linemen, man, like I said, they opened up a hole and let me go.”

Senior tight end Mik’Quan Deane was the recipient of both of Duncan’s touchdown passes, including an 18-yarder that gave the Hilltoppers the lead for good.

The status of Shanley and Eckels is unknown for this week, but through four games, WKU’s top three quarterbacks have shown to all be legitimate options for Sanford.

Regardless of who starts at quarterback, WKU will take on Marshall (2-1) at 6:30 p.m. Saturday  in Houchens-Smith Stadium. The Thundering Herd are coming off a loss to North Carolina State.