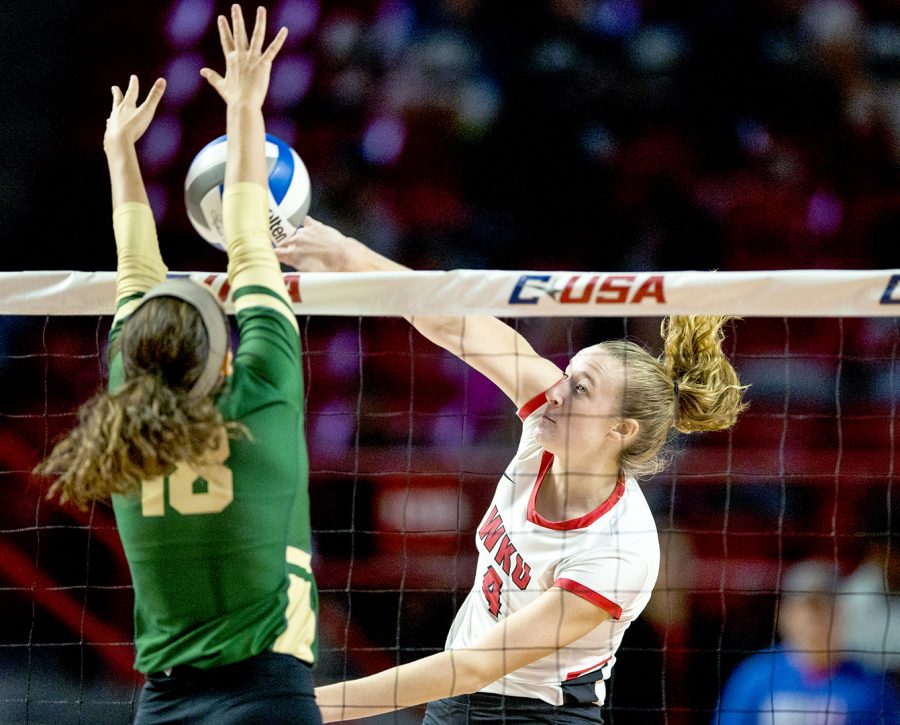 WKU junior Rachel Anderson (4) spikes the ball into the arms of Charlotte sophomore Jocelyn Stoner (18) in the first game of the C-USA Championship Tournament. WKU went on to sweep the tournament, winning it for the fourth year in a row.

The Lady Toppers took an early lead in the first set and never looked back, winning set one 25-22. Sophomore Hallie Shelton led the Lady Toppers in both kills and digs in the set with four each.

The Bearcats took an early lead in the second set before WKU clawed its way back in a tightly contested set to take a 2-0 lead by winning the set 25-23. UC took the third set by a score of 25-22.

The Lady Toppers jumped out early in the fourth set, forcing the Bearcats to take both timeouts in the fourth set before closing out the match 25-18. Senior Rachel Anderson led the team in kills with 17.

Freshman Lauren Matthews returned from injury for her first action in Diddle Arena, finishing with seven kills in her home debut. Matthews said being back on the court felt better than a few weeks ago when she still wasn’t sure if she’d be able to play this season.

“It was a really great experience,” Matthews said. “Coming back from injury is always hard, but I learned a lot from the sidelines.”

Head coach Travis Hudson said he was glad to have his freshman back in the rotation, hoping she can remain healthy going forward.

“You see what a difference maker she is,” Hudson said. “That’s something I’ve been saying since preseason, and it was good to have her back out there. She certainly made a difference.”

WKU takes on Middle Tennessee in Diddle Arena to open Conference USA play Friday. Then the Lady Toppers will close out the weekend on Sunday against Charlotte.