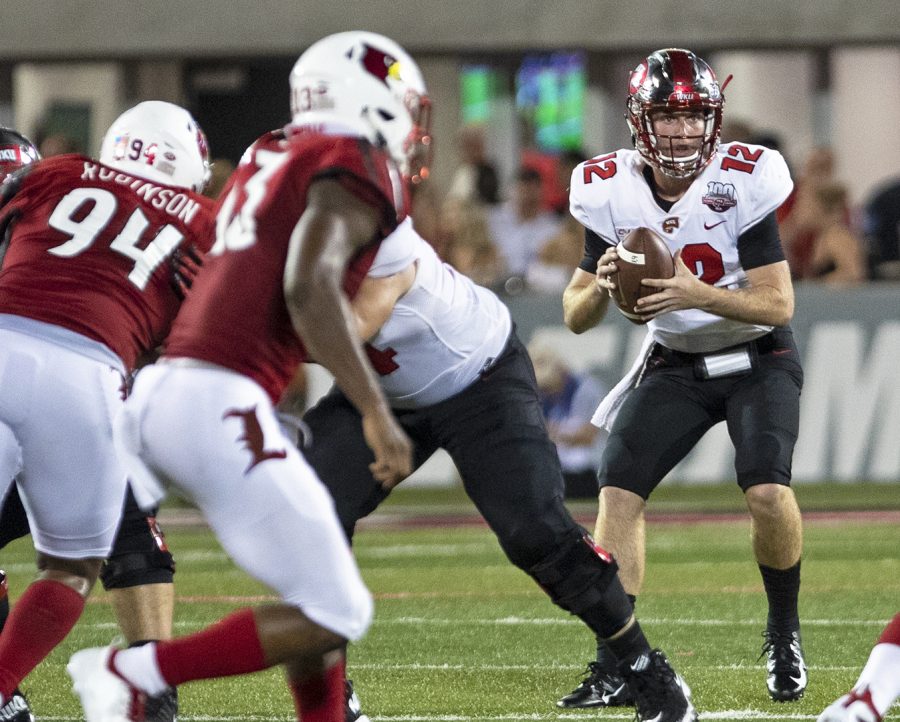 Freshman quarterback Davis Shanley gets ready to pass the ball during WKU's football game against Louisville on Saturday. WKU lost the game 20-17.

Despite blowing a 14-0 lead and falling to Louisville on Saturday, WKU football was happy to see a resurgent run game that produced a total of 168 yards, the most the Hilltoppers have put up under head coach Mike Sanford.

That run game was led by redshirt senior running back D’Andre Ferby, who rushed for 74 yards on 16 carries for an average of 4.6 yards per carry.

This was Ferby’s best performance since 2015, when he rushed for 92 yards against Florida Atlantic. Also adding to the run game were freshmen Joshua Samuel and Garland LaFrance, who combined for 12 rushes and 80 yards.

“We wanted to put the ball in their hands, in the hands of the offensive line,” Sanford said about the run games improvement.

“Those guys made their minds up, and I think the backs, too, were running a lot more decisively,” Sanford said. “Our tracks have improved, in terms of our aiming points and our targeting and our footwork, but I like where the run game’s headed. We’ve just got to be consistent and take what the defense gives us in our scheme.”

The run game was one part of what was a strong offensive attack for the Hilltoppers. Despite not having redshirt senior quarterback Drew Eckels in the game, WKU outgained Louisville in total yards 428-292.

Redshirt freshman quarterback Davis Shanley did not start the game but came in after two series that were led by redshirt sophomore Steven Duncan. Shanley seemed comfortable, completing 22-of-33 passes for 240 yards with a touchdown and no interceptions. He also had a rushing touchdown.

“I think my offensive line played great,” Shanley said. “We’re young and, you know, we’re learning a lot but I think they played amazing. All my credit––I couldn’t do it without them.”

“I’m not going to take anything from Steve, from Drew, or anything at this point,” Shanley said. “The job is always open. Anything can happen.”

The Hilltoppers lost their momentum as the game progressed, falling into the same pattern as they did in the loss to Maine, with five straight drives coming up scoreless. In addition, WKU was snakebit by penalties, committing eight, for a total loss of 69 yards.

WKU also had to take on two quarterbacks on the defensive side, as Louisville starter Jawon Pass was pulled in favor of Malik Cunningham. After the first quarter Cunningham ended up being the spark that Louisville needed, going 10-of-18 for 88 yards and rushing for 129 yards on 21 attempts.

Darden also said, “On the back end, once the wide receiver runs the deep route. He’s going to run around, so you’ve got to plaster and on the front end we’ve got to get the quarterback down.”

Sanford said despite being disappointed by the loss, he felt as if the team was getting close to pulling it together for a complete game win going in to next week’s game at Ball State.

“I think our team is a lot better than everyone else thinks we are,” Sanford said. “We gotta show it.”

Sports reporter Matt Stahl can be reached at 270-745-6291 and [email protected] Follow him on Twitter at @mattstahl97.